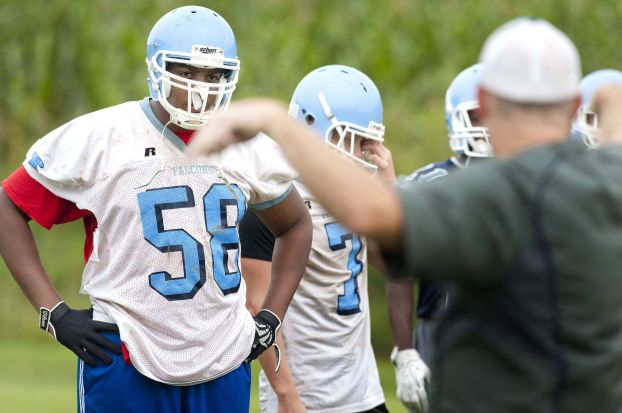 MT. ULLA — Football fields will tilt when West Rowan players sprint on to them this fall.
It was only the second day of practice, but if the eye test is pass/fail, you can go head and promote the Falcons to the next grade. They are absolutely huge, much bigger than they were even in their recent glory days from 2008-10 that included 46 straight victories and three-peat 3A titles.
“Our smallest offensive line starter is 240 pounds and the runt on the defense line is 250,” West coach Scott Young said. “We’re blessed with great size.”
The most obvious size is mammoth junior offensive tackle Hezekiah Banks, who is 6-foot-4, 295 pounds and has attracted interest from the ACC.
Another forceful junior who is super-sized for his position is linebacker Dearius Phillips. He checks in at 230. He’s also pretty fast and looks pretty ferocious.
Young has been around a long time and has made a smooth transition from wide-eyed, exuberant guy to experienced, been-there-and-done-that guy. He’s just returned from a head-coaching stint in the East-West All-Star Game, an acknowledgement that he’s considered one of the state’s best at what he does.
No. 8 wearing light blue at West’s practice is another reminder that Young has been around the block a few times. That’s freshman Bryant Young, Scott’s son, and possibly the quarterback of the future.
“Thank goodness he got his mother’s athleticism,” the coach said with a smile. “He’s got a chance to be pretty good.”
Young is on track to become the all-time winningest coach in Rowan County history in 2015 or 2016 and it could happen with his son at quarterback. That would be quite a story.
Coaching prep football takes a toll on men and their families. Young is entering his 17th season as West’s head coach, and only J.C. Price’s S.W. Lancaster (29 years), Boyden’s Bill Ludwig (21), North’s Larry Thomason (19) and East’s W.A. Cline (17, divided into two stints) managed comparable longevity at one Rowan County schoool.
Lancaster was the coach of Price’s Red Devils when blacks and whites went to separate schools. His teams were unstoppable in the 1940s and early 1950s. He coached two teams to state titles for black schools and posted victories in four different decades. Lancaster’s career record was 183-50-15, and if you throw out the ties, his teams won 76.8 percent of the time.
Young is 164-49 — he’s coached in an era when overtime breaks ties — for a winning percentage of 77.0.
If it happens, Young will be a worthy successor to Lancaster as the all-time leader. Young already has surpassed the win totals of Ludwig, Thomason and Cline.
Cline, Young’s high school coach at East, will be inducted into the Salisbury-Rowan Hall of Fame next week, and Young obviously will join him down the road after his final numbers are written.
West’s disappointing 6-6 in 2013 was Young’s worst record since he debuted in 1998. He’s from the Tony Dungy school of no-excuses-no-explanations, and he doesn’t sugarcoat the Falcons’ shortcomings of a year ago. The loss to Carson was head-shaking, while the loss to Cox Mill was downright bizarre.
“We were close last year, but when you don’t have character you don’t win the close games,” Young said. “When we were winning 10-plus games all those years, we had character. Character — that’s what we’re stressing this season.”
Young is visibly pleased with where his team is on Day 2. While other squads are still figuring out how to line up, West’s special-teams packages appear ready for prime time. Young said the Falcons have enjoyed a tremendous offseason. So far, he’s pleased with the character as much as the beef.
He admits the number of bodies in uniform isn’t quite where he’d like it to be. He has 85 guys, but only 16 are freshmen. He expected 30 freshmen.
“There are some kids that aren’t here that we’ve got to contact,” he said.
West has two scrimmages scheduled. Both are on the road — at West Forsyth and then a four-team jamboree at Thomasville. Young said that’s how the Falcons like to do it in years when they have six home games scheduled.
As far as personnel, the obvious adjustment is Harrison Baucom’s switch from quarterback, where Kacey Otto will start, to a multi-dimensional role. Besides being one of the state’s best punters, Baucom will play tailback and slot receiver and he’ll probably take some “Wildcat” snaps.
With Baucom streaking around and wearing the No. 13, it’s almost like Jon Crucitti, a hero of the state-title teams, has been granted another year of eligibility. Baucom sweeps past teammates, beats them deep on pass patterns and is vocal. He figures to be West’s most dynamic offensive player.
Still, at West, serious success hinges on two things — coaching and dominating the line of scrimmage.
Young’s staff is always stable. Offensive line coach Zach Bevilacqua left for the head job at Porter Ridge, but the other faces are familiar — DBs coach Tim Dixon already has his blue sweatbands on — and there are two coaches for every position.
Even trainer Amber DeDoming, on the sideline since her high school days, has been on duty more than a decade.
“Hard to believe it’s been 17 years since I came here,” Young said. “But the more things change, the more they stay the same. Same practice field. Same cornfields.”
The schedule also remains the same. That means it’s tough. Mooresville and Davie, the neighboring 4As, will get things started. Then rival Salisbury. Then the eight SPC games, and there won’t be many nights off in the league.
Concord is the SPC favorite, but look for the Falcons to contend. No one should have an easy Friday against them.