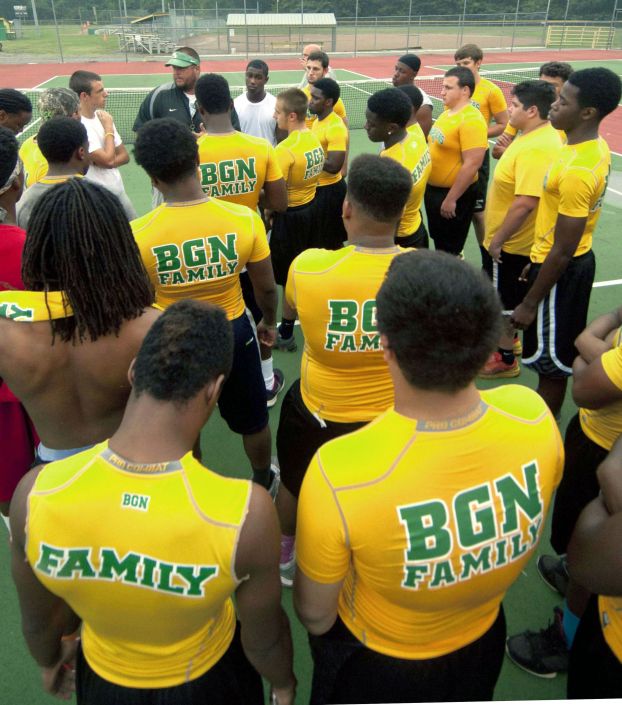 SPENCER — Lots of rain on the first official day of practice didn’t dampen anyone’s enthusiasm at North Rowan where third-year coach Joe Nixon could have another exceptional team.
“We didn’t want to lose a day and we didn’t waste it,” Nixon said. “We were very limited as far as what we could do, but we got some chalktalk done, we lifted in the weight room, and we walked through some special-teams stuff on the tennis courts.”
After a breakout season in which North spent a number of weeks ranked No. 1 in 2A, won a school-record 13 games and tasted victory in the playoffs for the first time since 2006, you’d expect people to be in a good mood. The Cavaliers definitely are.
“We had close to 70 kids come out, and that’s right where we want to be,” Nixon said. “We’ve got all but one assistant coach back, and that’s a great thing. We’re blessed with great assistant coaches. They make my job easier. All I’ve gotta do is stay out of their way.”
Nixon tries hard to be humble. He’s already known a lot of success for a 33-year-old. He was a two-time all-conference player at Clayton High, an All-South Atlantic Conference lineman at Catawba and an assistant coach on three West Rowan state champions before he tackled a building project at North.
The coach of the year in the Central Carolina Conference as well as Rowan County, he’s gotten the Cavaliers back in the 2A-championship hunt faster than anyone imagined. North enters this season with a new level of general statewide respect and a No. 4 preseason ranking by the NCPreps Football News in its classification.
There are some holes to fill, with the most notable one at linebacker where sideline-to-sideline Xavier Robinson was the leader and the Rowan County and CCC defensive player of the year.
As the offensive line coach, Nixon will have the toughest positional job in the coach’s office, at least in the early going. Nick Leverett, a 290-pounder who would’ve been a guy to build a new line around, moved to Concord.
“Basically, we lost all of ‘em on the offensive line,” Nixon said. “We think we’ve got good kids ready to step in there, but we’ll just have to wait and see.”
The reasons expectations remain high for North is that the Cavaliers return their leading rusher (record-setting Jareke Chambers), their experienced quarterback (Alexis Archie) and their best receiver (Sakil Harrison). Those three players were instrumental in North scoring more points (551) than any North team had scored in the school’s 56-year football history.
Besides the offensive ringleaders, there are seven defensive studs with starting experience on hand, plus an experienced kicker.
The Cavaliers will be further strengthened by some serious athletes within the student body. They’ve been focusing on basketball but have decided to play football this fall. Four players who fall into that category could have an impact.
“We’ll wait on the preview to talk about those guys,” Nixon said — but he said that with a smile on his face.
Also making a different sort of comeback is assistant coach Kelly Everhart, who hasn’t been in the North football huddle since 2000. One of the heroes of North’s 12-1 1982 football team, Everhart served as head basketball coach at North for 12 seasons. He’s been helping with statistical chores, but he’ll have an active role this season.
Everhart, who was an excellent kicker, probably can offer advice on the kicking game as well.
“Kelly’s going to help us out mostly with the offensive line and defensive line,” Nixon said. “He’s also going to be a guy who goes up top on Friday nights and gives us information and insight.”
North has two scrimmages planned. The Cavaliers will scrimmage 4A Lake Norman and South Rowan at South on Aug. 13 and North will take on 4A Rocky River in Mint Hill at 7 p.m. on Aug. 15. Rocky River is hosting an eight-team jamboree that day.
North again is tackling an ambitious non-conference schedule, starting the season at home with East Rowan on Aug. 22. Carson, Statesville and 4A Davie will follow the next three weeks.
“We’re not good yet, but we do have a chance to be pretty good again if we can stay healthy,” Nixon said. “Yes, expectations are real high, but we embrace that. The goal is just to play as long as we can.”
The journey for the Cavaliers started quietly on a soggy Friday. We’ll see where it leads.
“For the first day, I think we’re right where we want to be,” Nixon said.