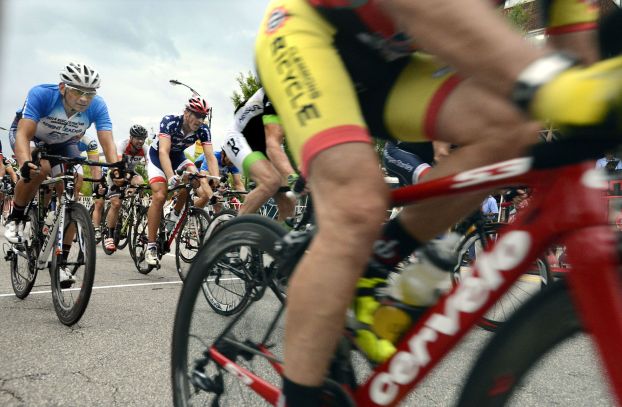 Criterium cyclists pedal on through rain

The Crossroads Cycling Classic, an annual tour of short, one-mile cycling circuits, brought hundreds of cyclists and spectators to downtown Salisbury Thursday night.
More than 100 bicyclists sped through the streets for the Salisbury Criterium, one of six small competitions being held this week throughout the region.
The event opened with women’s race, and other age- and skill-defined groups bombed though the streets after that.
The overcast sky became darker and more ominous as the event went on. Just about halfway through, the sky opened up and the element of precipitation was added to the competition.
Riders were warned about oil slicks from the rain, yet continued to compete. Some released air from their tires for added traction, and others readied spares in the event of a blowout.
Racers ran through the one mile track, essentially styled like a long, winding figure eight. The design of the competition track allowed for impressive speed, with opponents pitted closely together, making for intense turns and brief straightaways.
A heightened level of intensity came from the event being held on closed-circuit public road.
The finish line in front of the Rowan County Courthouse gave spectators an assortment of iconic and historical vantage points. The streets of Salisbury looked like a scene out of a European villa.
Daniel Wilson, a second-year rider competing for Tumult Racing, appeared to have given it his all after coming off of the track saying the race was hard.
“It was a fast-paced race, sprinting out of every turn. Lots of good competition out there,” Wilson said.
There was a lot of good talent, and racers came in from far and wide to compete.
Barb Mackey only came from Charlotte to take in the competition, but her grandson, Sean Rice, came all the way from Clinton, N.J., and he brought his bike with him. Rice is competing in all six nights of the event, which is not a requirement to participate but gives riders a better chance at a win. Along with jerseys being awarded to each of the top racers, there is a cumulative $23,000 to be had in cash and prizes.
Prevent Child Abuse Rowan had a food stand at the event, with all proceeds going to support its work. The organization’s executive director, Beth Moore, was on site. “This is always really profitable for us,” Moore said. “We raise money for things the kids need.”
Many local organizations attended, and there was even a tricycle race — comic relief that seemed to serve as a seventh-inning stretch.
The classic started with races in Mocksville Tuesday and Concord Wednesday. Friday and Saturday the courses will be open for competition in Statesville and Asheboro, respectively.
The event will be back in Salisbury Sunday for the finale, with races to be held around City Park starting at 8:30 a.m. The last race starts at 2:55 p.m. Final awards and podium presentations will be held at City Park.