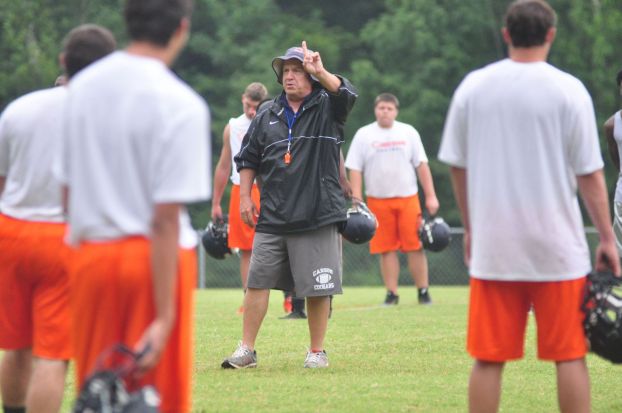 Cougars on a mission

CHINA GROVE — A little wet weather didn’t lessen the spirits of the Carson Cougars Friday evening as they officially opened their 2014 football season.
It will be the ninth football season for the Cougars but more significantly, their second under head coach Joe Pinyan. They are coming off a 7-5 season that included their first ever win against county rival West Rowan plus an appearance in the State 3A playoffs.
Pinyan and his staff have issued 109 sets of equipment for 2014 with about 95 of them present for Friday’s initial workout in a misting rain. Of those, 54 will be on the varsity with the rest on Jayvee.
As expected there are major holes to fill from graduation but the Cougars boast 18 seniors, including several solid athletes who are out for the first time. The have 8 returning starters on offense led by the power running tandem of Brandon Sloop and Darren Isom but none of that really matters to Pinyan in the first few days of practice.
“Going into day one we teach them all like they have never played the game before, “ Pinyan said. “ We start completely over and teach them all the basics”
Pinyan noted that the team had great participation in their offseason weight program and they have just come off a mini-camp last week held jointly with East Wilkes High. The next few days of practice, by state mandate, will be T-shirts and shorts with full body contact not allowed until day five.
Carson will host a football jamboree on their campus on Aug. 12 then have a couple of other scrimmages prior to their Aug. 22 opener with Salisbury High.
Like all Pinyan teams at Carson and previously at Salisbury, the Cougars will subscribe to a familiar philosophy.
“We are going to play hard on defense and force you into mistakes.” he said. “Offensively we would like to keep the ball eight or nine minutes a drive and not let you see it.”
Carson’s run oriented option offense will be anchored by senior halfbacks Sloop and Isom plus talented junior quarterback Andy Lear, up from the JV.
Sloop has been the workhorse of the Cougar attack for the past three seasons, compiling 3,457 yards and 26 touchdowns. He has been the feature back since his freshman year but is now a senior at last. “That means I have just one more chance to play and I will try to make it memorable,” Sloop said.”I think this year is going to be a lot of fun.”
His running mate Isom used speed and power to compile 580 yards and 13 TD’s last season. Lear steps in under center for the graduated Austin McNeill and looks forward to the challenge.
“I am looking forward to being a varsity player and playing on Friday night” Lear said. “I am pretty excited about it.”
Pinyan has praise for his new quarterback. “Andy is probably our best overall weapon back there and he runs our offense really, really well.”
On the defensive side of the ball, Carson has a middle linebacker returning that Pinyan calls “one of the best players in the county this year.” Senior Anthony McCurry (5-10, 205) is a hard hitting ball hawk. “You just follow number 12 and he will take you to the football,” Pinyan says.
“I am in the middle (of the defense) and I do my job to get to the ball,” McCurry says. “It is my last year and I plan to go all out.”
The Cougars also boast a lot of size on the defensive front including 6-4, 220 lb. tackle Ryan Bearden. Veteran Jonathan Rucker anchors the defensive backs.
Friday’s first practice included a lot of repetitive technique drills, getting familiar with their position coaches and the working on little things like how to line up for pre-game warm-ups.
“Today you start on a mission,” Pinyan said to the team as practice got underway. “But the most important thing you should do this season is have fun.”
The Cougars will have fun but also have to navigate the extremely talented nine-team South Piedmont Conference including Concord, West Rowan, Hickory Ridge, East Rowan and Cox Mill.
“The rumor is that if you get through the SPC you get to play Alabama in the first round of the play-offs,” noted a grinning Pinyan. “It is a very tough and deep league but we will compete.”