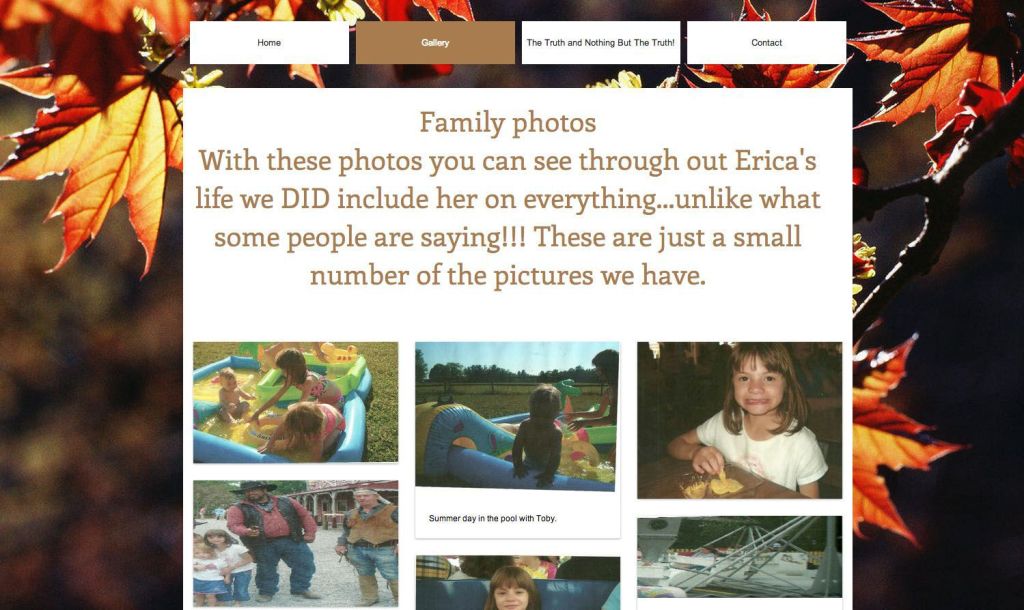 Type into any search engine the name Erica Lynn Parsons and an assortment of websites will appear. Now there’s a new one among those sites, one created by the people who are at the center of the young girl’s disappearance.
Casey and Sandy Parsons, Erica’s adoptive parents, launched www.helpfinderica.com two days ago.
The site appeared July 30, a year to the day since the Parsonses son, Jamie reported his sister missing. He walked into the Rowan County Sheriff’s Office July 30, 2013, and told investigators he’d not seen his sister since Nov. 19, 2011.
Jamie pointed the finger at his parents, Sandy and Casey, leading to speculation as to what the couple knew of the teenagers’ disappearance.
The Parsonses told investigators they let Erica live with a woman they knew as her biological paternal grandmother, Irene “Nan” Goodman, in Asheville.
Detectives and family have said Goodman does not exist and that Sandy and Casey have been untruthful. They were indicted Wednesday on federal charges that they continued receiving government assistance for Erica’s care long after she went missing.
The homepage of the newly launched website includes a black and white picture of Erica and a plea to her and Nan to come forward.
“We love you very much Erica, and I know you know this. We need to know where you are and if you’re safe!! You’re not in any trouble at all. You haven’t done one thing wrong. You know our number please give us call anytime,” the site says.
The website is filled with family pictures of Erica, some of which have never been seen in other media outlets.
A section of the website with the heading, “The Truth and Nothing But the Truth,” includes the Parsonses’ side of the story of how they adopted Erica, refuting claims of abuse and about meeting Irene Goodman.
The narratives are written from Casey’s perspective and detail how Erica came to be with her and Sandy.
Casey says biological mother Carolyn Parsons abandoned Erica and her other children in a Kannapolis motel while Carolyn caught a bus to New York. Carolyn has said none of the information on the site about her is true.
Casey goes on to explain why she told Carolyn that Erica was “here or there and unavailable” because she didn’t want Carolyn “showing up at our home unannounced.”
Investigators believe Erica was never at the home in the summer of 2011 when Carolyn repeatedly asked Casey for home visits with Erica.
Carolyn Parsons did get to meet Erica, but Casey said that was the last time because Erica was uncomfortable being around her biological mother. Casey did, however, say she allowed Erica to stay briefly and then permanently with a woman she’d met a few months before, Irene Goodman.
The website promises drawings of Nan, Strawberry and Kelly. During an initial interview with the Post, Casey told a reporter when she met Nan to drop off Erica there were two women there.
Casey said one woman’s name was Strawberry, but her real name was Janice Jackson. Strawberry was said to have been Billy Goodman’s girlfriend. Billy is Erica’s biological father. Casey also mentioned a woman named Kelly who Casey claimed was Erica’s half sister.
The website includes a page where the family asks people to contact them with information that may lead to Erica’s return.
“Erica is out there. We NOW know we have been told some horrible lies to take one of our babies away from us. Someone has to see her face everyday. I KNOW she is safe, she has to be!
“Please if “Nan” is reading this: Please just drop her off at a safe place she will know what to do. Call me. I’ll meet you anywhere. Most important please take care of our daughter! We love her very much!!,” the site says.
The Parsonses were arrested Wednesday morning on a 76-count criminal indictment that said the two accepted adoption and health care benefits for Erica when she was not living with them. The charges include tax fraud, mail fraud, wire fraud and identity theft. The couple were released, each on a $25,000 unsecured bond.
Casey and Sandy Parsons also must abide by electronic monitoring and their travel is restricted to the middle and eastern districts of North Carolina.
Contact reporter Shavonne Potts at 704-797-4253.