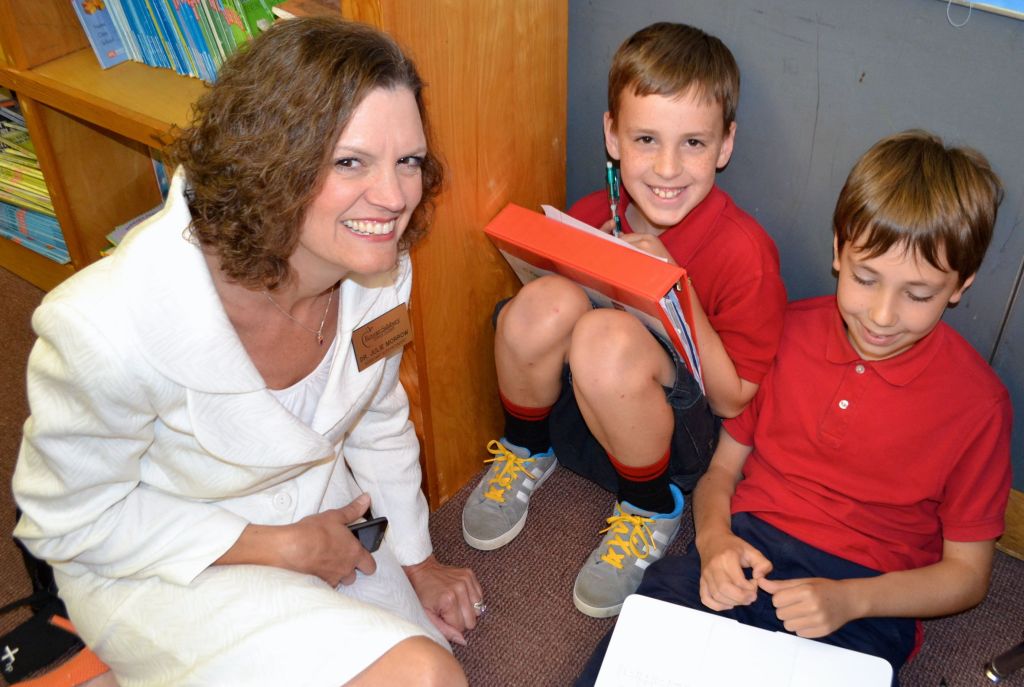 Julie Morrow always knew she wanted to be an educator — not surprising, since she comes from a family of educators.
“Education is just a huge part of who I am,” Morrow said.
As a child, she remembers thinking, “When I grow up, I’m going to make learning exciting.” Her father and grandfather were both superintendents, and her mother and grandmother were teachers.
“I got into education to serve and help others,” Morrow said. Education “creates avenues and opens doors. … I’m very passionate.”
Morrow began teaching in 1989, and has held a variety of teaching, mentoring and leadership positions across the state. Currently, she is the Rowan-Salisbury School System’s assistant superintendent of curriculum. “I love being here,” she said. “It brings all my passions together.”
“My day is never the same, which I love,” Morrow said. “I am rarely in the office. When school is in session, I’m at schools a lot.”
Morrow works with the curriculum team to develop instructional practices and promote engaging learning, and she leads professional development for principals and directors. She also does a good bit of research to find ways to improve the district.
While Morrow is a driven, passionate educator, her career isn’t her first priority — her family is. Morrow met her husband, Tom, in 1989, when she first moved to Mooresville to teach. She joked that it was “hot news in town that a young, single teacher was in town.” A mutual friend suggested that they meet. They did and quickly became friends and running partners. After about two months, they began dating, and one month later, they were engaged. They were married eight months later in 1990.
Morrow said she loves “every minute” of being married to Tom, adding that they have a great partnership. “We share all the responsibilities as a family,” she said. “It’s a team. I love him dearly,” she said.
Tom is a director of merchandising for Lowes Home Improvement in Mooresville.
The couple was married for 13 years before they had children. Now they have two: John, who just turned 12, and Juliana, who is 10. John “keeps us all in line,” Morrow said, adding that Juliana is “bubbly” and “spirited. I cannot imagine our life without them,” she said. “Finding that balance between being a mom and a passionate educator is a delicate balance.” she said.
Morrow makes sure she sets aside time that’s just for her family. “They are at the forefront,” she said. All four of them are avid hikers, Morrow said, and added that vacations are “always an adventure.”
Morrow was born in Tennessee, but her father died when she was 8. When she was 11, her mother remarried and the family moved to West Jefferson. Morrow has three brothers, and when her mother remarried, her stepfather adopted all four of them.
She attended Mars Hill College, where she received her bachelor of arts degree in elementary education. Morrow began her career as an educator in the Mooresville Graded School District, where she taught first through fourth grades for nine years.
While she was teaching, she helped institute a year-round schedule and received her master’s of education in elementary education from the University of North Carolina at Charlotte. In 1997, Morrow moved into a mentor trainer role at the North Carolina Teacher’s Academy. After that, she was accepted into the North Carolina Principal Fellows program, and received her second master’s degree, which is in school administration from the University of North Carolina at Charlotte.
Morrow was recruited and hired straight out of that program to be a principal in Alexander County, where she stayed for four years. In 2003, she received her educational specialist degree from Appalachian State University.
In 2005, Morrow returned to the Mooresville Graded School District to be principal of Mooresville Intermediate School. In her six years in that position, she opened a new school, helped implement the district’s digital conversion plan, and hosted more than 1,000 visitors each year to tour the school, which was, and still is, a national model school.
In 2010, Morrow took a year off to earn her doctorate of educational leadership from Appalachian State University. Upon graduation, she took a job as a school transformation coach with the North Carolina Department of Public Instruction, where she worked with the state’s lowest performing schools.
In February 2013, Morrow became assistant superintendent of curriculum for the Rowan-Salisbury School System. While she isn’t opposed to the idea of becoming superintendent of a school district someday, Morrow said that isn’t her goal. “It’s not about moving up to the next step,” she said, adding her purpose is to support the needs of the community.
“We end up where we’re supposed to be and where we’re needed,” Morrow said. “We’ll see where life takes us.”