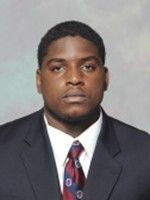 SPENCER — Javon Hargrave is a light-on-his-feet South Carolina State nose tackle who played in the post for North Rowan’s 2011 state-championship basketball team and still tries his hand at hoops now and then.
“I do still play a little bit,” the 6-foot-2, 303-pound Hargrave said with a laugh. “Our football team plays basketball intramurals, and we won it last year. Nobody could guard me.”
That’s not surprising. Hargrave’s 19-point effort in North’s double-overtime win against powerful Winston-Salem Prep was the key to the Cavaliers’ 2011 title run.
When you read a sentence about Hargrave at North Rowan, whether it was a story about football, basketball or track, the words beast or man-child usually appeared in there somewhere.
Since heading to Orangeburg to play for the South Carolina State Bulldogs he’s only gotten more beastly and more man-childish.
“I’m a lot bigger, a lot stronger and a lot faster than I was in high school,” Hargrave said.
After setting school and Rowan County records for fumble recoveries in a season (8) and career (18), Hargrave played in the East-West All-Star Game.
He redshirted his first season at South Carolina State, a FCS program that competes in the Mid-East Athletic Conference with schools such as North Carolina Central, North Carolina A&T and Bethune-Cookman.
In 2012, Hargrave made an immediate impact on the field, recorded 45 tackles and two sacks and was named first team All-MEAC and a College Sports Journal Freshman All-American.
That led to huge expectations prior to the 2013 season, but Hargrave got off on the wrong foot as a sophomore.
“Right at the end of training camp, I sprained my ankle, and it was one those high ankle sprains that is hard to heal,” Hargrave said.
He missed the first two games — a close loss to Coastal Carolina and a lopsided loss at Clemson — and he was still less than 100 percent when he debuted in Week 3.
“I really didn’t feel completely healthy until late in the season,” Hargrave said.
In November, when he was feeling good and the weather was cooler, Hargrave played like an All-American. In a dominating, three-game-stretch against Florida A&M, Morgan State and Norfolk State, all victories, Hargrave was in on 27 tackles, extraordinary work for an interior defensive lineman. He was credited with 7.5 tackles for loss in that spree, including 3.5 sacks.
Then Hargrave added five solo tackles in a first-round, season-ending loss to Furman in the playoffs.
Hargave was part of one of the top defenses in FCS. South Carolina State (9-4) held six opponents to six or fewer points and put up crazy defensive numbers with 63 sacks and 33 forced turnovers. Hargrave was a big part of that with 51 tackles, three forced fumbles, 12.5 tackles for loss and 7.5 sacks.
He salvaged enough of his season in November to make second team All-MEAC, although that was still disappointing after being a first-teamer as a freshman.
Just a few days ago, the All-MEAC preseason team was released, and Hargrave is on the second team.
“That kind of makes me mad, but that’s a good thing,” he said. “That will push me and it gives me something to go after.”
Hargrave is reporting to preseason camp today. This time he hopes to stay healthy.
Some things have changed. Four defensive standouts graduated, while defensive coordinator Mike Adams has moved on to coach the secondary at South Alabama.
Hargrave’s new defensive coordinator is Tommy Restivo, who comes to South Carolina State after coaching DBs at Louisville. He’ll have South Carolina State in a 3-4 defense that is expected to be built around pass-rushing ends Andrew Carter and Alex Glover, with Hargrave anchoring things at nose tackle.
Hargrave’s role is to be active enough to force offensive lines to double-team him, and he’ll be expected to make impact plays if teams try to block him with one guy.
“I can move pretty good,” Hargrave said. “I’m looking forward to flying around out there.”
There are plenty of games for the junior to circle on the calendar.
The opener is against low-profile Benedict on Aug. 30, but then South Carolina State ventures to play Clemson in Death Valley on Sept. 6. That promises to be a challenging affair for the Bulldogs.
“I was out for Clemson when I was hurt last year,” Hargrave said. “There will be a lot of fans and it’s going to be very hot, but I’m looking forward to it.”
South Carolina State also hopes to pay back close losses to Coastal Carolina, Furman and Bethune-Cookman.
Hargrave won’t get to visit his home state this season. South Carolina State is taking on North Carolina A&T in Atlanta and is hosting North Carolina Central in Orangeburg.
“I’ve still got a lot of family that won’t miss our home games,” Hargrave said.
Hargrave is on the early list of potential NFL draft picks for 2016 and is rated among the top 100 defensive tackles, If he stays healthy, he’ll have a chance to move higher on that list in his last two seasons.
“When I saw (former West Rowan defensive end) Chris Smith get drafted, I was very happy for him,” Hargrave said. “When one person gets through, when one person makes it like that, it lets you know that there’s a chance for more guys to make it.”