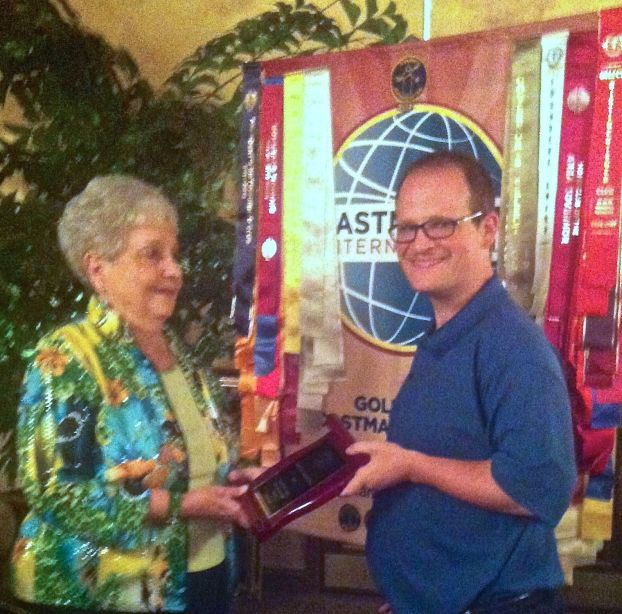 Kannapolis City Board of Education member Millie Hall is the 2014 winner of the Goldmine Toastmasters Club Communication and Leadership Award.
The annual honor is presented to a community member who has contributed significantly in leadership and has exhibited exceptional communication to the public.
Hall has been serving the children of the community for nearly 40 years. She was part of Kannapolis City’s first-ever elected school board in 1978 and is serving her 10th consecutive term on the board.
Hall has also served the community in other capacities. She was the first woman to become chairperson of the Kannapolis Chamber of Commerce, and she was the first person — male or female — to serve two consecutive terms as chair. She won a Special Volunteer Award from Gov. Jim Hunt and was honored with the Governor’s Award for Education.
She has served on the board of directors of the N.C. School Boards Association, and she has been named the North Carolina Woman of the Year by the state’s Business and Professional Women. She also has received North Carolina’s highest civilian award, the Order of the Long Leaf Pine.
Previous recipients of the Toastmaster’s Communication and Leadership Award include Judge Clarence Horton, former Kannapolis Mayor Bachman Brown, former Chamber President John Cox, and Ed Hosack of Cooperative Christian Ministry.
Hall received her award July 19 in Concord.
Krispy Kreme in Salisbury is doing a back-to-school supplies drive. For every item you bring in, you get a free glazed doughnut. If you bring in a book bag filled with school supplies, you get a free dozen glazed doughnuts.
The store will be collecting donations until Sunday, Aug. 31.
More than 63 percent of Rowan-Salisbury students are eligible to receive free or reduced lunch, which means nearly 10,000 students in the school system may start the school year without the needed supplies, according to Communities in Schools. Having school supplies available to children helps them feel equal to the rest of the children starting school.
Supplies can be donated at a number of locations throughout the community, including:
Now until Aug. 15
• Belk, 1455 Klumac Road
• First Baptist Church, 223 N Fulton St.
Aug. 1-15
• The Gateway Building, 204 E. Innes St.
• Novant Health Rowan Medical Center, 12 Mocksville Ave.
• High Rock Church, 710 Jake Alexander Blvd. West
• Division of Workforce Solutions, 1904 S. Main St.
Aug. 4–15
• All F&M Bank locations
Aug. 9 is postal collection day. Items left at mail boxes will be picked up by mail carriers.
If you need your items picked up or you would like to host a drop off location, call 704-797-0210.
This is Communities in Schools’ 15th year of collecting supplies for area children. The distribution will be on Saturday, Aug. 23, from 9 a.m. until 11 a.m., and will be located in First Baptist of Salisbury Community Center at 220 N. Fulton St. Supplies are first come, first served until they run out. All children must be enrolled in the Rowan-Salisbury School System and be accompanied by a parent or guardian on the day of the distribution.
Schneider Electric, Freightliner, Food Lion, First Baptist of Salisbury and Church Women United are supporters of the drive.