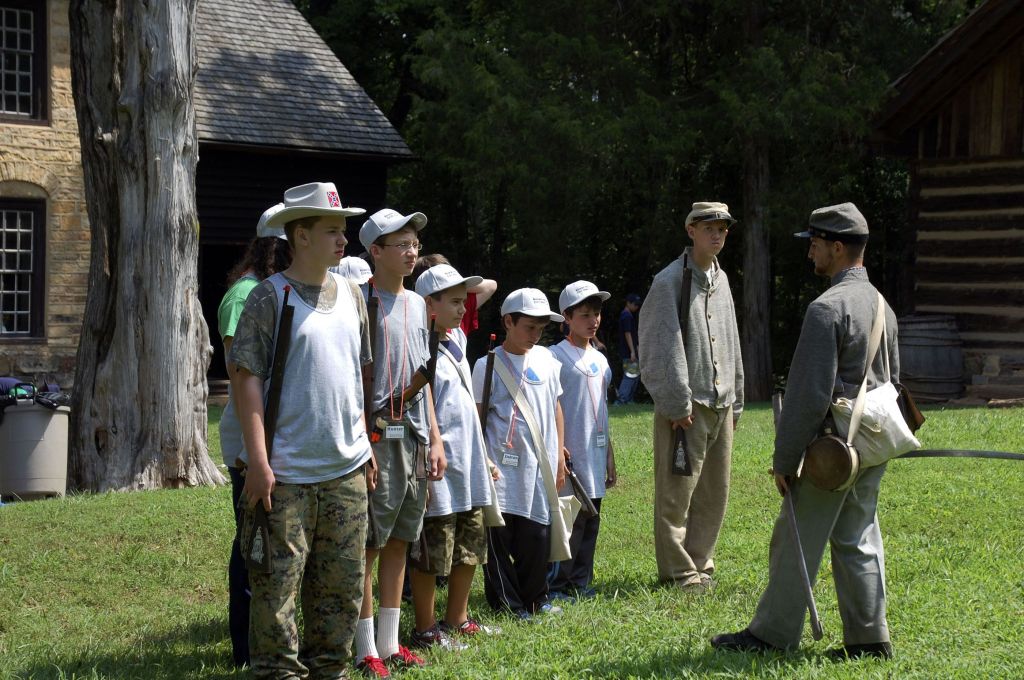 GRANITE QUARRY — Union and Rebel soldiers clashed Wednesday in the woods around the Old Stone House.
The South won this particular battle, but as you know, not the war, as a group of 16 middle schoolers continued their participation in Rowan Museum’s weeklong Civil War Camp.
Monday morning, during the first day, campers — 12 boys and four girls — drew marbles putting them in either a Northern or Southern company.
For the rest of the week, they have been delving deeply into the routines and challenges facing Civil War soldiers. It all leads to Gen. George Stoneman’s 1865 raid on Salisbury, the South’s surrender, a short awards program for the campers and the bugler’s playing of Taps Friday afternoon.
This is the fourth Civil War Camp offered by the Rowan Museum. The days last from 8:30 a.m. to 2 p.m. Along the way, the campers have been given the cursory physical and mental checks common for the day, sworn in, issued equipment, led through drills and marched from place to place.
They’ve learned Civil War songs and games, made military flags, written letters home and eaten typical soldiers’ fare.
With the help of experienced Civil War re-enactors, the kids also have experienced camp life and learned about weapons and medical treatment.
Over today and Wednesday alone, the campers found themselves waging war, conducting prisoner exchanges, landing in field hospitals and being part of solemn burial details.
Group and individual photos, made to replicate tintypes taken during the Civil War, were shot Tuesday, with the kids dressed out in authentic uniforms supplied by Luther Sowers.
Throughout the week, the campers have been introduced to significant Civil War-related spots, such as the Salisbury National Cemetery, the Hall House, the Confederate statue, Clyde’s Salisbury Confederate Prison guard house and the Civil War-era courthouse where the Rowan Museum is now located.
Kay Brown Hirst, executive director of Rowan Museum, says the camp gives the students a deeper understanding of the Civil War that stays with them because of all the hands-on experiences.
Wednesday was spent on the grounds of the Old Stone House, where the highlight of the day was a battle between the Union and Rebel forces, leading to (fake) wounds, fatalities and prisoners.
A medical triage area also was set up, where the campers employed their knowledge of bandages in treating the bloody (again fake) wounded.
Prior to the battle, Civil War re-enactors Simon Connolly and Jonathan Hawkins gave loading and firing demonstrations of an Enfield rifle and Remington revolver.
The campers peeled potatoes and shucked corn as part of a campfire preparation of their lunch that also included Johnny cakes, bacon, fatback, soup and watermelon — the kinds of things soldiers could secure from farms along the roads.
The folks helping with the Civil War Camp this week include Hirst, Sowers, Clyde, Connolly, Hawkins, Andrew Poston, Whitney Hawkins, Terry Holt, Tricia Creel, Dustin Walters, Alden Wright, Erin Ansboro, Spencer Lambert and Andrew Goodman.
Rowan Museum will hold a camp related to Colonial times for elementary school students Aug. 11-15. That camp can accommodate 30 kids, and Hirst said a few slots are still open.
Call the museum at 704-633-5946, or try emailing rowanmuseum@fibrant.com