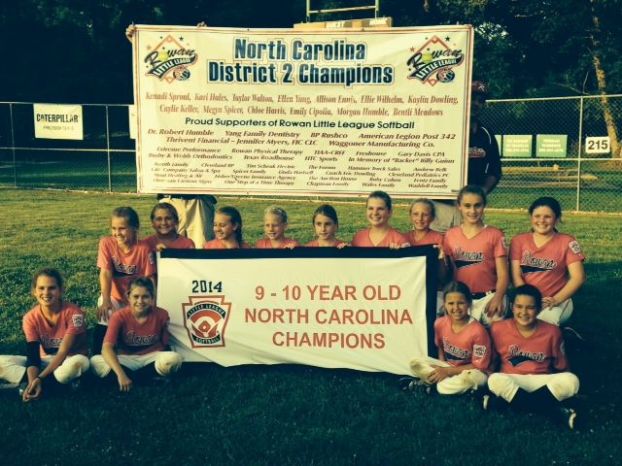 Rowan County Little League’s 10U softball team won the Southeast Regional in Clarksville, Tenn., on Tuesday night.
Rowan rolled 10-0 against West Virginia in four innings.
Taylor Walton pitched a one-hitter.
Caylie Keller made an outstanding catch in left field, and second baseman Ellie Wilhelm and catcher Ellen Yang also were key defensive players.
Kary Hales had two doubles and four RBIs.
Walton had two RBIs.
Kaylin Dowling and and Allison Ennis had two hits each. Dowling doubled.
Bentli Meadows had a single.
Rowan lost an extra-inning game in the regional to West Virginia but came back to go 5-1 in the tournament and beat West Virginia twice.
The team has finished its season and is expected to return to Salisbury Community Park at 7 p.m. tonight.
Shelby Post 82 beat the Gaston Braves twice on Tuesday in Lexington — 10-6 and 7-2 — to capture its eight American Legion state championship.
Shelby lost twice on the field in the state tournament, but a 12-5 loss to High Point became a forfeit win when High Point was disqualified. Shelby also avenged an earlier loss in the tournament to the Gaston Braves.
Shelby (44-2) advances to the Southeast Regional in Asheboro that starts on Aug. 7. Host Randolph County (14-21) will also be in the eight-team field, along with state champs from Florida, Alabama, Georgia, South Carolina, Kentucky and Virginia.
The South Atlantic Conference will hold its first-ever Football Digital Media Day on Monday, Aug. 12, offering media and fans alike a unique opportunity to interact live with the league’s head coaches.
SAC head coaches will answer questions submitted from media and fans live at www.theSAC.com between approximately 10:05 a.m. and 12:05 p.m. on Aug. 12. Questions for the coaches will also be accepted via Twitter, using the hashtag #SACFB. Each coach will field questions for approximately 15 minutes.
Catawba coach Curtis Walker is scheduled to answer questions from 10:05 until 10:20.
SAC Football Digital Media Day will coincide with the release of the 2013 SAC preseason coaches poll, offering participants exclusive access to initial reactions from the coaches.
SAC football is coming off an exciting 2013 season in which Carson-Newman and Lenoir-Rhyne earned selections to the NCAA Division II Football Championship and a total of 13 student-athletes were named All-Americans. Five returning players from the conference have also been selected to the 2013 BSN Preseason All-America Team.
Dylan Cozens drove in four runs to lead the Lakewood BlueClaws to a 7-2 win against Kannapolis on Tuesday in New Jersey.
Kannapolis (50-56, 21-18 second half) is off today and starts a series at home against Augusta, a San Francisco Giants farm team, on Thursday.
As the ARCA Racing Series makes its second stop at Pocono Raceway, Team BCR’s driver, Justin Allison (West Rowan) will have another chance at capturing his first victory.
Allison topped the leaderboards during the afternoon session at the Pocono ARCA Racing Series open test in June. Allison qualified the No. 88 Havacosales.com, Rush Racing Products Ford Fusion in third and finished the Pocono ARCA 200 off in fifth for his debut.
“I feel really confident getting back to Pocono,” Allison said. “We had a car that could win back in June, so I sense we’ll be very strong this week.”
Allison will go into the ModSpace 125 with two top-5 and four top-10 finishes under his belt.
The race will be broadcast live on Fox Sports 1 at 5pm ET on Friday.
The Corbin Hills Women’s Golf Association played a T’s & F’s tournament on Tuesday.
Sharon Deal was first, Beth Calhoun took second, Susan Morris was third, and Bev Cobb was fourth. Next were Cindy Camrmazzi, Betsey Edgeworth and Louise Collins.
Mary Seaford won low putts for the day.
• Kannapolis’ Rick Lewallen shot 70-71 — 141 and tied for fourth in the Carolinas PGA Senior Championships in Leland.
Wake Forest coach Jerry Haas shot 71-64 to win the tournament by three shots.

Rowan Little League is currently taking sign-ups through Aug. 24 at Godley’sGarden Center for its fall baseball and girls Softball leagues.
Online registrations are being accepted at http://www.rowanlittleague.com.
Fall ball is for ages 3 to 14. Cost is $50. Baseball ages are as of April 30, 2015 while softball ages are as of Dec. 31, 2014.
Games begin after Labor Day.
Contact Wade Furches at 704-633-2873 or Jeff Bernhardt at 704-326-5255 for more information.
Former West Rowan, Virginia and Appalachian State standout Donte Minter’s basketball camp has been rescheduled for Aug. 11-14 at Hall Gym. Camp is for grades 2-11 and is from 9 until 1 daily. Camp price is $65.
The camp will provide food for the campers, daily prizes and camp T-shirts. If anyone has any questions, contact Minter at 757-547-6516 or email donte.minter@gmail.com. Minter is looking for sponsors to help prepare the campers to go back school with donations of school supplies.
Hall of Fame Committee director Jack Ingram announced four new inductees to the Pfeiffer Sports Hall of Fame.
Inductees are Beth Bennett Welsh, swimming (Class of 1980), Rex Mitchell, basketball, coaching (‘74), JIm Waugh, baseball (‘79) and the 1992 men’s basketball team.
The date for the Hall of Fame event is Friday, Dec. 5.

CHINA GROVE — Carson enjoyed its favorite meal on Monday night — spaghetti — the same fare on which the... read more