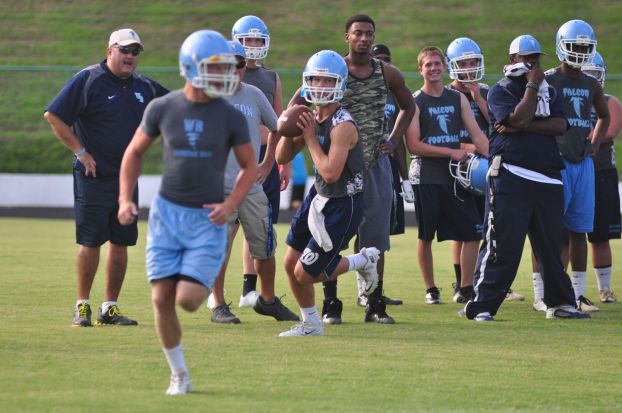 The popping sound of shoulder pads meeting you hear this time of year are the football equivalent of baseball bats cracking from contact in February.

Both mean that the season’s just around the corner.

The official start date for practice is Friday and teams generally don’t wear full gear until a few days after, so you won’t hear that wonderful echo for a few days.

It certainly is for the Cavaliers, who have been itching to get back at it after an undefeated regular season last year. They’ll face East Rowan in their opener on Aug. 22.

West Rowan, which won three consecutive state 3A crowns not long ago, was also active Tuesday, traveling to A.L. Brown for a 7-on-7 at Memorial Stadium.

“It was great competition for our linemen and our 7-on-7 guys,” West coach Scott Young said. “We know we’ve got several areas we have to improve in and have to do a better job.”

Kacey Otto and Kortez Weeks shared time at quarterback during the night.

Otto took the first snaps on offense and struggled to find rhythm with his receivers. Weeks aired out several deep balls, completing a long pass to receiver Shakir Simmons. Young says he hasn’t named a starter yet and will need another week to determine a starter behind center.

Last year’s quarterback Harrison Baucom will likely be utilized at tailback and receiver in addition to being a pretty good punter.

North continued a youth football camp that concludes today. Nixon said they had around 60 campers ranging from third to eighth grade. Many returning NR players like Jareke Chambers, Wesley Jefferies, Kenyaun Coney and others were on hand to give instruction.

“It’s a great turnout,” said Nixon, about to enter his third year in Spencer. “It’s great to get these kids out here and help them improve.”

North is ranked fourth in the NCPreps 2A preseason rankings after spending much of last season ranked No. 1. The Cavaliers broke a school record last season with 13 wins and reached the third round of the playoffs.

J.K. Adkins, who was an assistant under Pinyan at Salisbury, is the head coach at East Wilkes. The Cardinals spent the night at First United Methodist Church of China Grove and ate meals at Carson.

East will hold a midnight madness practice Friday night. East has a new head coach in Kenneth McClamrock. A former Concord assistant under Glen Padgett, he’s in his first year at the controls with the Mustangs. East went 4-8 last season.

Salisbury and South Rowan are looking to get back to respectability after missing the playoffs last season.

CHINA GROVE — Carson enjoyed its favorite meal on Monday night — spaghetti — the same fare on which the... read more