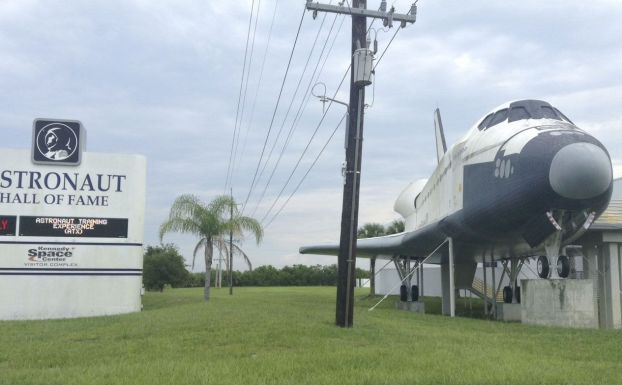 Another day of heat, rain and some sightseeing

With just a little bit of light in the sky, I left Mike Strauss’ house in Ormond Beach this morning. Mike was the perfect host, even getting me to ride that beach bike for the first time on Ormond and Daytona Beach sand. It was fun, but very different.
I rode over the Ormond Beach bridge this morning, and then along Riverside Drive as I headed the back way to and through Daytona. The route took me through the downtown area, where I saw signs for the Daytona International Speedway. Mike told me yesterday that part of where we rode on the beach was where the first Daytona race was held.
By the time I got out of town, I was back on U.S. 1, a comfortable friend. There is usually a good shoulder, plenty to look at, and enough stores to keep me hydrated and fed.
I got off of U.S. 1 long enough to ride through New Smyrna, one of the prettiest little towns that I have seen. The houses, many of them historic, were all along the river. There was something that looked like an old fort, but it was actually the foundation of a long-ago British hotel.
Back to U.S. 1, I passed through Edgewater, Oak Hill, Scottsmoor and Mims. During this time, it got really hot, then very cloudy with thunder and lightning, and finally some rain. Just enough once again to cool off things for several hours. I was looking for places to go if the bottom fell out, but it never did. Seldom have I seen the highway so empty of traffic as it was today.
Throughout the day, and even yesterday, I had considered stopping near Titusville to see some of the space coast stuff. There is an Astronaut Hall of Fame and of course the Kennedy Space Center. The space center is 61/2 miles off course, meaning 13 total, so I chose to start with the Hall of Fame. I paid almost as much as I have been paying for a motel to tour the place. One of the space shuttles is there, and some good stuff otherwise. However, even though there were stairs leading to the front and back of the space shuttle, it was not open for touring. Other exhibits also were not open, like the machine that puts you in 4g gravity and the Mission to Mars simulator. It did have some cool stuff, like Wally Schirra’s Mercury space capsule and one of Alan Shepherd’s space suits. Not many people were there and most didn’t stay long. The place was not kept up well, and the grounds needed lots of attention. They want you to buy a package ticket with the space center, and all this makes me wonder if it is in good shape. I will see it another time.
Titusville is a busy and happening town. Plus they are tearing up U.S. 1 for miles and miles to widen and resurface it. I rode through that to Cocoa, home of Major Anthony Nelson and Jeannie from “I Dream of Jeannie.” Total mileage for the day ending in Cocoa was 76, a lot easier than it would have been with the heat lasting all day. Storms were all the around the area, several bad ones hit the Orlando area.
Tomorrow, it will be up and out early to beat that heat again. My plan is to make it somewhere near the Vero Beach area, mostly again traveling on U.S. 1 and A1A. Lots of good beach views and maybe some more sightseeing. I am keeping my eyes open for good things to see. Key West is just 388 miles away, and we should whittle that total down again tomorrow. My wheel dipping day is Aug. 6, if all goes well.
Thanks again to all of the sponsors and for all of the folks who are sending well wishes, comments and information. It has been a heck of a good ride so far, and I know I have lots of you riding along.
Rowan County resident David Freeze is cycling from Bar Harbor, Maine, to Key West, Fla. Contact him at david.freeze@ctc.net.