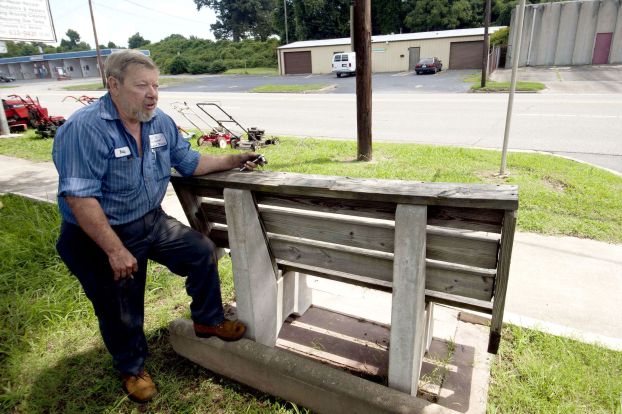 SPENCER — For about 10 years now, outside Piedmont Radiator Works, a Spencer bus stop has featured a high-backed, wooden bench braced on two concrete pillars.
The bench is a popular place, especially because of a tall pecan tree giving the spot shade. During the school year, at least seven kids pick up their school bus here at South Salisbury Avenue and Spring Hill Lane early in the morning.
Joggers and walkers sometimes stop at the bench for a rest, and people heading into Salisbury wait for the city bus.
Buddy Barringer, owner of the radiator shop, can’t help but notice all the activity.
One day, a bicyclist rolled up, took off his backpack and lay down along the length of the bench.
“He was a-snoozin,’” says Barringer, who saw no reason to disturb him.
The bench has special meaning to Barringer because his late brother, Terry, built it as a rock-solid memorial for their father, Melvin.
“You can shake it, it ain’t going nowhere,” Buddy Barringer says.
With Terry’s death Jan. 4, 2011, Buddy now looks on the bench as a tribute to both his father and brother. So does his across-the-street neighbor, Doug Ray of Spencer Cycle.com., who was good friends with Terry.
“Every January, I think of him,” Ray says. “I miss him, I do. He always had something going on.”
The bench also is unusual because, for being such a public piece of furniture, it’s really private property belonging to Buddy Barringer.
In fact, Spencer officials long ago asked the Barringers to mark it as such, wanting to make sure the town wasn’t liable if someone were injured around the bench.
Terry affixed a brass plate on the top board with the word “private” etched into it.
Buddy apologizes for how dull the bench’s wood looks today. Terry used to brush a coat of shellac on it about once a year and keep it in better shape. Still, it’s a handsome design — one Ray thinks Spencer would be wise to repeat around town.
“Terry did keep that thing up,” Ray says. “Terry was proud of that bench. He really was.”
Buddy Barringer remembers when Terry built the bench and fashioned the pavers and concrete curbing around it.
All the materials were stuff that was over-ordered or leftovers salvaged from construction sites. Terry Barringer had a buddy in the concrete business who provided the pillars, which Terry imbedded firmly into the ground as base for the bench.
“You ain’t going to tilt that thing over,” Buddy says again for emphasis, guessing that just one of the concrete legs weighs about 300 pounds. “… It’s pretty stout.”
Among other things, Buddy Barringer fixes radiators, works on vehicle air-conditioning, welds parts together and even has a lawn mower repair and sales business on the side.
His dad, Melvin, bought the business about 44 years ago from Pay Day (Paul Dewey) Jones, who established the shop in 1946. Buddy has worked in the shop since he was in his late teens.
He remembers having the choice of going to work for Food Town at $50 a week, or the radiator shop with his father at $30 a week. He chose his father’s shop.
Any regrets?
“Once in awhile, I do regret it,” he says, with a chuckle.
Ray has plans to make another plate for the bench to remember Terry and maybe provide a little history behind it.
Meanwhile, the bench continues to be a “private” rest stop where the public is more than welcome.

Theresa Brandt refers to the tattoo on her lower right leg as “my reality check.” The tattoo is a voluptuous,... read more