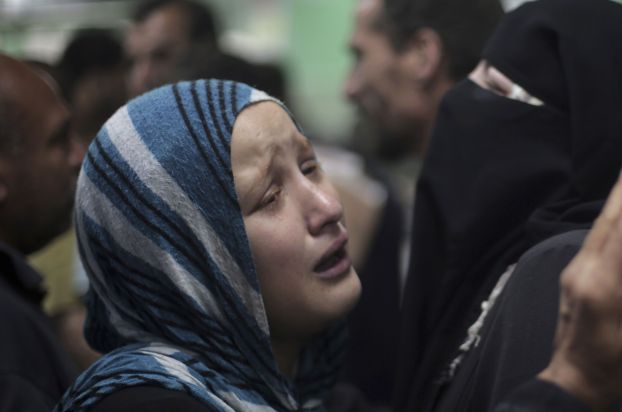 Your daily look at late-breaking news, upcoming events and the stories that will be talked about today:
1. ISRAELI TANK SHELLS SLAM INTO UN SCHOOL IN GAZA, KILLING 15

The strike that hit the crowded compound sheltering the war displaced comes amid Israel’s heaviest air and artillery assault in more than three weeks of conflict with Hamas.

2. ABOUT 150 MAY BE TRAPPED IN LANDSLIDE IN WESTERN INDIA

Federal rescue workers are hampered by continuing rains and poor roads leading to the village of Ambe in the Maharashtra state where the disaster buried about 40 houses.

Officials in the city of Donetsk say 19 people are dead in fighting between the government forces and pro-Russian separatists.

Stocks take a tumble in Moscow after coordinated sanctions are aimed at increasing pressure on Putin to end his support for separatists in eastern Ukraine.

The measure is intended to help veterans avoid long waits for health care, hire more doctors and nurses to treat them, and make it easier to fire senior executives at the Veterans Affairs Department.

6. AS WEALTHY CATALONIA EYES INDEPENDENCE, A NEEDY SPAIN HOLDS ON

The region’s secession campaign promises profound consequences for the country as it emerges from its worst economic crisis in a generation, with the moneymaker as a major driver of growth.

7. IN STING, KIDS ARE FOUND WHO WERE NEVER REPORTED LOST

In a weeklong effort by the FBI to rescue child sex trafficking victims last month, 168 juveniles recovered, some as young as 11. Among them was a group that particularly troubles child welfare advocates: those whose disappearance was never made known to authorities.

The country’s Espirito Santo family business survived wars, dictatorship, revolution and family feuds for almost 150 years. Now, it is being stripped of its wealth and influence amid accounting irregularities, huge unreported debts and a police investigation.

9. WHY NYC MULLS LAW FOR IMPERSONATORS

The city officials are turning up the heat on Times Square costumed characters in a bid to rein in a summertime spike in badly behaving characters, such as the Spider-Man accused of punching a police officer recently.

10. WHO IS STAYING IN THE BOOTH FOR THE LOS ANGELES DODGERS

Vin Scully, the 86-year-old Hall of Fame announcer will return for his record 66th season with the team in 2015.