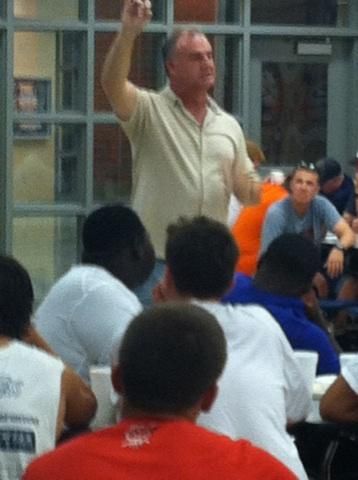 CHINA GROVE — Carson enjoyed its favorite meal on Monday night — spaghetti — the same fare on which the Cougars dined on that historic evening when they beat West Rowan in football for the first time.

The Cougars have won in the playoffs, but that night against West still ranks as the biggest thrill for everyone involved with Carson football.

First United Methodist Church of China Grove provided the salad, beverages and spaghetti that were served in the Carson cafeteria.

Tommy Barnhardt, who has seen a lot of football and a lot of life and who played at the highest level from 1987-2000, provided the meatballs in the form of his inspiring life story.

“Success isn’t a straight shot,” Barnhardt informed an assemblage of football players and coaches that included not only Cougars, but members of the East Wilkes Cardinals who are camping with them. “Success comes from a series of adjustments.”

Carson’s connection with East Wilkes comes through the head coaches — Joe Pinyan and J.K. Adkins. They worked for years together building a strong program at Salisbury.

Barnhardt is a South Rowan guy.

“But we won’t hold that against him,” Pinyan said, as his players hooted.

“When I was 8, my team lost every game by at least 50 points and I hated it,” Barnhardt said. “I wanted to quit. My dad wouldn’t let me. He told me once you start something, you see it through.”

As South’s 6-foot-3 senior quarterback in the 1980 season, Barnhardt was the Rowan County Player of the Year. He could throw — he’d won pass, punt and kick contests all over the place growing up — but his idol was the Oakland Raider’s thunder-footed punter Ray Guy, and his forte was always punting. He was a 40-yards-plus guy in high school, one of a handful in Rowan history.

Barnhardt became the first-string punter at East Carolina and later UNC, although he wasn’t granted a scholarship until his final year at UNC.

His college career was basically a long string of proving-people-wrong moments.

There was a good lesson that came out of Barnhardt’s trials and tribulations in college.

When he finally did get that scholarship from UNC coach Dick Crum, it came not because of his punts but because of the diligence with which he pursued excellence in the weight room. Always the first to arrive and last to leave, he convinced an assistant he deserved a scholarship.

There was a point when Barnhardt was still trying to establish himself in the NFL and was renting an apartment with two other hopefuls, working out, working at a shoe store, praying a lot, and just trying to survive. He had $20 a week to live on after the bills were paid.

He got a chance to kick with in the NFL the Saints and Bears in 1987 — he even punted in a frostbite-weather playoff game — but then he was cut again.

Barnhardt cried himself to sleep a few nights and convinced himself that as much as he’d loved football, it had never loved him back. He had a college degree and was ready to try sales when the Washington Redskins called. Their punter was injured, and they invited Barnhardt to attend a tryout.

His first reaction was “No way,” but his father convinced him to stick with his dream. He got that job, and the rest is history.

He led the NFL in punting yards with the Saints in 1991, and he ranked third in the league as the Panthers’ first punter in 1995.

“You always have to go through tough times to get to the good times,” Barnhardt told his audience. “But the tougher the times, the bigger the blessings.”