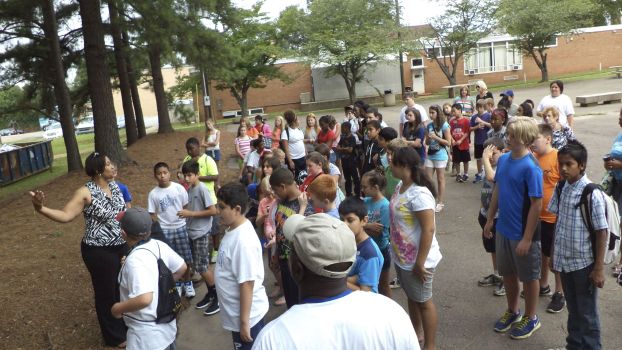 A group of sixth graders crowd in front of the gym at Livingstone College on a humid summer morning. Their guide, Senior Assistant Director of Admissions Tonya Feimster, asks if any of them want to attend college, and a few hands shoot up.

“Now, I know you all want to go to college,” Feimster says.

The rest of the group raises their hands.

These 118 rising sixth graders are participating in a five-week summer program called “FILM @ 6.” The grant-funded camp was created to improve STEM learning and to help students adjust from elementary school to middle school—a change that is often difficult for kids and parents, Program Director Sandy Buechler says.

“The real push is to make the transition as smooth as possible,” she said.

Buechler was hired by the Rowan-Salisbury School System as a temporary program director for their LINKS program. That was when she stumbled across the grant that would allow her to start “FILM @ 6.” After speaking with the school system, Buechler says they decided to merge LINKS with other projects to form FILM @ 6. The program has taken off in its second year, and is now partnered with four middle schools: Corriher-Lipe Middle, North Rowan Middle, Southeast Middle, and China Grove Middle.

“We’re really targeting students who may be struggling with that transition either socially or academically,” Buechler said.

Wednesday “FILM @ 6” visited Livingstone’s Campus and participated in short classes in the Culinary Arts Department. Director of Hospitality Management and Culinary Arts Vivian Ray wielded a knife and gave students a lesson in food presentation by letting them make small fruit baskets out of oranges. At other stations the students made smoothies, fresh turkey wraps or cradled paper cups filled with soil and a cantaloupe seed after listening to farmer Joe Fowler talk about growing food.

But “FILM @ 6” offers a lot more than a summer camp. It includes after-school tutoring sessions, STEM labs and field trips throughout the year. Each school partnered with “FILM @ 6” has tutors who keep in touch with the sixth-grade teachers to make sure the students are completing their homework and understand project expectations. And though the program is STEM-focused, students can receive help in other subjects, such as language arts.

Each school will also have a site director, someone the kids can call upon for help but who can also make sure the parents are kept up-to-date on their child’s schooling. Buechler says this is especially important because parents are generally highly involved in their child’s elementary school life, but when a student enters middle school the parents may feel unwelcome or unwanted.

Even though the school year hasn’t started, the site directors are hard at work getting to know students. As the group toured Livingstone’s campus, students would pull aside their site director and ask for advice or help mediating small problems.

Eighth-grade math teacher Ashley Miller served as a tutor with “FILM @ 6” last school year at China Grove Middle. She said she thought it would be a good opportunity to get to know students before they showed up in her classroom and would help her connect with her daughter, who was also in sixth grade. She said that the students seemed to find it helpful to have at least one adult in the school that they already knew and could come to if they needed advice. Miller added that none of the tutors were counselors, but that didn’t mean they couldn’t help.

“Middle school drama, we can handle,” she said.

She says “FILM @ 6” is great for getting the kids up to speed academically and socially, but also believes that one reason the after-school portion is so crucial is because it gives students time in the computer lab.

“A lot of them just needed access to the technology,” she said.

Site Director for Southeast Middle Henry Diggs says that he believes the power of the program lies in its focus on helping the students develop into mature young adults. The kids learn how to have respect for themselves and others, and are encouraged to think about how they’ve changed since their first day with “FILM @ 6.”

“This is powerful,” Diggs said.

Diggs says there is a wealth of positive feedback for “FILM @ 6” — if there have been any complaints, he hasn’t heard them.

As for the students, they love it.

Cheyenne Reeder learned about “FILM @ 6” during a tour of China Grove Middle School and knew she had to sign up for it.

“I thought it would be a lot of fun,” she said.

Initially, she said her biggest fear about starting middle school was that she’d be late for class because she’d gotten lost or couldn’t spin the dial of a combination lock so it opened on the first try. But now, she thinks she’s got that down pat.

“I’ve been feeling confident,” she said.

Mason Hollar of Southeast Middle says he owes his academic aspirations to his fifth-grade teacher at Knollwood Elementary, Mrs. Borgquis. Without her, he says, he never would have signed up for “FILM @ 6.” So far, Hollar says, the program has really helped him get used to the routine he’ll need for the next school year. Now, he’s not nervous about starting school.

“I feel like I’ve just been there,” he said.

Some kids, like Saybrin Thomas, were just looking for a good after-school program while their parents worked. Because “FILM @ 6” is grant-funded, it’s completely free for the students, and for Thomas, it was the perfect fit.

This is the first year that “FILM @ 6” has hosted a summer camp, but it had the after-school program during the 2013-2014 school year. Many of the sixth-graders who were part of the program last year are returning as mentors.

“I probably helped them more than I did myself,” she said.

Her co-student mentor, Nicholas, agrees. He says helping the other kids is fulfilling and it gives him confidence. Miller and Smith say that the program isn’t what a lot of kids may expect — it’s not just for getting homework help.

“You learn a lot of really fun stuff,” he said.

Instead, the program is a surprising amount of fun. The kids have time to work on their homework and then participate in labs and other activities, such as programing a robot or constructing a moveable wooden arm.

Christy Lockhart is a social worker with the school system and is filling in as a site director for the summer. She’s loved seeing how the students have matured over the course of the program, and grown cohesive as a group.

“They’ve had such a blast,” she said, “Don’t even know they’re learning.”

Over the summer each group has been in charge of making a film called “A Day in the Life of a Sixth-grader.” Copies of the films will be sent out to the schools’ feeder elementary schools so that, even if they don’t sign up for “FILM @ 6,” kids can still get an idea of what to expect their first day of sixth grade.

Heading into Florida, the final state of biking trip

It was easy to put the experience of yesterday behind me. The heat, headwind, and flat tire made the day... read more