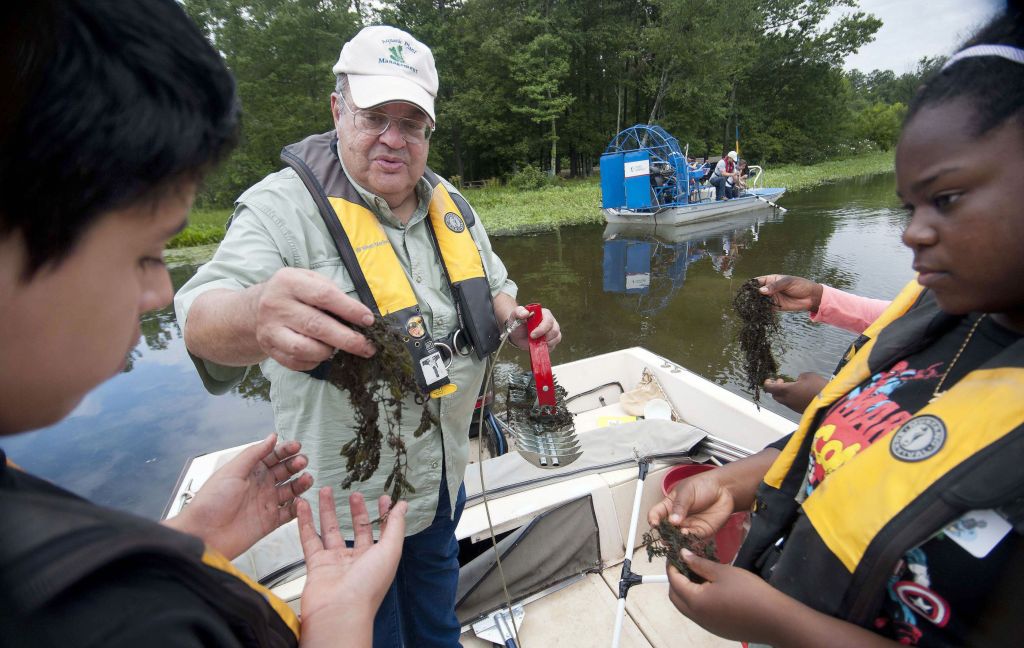 The Rowan-Salisbury Schools’ white activity bus fit nicely into an empty parking spot at the Flat Creek boat access on the Rowan County side of the Tuckertown Reservoir. The bus seemed out of place flanked by various makes and models of pickups and empty boat trailers. On any given day, the conversations heard around this and similar boat ramps would include the words monofilament, soft body plastics, buzz bait and most likely the phrase “pack of nabs.” However, the 13 Novant Health STEM scholars from Knox Middle School that disembarked from the bus last Wednesday were chattering about macro invertebrates, water quality, biological surveys and invasive exotic aquatic plant life.

The young scientists were taking part in the annual STEM (science, technology, engineering and mathematics) summer camp at Horizons Unlimited. The theme of the camp was “Save our Systems” (SOS), which focused the campers on water quality and invasive aquatic plants that cause serious problems for fishermen, recreational boaters, municipal water services and operators of hydroelectric dams. After two days of research on various aquatic plants, the campers arrive at the 2,560-acre petri dish for several hours of field study.

Duke Energy donated the use of two survey boats and what Horizon’s Science specialist Anne Ellis calls “plant and pest boys” who served as field experts for the campers. Each camper was assigned a particular plant to locate and identify.

Prior to arriving at the lake, the freshly recruited limnologists had to engineer and build the tools needed to collect samples of plants and invertebrates. Out of the back of the school bus came implements made from PVC pipe, duct tape and variety of items found lying around back at school. Cups, forks, bamboo skewers, kitchen strainers, netting and even a pair of scissors were all taped to the end of the 6- and 7-foot poles and ready to be field tested.

Tuckertown Reservoir, like many other impoundments, has an abundance of plant life that flourishes in the shallows and along the banks. Plants are broken down into three categories; native, non-native and invasive. Native plants occur naturally in a region, whereas non-native plants have been brought in from a different area, usually a foreign country. Invasive plants are the non-native plants that proliferate in the new location and crowd out the native plants.

The two boats leave the boat ramp and head for a nearby wide finger of the lake that backs up to Flat Creek. Scouring the shoreline, the scientists stop at a lush corner that contains several varieties of plant life. Ronald Garrido, a rising eighth-grader, drops his PVC rake into the water and promptly draws out a clump of Hydrilla. The plant he was searching for was found in a matter of minutes.

Hydrilla is native plant to central Africa and is believed to have been imported into the United States as an aquarium plant. In the 1960’s Hydrilla was discovered growing wild in Florida. According to an article from N.C. State, Hydrilla was later discovered in Wake County in 1980. The growth rate of the plant and its competitiveness with native plants have made Hydrilla the single most serious weed threat to North Carolina inland waters.

In the short term, small amounts of Hydrilla produce favorable effects on sport fishing. Large predator fish like bass seek out the cover that the Hydrilla mats provide. However the same N.C. State article stated that as the Hydrilla mats grow, they prove to be destructive to fishing in the long run by lowering oxygen levels and affecting habitat.

Duke Energy’s aquatic plant manager, Ken Manuel, who was driving one of the boats for the days’s excursion, says it is extremely difficult to eradicate an infestation of Hydrilla but there are some controls that are proving to slow the spread in a body of water. One of the control options for Hydrilla is the introduction of sterile grass carp into the affected water. The carp feeds on the tender grassy shoots of the plants without the risk of overpopulating the habitat with baby carp. The downside to the carp is that they will eat the native grasses along with the invasive vegetations.

Back at the boat ramp, the allotted time for the field labs was quickly evaporating. The students help the instructors pack up the microscopes, tables and iPads. Students are reminded that they must make sure that any samples of the non-native plants can not leave the area in fear of broadening the exposure. It’s all too apparent that gaining complete control over the invasive plants seems evasive.

Possibly one day a future scientist will root out the answer that will turn the tide in favor of the native plants. There’s a good chance that scientist might have been a Knox STEM Scholar.