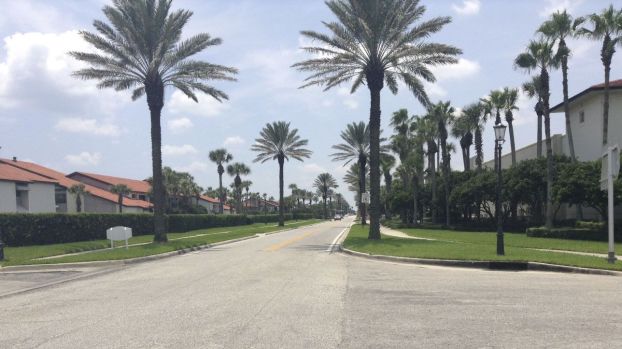 Pedaling through Florida on the hottest day of the trip

The weather experts for the southern Georgia and northern Florida area were calling for serious heat. I left my room in Callahan earlier than people could see me this morning because I needed to only make one turn and I would have a 20-mile straight road with my own bike lane.

I got a photo of my first eastbound sunrise of this trip. Most of the time I have been heading south. My first road was A1A, and the town of Yulee was first. Lots of big stores were along the road, but they quickly went away. I never knew when I was in O’Neill, the next town.

It was easy to tell when I arrived at Amelia Island because of the huge bridge that signaled entrance into the area. The view off the bridge was about all I saw of it though, as we turned south again. Passing through the edge of Fernandina Beach and American-Beach, I was finally able to see the water near the end of Amelia Island.

There was a series of parks called the Talbot State Parks that were impressive. Two things stood out. The state took an old bridge and made it suitable for walking, running, biking and, best of all, fishing. Hundreds of people were using it. The other thing was a huge gathering of pelicans off in the distance. I got a picture of the pelicans, but they were far away, hundreds of them.

Next was a quick ride to the Mayport Ferry. Mayport has a Naval Base and is one of the oldest towns in America. This ferry ride cost a dollar, but they almost forgot to collect it. A huge ship passed by just as we were getting ready to pull into the channel, and I guess they forgot me. I found the person and paid.

By this time, it was getting warm. The map called for me to ride through Atlantic, Neptune, Jacksonville, and Ponte Vedra Beach. That sounds exciting, but I saw very little of the water. Ponte Vedra Beach is seven miles of huge mansions behind their own gates. I have never seen anything like it. Most if the cars appeared to be inside, and the gates locked. To their credit, lots of people were out riding their bikes. By this time, the temperature was over 90.

My water was running low, and I just had a few sips left. I rode and rode, part of it past a wildlife refuge. With no stores in sight, I stopped at a house with evidence of construction going on, but had to fill up my bottles on some sorry tasting water. Still, it did the job.

On down the beach, I passed through Vilano Beach and headed into St. Augustine. I knew it was hot, hotter than any other day so far. Once I found a room at the Cozy Inn, I resolved to get my rehydrating food and get out of the heat. The local TV said the temperature was 96, with a 110 heat index. I have been joyously rehydrating since visiting another Winn Dixie. It is hard to explain how a long day like this affects me, but I eat and drink almost nonstop until I go to bed. I have watermelon and other fruit, and several drinks. It is important because tomorrow will be just as hot.

I am settled in St. Augustine after 85 miles today. Remaining for the ride are 515 miles. I can be very accurate now because I am on the last map. Tomorrow, I will start differently than normal by doing some sightseeing here in St. Augustine and then head toward Ormond Beach. The distance will be shorter than normal, but that is fine. The last few days have been longer than normal. I hope to have some good pictures for everyone tomorrow.

Hornets up 28-14 at halftime of state championship game