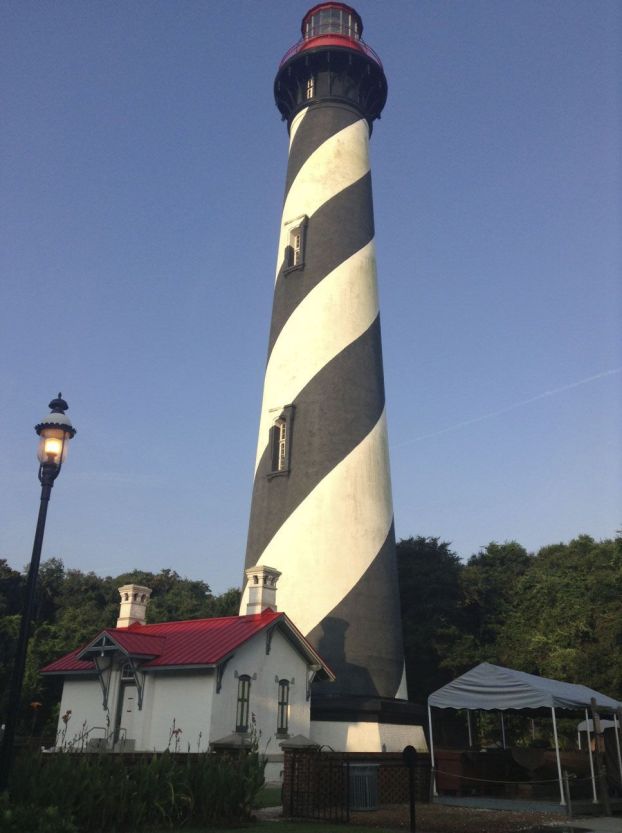 A short mileage day with time for sightseeing

I was up and out this morning after an exceptional night’s sleep at the Cozy Inn in St. Augustine. My plan was to ride around and try to see some of the sights before heading away from town. Years ago, I had spent some time there while on one of my many honeymoons, and the place has sure changed some. There is a lot more commercialization but according to resident Steve Buell, some good places stand out as far as being real. Steve suggested the fort, the 600-year-old tree, the Alligator Farm and a few others. I didn’t get to tour the Alligator Farm, but will add that to my next visit. I did spend some time at the others and found the huge lighthouse just off A1A. I got close enough to make a few good photos even though it was supposed to be part of a tour. Fort Castillo de San Marcos is always very impressive as it guards the bay. I hated to say goodbye, but maybe I can make a stop on my book tour there.
A few miles out of town, I saw signs for Fort Matanzas, another Spanish fort. I took time to do the boat ride and tour of the 1740 fort. A crew of 6-7 men usually were at the fort ready to turn away enemy warships. The National Park Service does a good job with this. They allow climbing up to the top of the fort and spending time in the crew quarters.
Back on the bike, I rolled through beaches like Butler, Crescent, Summer Haven and then past Marineland. Most of this part of the ride was limited to seeing the beach houses and dunes. A series of other beaches put A1A right on the beach though as I passed through Painters Hill, Beverly and Flagler Beach. This was some of the best and most interesting riding in the last two weeks.
Next was Ormond by the Sea, and finally Ormond Beach, my home for the night. I am spending the night with Mike Strauss, a Jet Blue pilot who is best friends with Mike Wright of Rockwell. I have known Mike Wright for many years due to our YMCA activities and he told Mike Strauss about my trip, with the end result being a great place to stay. I met some new friends tonight and rode a new fangled bike called the “golden cruiser.” It isn’t likely to replace my Surly Long Haul Trucker for the rest of trip.
I’m in Ormond Beach, with 52 miles for the day. Tomorrow, I will head to somewhere around Titusville or maybe even Cocoa Beach, possibly with some more sidetrips for sightseeing. I can’t wait to find out what happens tomorrow.
Rowan County resident David Freeze is cycling from Bar Harbor, Maine, to Key West, Fla. Contact him at david.freeze@ctc.net.