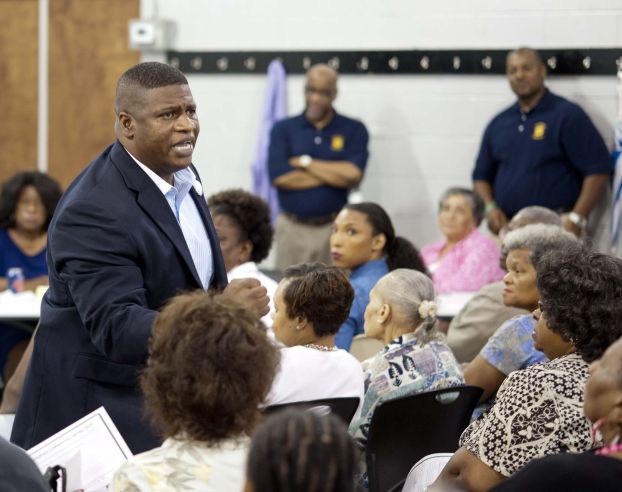 Elizabeth Cook: ‘Somebody’s got to reach out and help’

As Clee Atkinson said here Wednesday night, “You don’t have to be great to get started but, Salisbury community, you have to get started to be great.”
Atkinson is a state trooper from Rocky Mount. But he was preaching at that meeting at Miller Recreation Center last week, preaching hard. He warned about the forces that push at-risk youth toward gangs and violence.
All children are at risk. Our entire city is affected when bullets fly and young people fall.
Those bullets are symptoms of deeper problems, like poverty, addiction, lack of community and education. What’s missing can be summed up in one word — hope.
The messages shared at Wednesday’s meeting need to be repeated in every corner of Salisbury. The overflow crowd of some 200 people that night was diverse — mostly black, with a good number of whites. But we need to forget about color when we talk about being a safe city. We’re all part of the same tapestry. Remove one thread, any thread, and the fabric weakens.
Atkinson said he’s not afraid of gangs. They’re just groups. But he is afraid of another G-word — God — so he’s carrying a message of warning and awareness to anyone who will listen.
We need to nurture young people so they won’t have to turn to gangs for support, structure and a feeling of belonging, he said.
If you have cellphones, iPads or computers in the house, he said, “gangs are in your house.”
Children have access to everything, and it’s wrong to think your children are immune to trouble.
“They play us like a drum.”
Only a few hands went up when Atkinson asked who in the room was under the age of 25. It was one of those glaring, telling moments. These were the grandparents and neighbors of today’s at-risk youth, not their parents nor the youths themselves. Atkinson said that reflected the problem. Not only were young people not represented, he said, but in many cases children are left at home unsupervised — and then we wonder what the problem is.
“We’ve got to be all hands in.”
He addressed pastors in the room, telling them they needed to be aware of what was going on outside the church. Churches need to get involved, he said, and make tough decisions — like offering free programs for youth.
And he pushed education and parental discipline. Young people want rules, guidelines. If they don’t have rules at home, they will find structure in gangs. They will get in some kind of trouble.
Then the job of discipline falls to law enforcement.
“All we do is chase, chase, chase. We’re supposed to be Superman. …
“You guys are responsible. We can only do so much with a gun and a badge. … Take your house back.”
And to neighbors who see things that are wrong, he said, “You ain’t dead yet. Say something … Correct these people.”
They say discipline starts in the home, but what if a child goes home to a room full of marijuana smoke, with a mama cussing everything he does? Growing up in that environment can make a child angry at the world. Teachers can’t teach children full of that kind of anger, Atkinson said.
“Somebody’s got to reach out and help somebody.”
Salisbury has several programs to help youth, but today’s problems seem to call for something more. Some ideas about what that might be could come from the surveys handed out Wednesday night. Great credit goes to the West End Community Organization, West End Pride and The Chamber (not to be confused with the Chamber of Commerce) for organizing the session. They will schedule another meeting soon to share results of the surveys.

A follow-up to last week’s column about the exit of City Manager Doug Paris:
In being brief, I did not convey the full complexity of talks to improve the Post’s access to city employees. Specifically, Mayor Pro Tem Maggie Blackwell pressed hard during a meeting at the Post and got Paris to agree that reporters could contact city department heads — something he denied ever restricting in the first place. Blackwell felt that was a compromise solution and showed progress. She followed up several times with reporter Emily Ford and others, and we reported no further complaints about access.
Elizabeth Cook is editor of the Salisbury Post.

Dream come true for Rowan Little League Softball The parents of the 13 young ladies who have won the title... read more