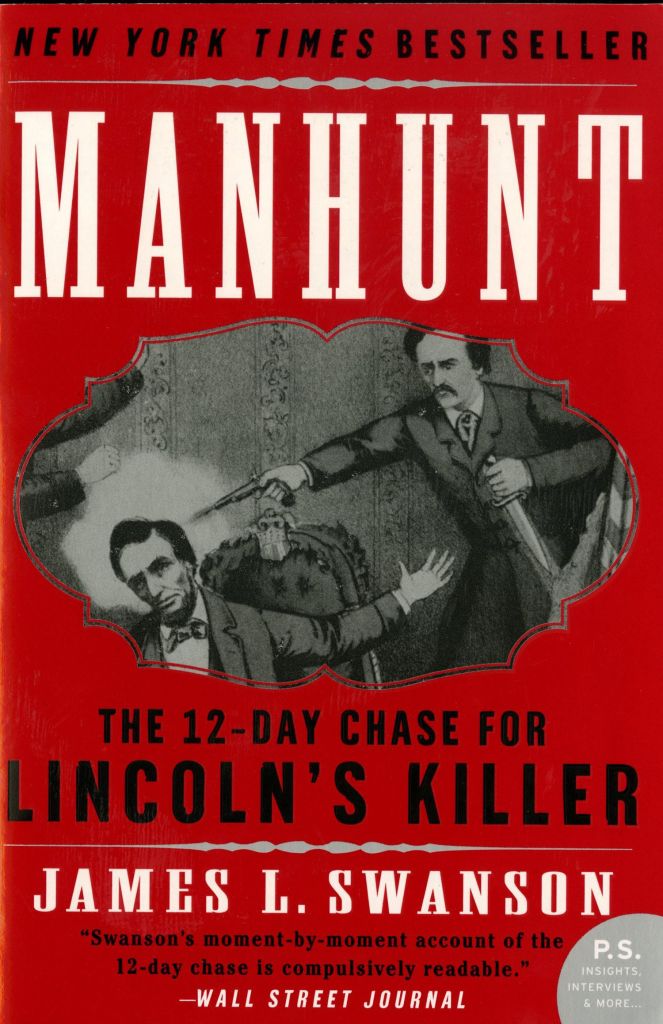 How do you like your thrillers?
Complex, lots of misleading clues, mistakes and ultimate revenge?
You’ve got it all in “Manhunt: The 12-day Chase for Lincoln’s Killer.” Steve Cobb, a teacher and history buff, will lead the discussion of the second book in the 2014 Summer Reading Challenge on Tuesday, July 29, at 7 p.m. at the Norvell Theater on Fisher Street.
You can come even if you didn’t make it through the 400-plus-page book. The topic is fascinating and the book full of things you never heard in history class.
Did you even know about the 12-day chase? These are the days when communication relied on men on horseback. The telegraph existed, and those lines stayed hot. But in the swamps of Maryland or the wilds of Virginia, telegraph lines were not that common. Plus, many in Virginia were still fighting the Civil War, despite Robert E. Lee’s surrender.
In John Wilkes Booth’s mind, the war was definitely not over, and he blamed the ruin of the South on Lincoln and his cabinet. Booth, just 25 when he assassinated the president, has a small but loyal band of followers, all probably less intelligent than he. One conspirator, Lewis Powell, is to assassinate Secretary of State William Seward, and makes a bloody job of it, badly injuring him, his two sons and others. George Atzerodt was to assassinate Vice President Andrew Johnson, but changes his mind at the last minute. David Herold, loyal to Booth up to the end, is part of the escape plan.
Author James L. Swanson’s account of the incredibly daring and hastily planned assassination is edge-of-the-seat reading, even though we know how it ends.
Booth seeks glory from his deed and treats it as a performance for which he expects a standing ovation. He must get out of Washington, D.C., and deep into Virginia, where he’s counting on diehard Confederates to praise and protect him.
He didn’t count on his co-conspirators bungling their jobs and leaving trails that practically glow in the dark. And he didn’t count on the tenacity of Secretary of War Edwin Stanton. Somehow, Booth managed to remain free for 12 very long days, despite a broken leg and inexplicable delays in action.
Reading it now, incredible is the word that comes to mind again and again as Booth eludes the Army and Navy and who knows how many detectives and nosy citizens wanting to bag the growing reward.
After Booth convinces a soldier to let him cross the bridge from Washington, D.C., to Maryland after hours, David Herold asks the same soldier for passage and moves across, as well. The soldier has enough when the man who owned Herold’s horse comes chasing after him, completely unaware that Booth had just murdered the president. Booth is off on the dark roads of Maryland working towards his first stop — Mary Surratt’s tavern, where he has more weapons. Herold catches up with him on the road, but there’s so sign of Powell, who is lost in Washington after attacking Seward. Atzerrodt just hangs around, talking too much.
Herold would do anything to help Booth and he will be called on more than any faithful friend can bear. Their stop at Dr. Samuel Mudd’s house is a chance for Booth to get help with his painful broken leg. Booth, exhausted and in pain, convinces Herold they must stay the night. So begin the delays that eventually lead to Booth’s capture. Incredibly, Mudd has a chance to reveal Booth’s location to the manhunters, but does not. He gives the pair the name of a Confederate who might help them. Capt. Samuel Cox advises Booth and Herold that it is wiser to hide than pursue their goal of getting a boat to cross into Virginia. Cox elicits the help of a Confederate spy, Thomas Jones, who plays so close to the vest that Booth and Herold spend five days in a heavy pine thicket not far from the river, sleeping on the ground and not eating much, until Jones finds a dark enough night to launch a skiff into the Potomac. Booth has been demanding as many newspapers as Jones can find so he can read about his exploits. Booth is surprised that he is not hailed as a hero.
Is it possible to say incredible too many times in this tale? Incredibly, Herold rows in the wrong direction, and they end up back in Maryland. Three days later, they make it back to Virginia, where the only thing they will find is more and more trouble and rejection.
Herold makes the penultimate mistake in asking three Confederate soldiers to help. The fugitives find succor with the Garret family, whose unsuspecting father has no idea he is helping John Wilkes Booth or that the stranger is an assassin.
When one of the soldiers rats on Booth and Herold, it doesn’t take long for the 16th New York Cavalry to find them, but then, incredibly, inexplicably, they do not move on Booth and Herold, who are locked in a barn. No one in the group takes charge, instead talking back and forth with Booth. Knowing he is armed, the 26 men are reluctant to simply charge the barn and take him.
Instead, a fearless, and some say, slightly crazy young sergeant, Boston Corbett, peers through the 4-inch gaps between the barn boards and shoots Booth through the neck as he approaches the door.
Booth lives for another three hours, paralyzed, trying to make a final speech; his last words, “Useless, useless.”
If you can’t finish the book, make use of Swanson’s epilogue, a timeline, a conversation with the author and assorted photographs at the end. If you can’t get enough of the story, check out his bibliography.
But whatever you do, come to discuss this incredible true account of 12 of history’s darkest days.