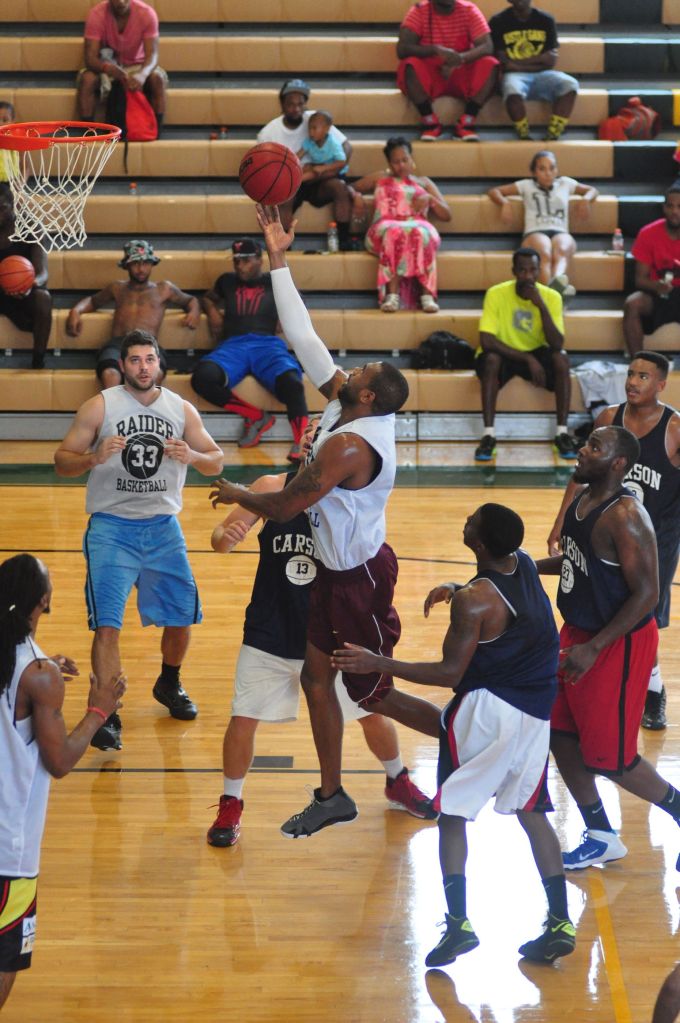 SPENCER — Run It Down Alumni Basketball Tournament director Stephen Heggins turned out to be a less than generous host.
Heggins scored 24 points as South Rowan beat Davie County 83-71 in Saturday night’s final at the North Rowan gym and won a throwback tournament for the first time.
The hard-driving Heggins scored almost as many points in an hour against Davie as he scored in his high school career. He managed 28 points at South in the 20 games he played during the 1996-97 season. Heggins’ biggest claims to fame in high school were being the brother of Raider stars Levar and Janetta Heggins and placing fifth in the high jump in the 4A state track meet.
Of course, Heggins stood 5-foot-9 and weighed 135 pounds as a South senior.
He didn’t sprout to 6-3 until well after graduation. He had a late-blooming college basketball career at Brevard from 2003-05 and now owns the Wash Me Detail Shop on North Main Street in China Grove.
He’ll have a pretty nice tournament trophy to put in his office.
“Winning this tournament meant a lot to me because I love playing basketball and it meant a lot to everyone on our team,” Heggins said. “We had Carlos Dixon, so we knew we could win. Carlos told us to give him the ball and we did that, but we also were going to play our hardest for him.”
South got 17 points from 32-year-old pro veteran Dixon and 16 from youngs guard Johnathan Gaddy, but it was the offensive outburst from Heggins that neutralized Davie jumping jack Shannon Dillard, Dillard poured in 28, including 18 in the stretch run.
“I don’t know what Dillard’s vertical jump is,” Heggins said with a laugh. “Forty inches? Maybe 50 inches? I just know we couldn’t stop him. When he got the ball, we just had to hope he missed.”
“He just elevates so high,” Dixon added. “Nothing you can do.”
South appeared to be in trouble early and was down 25-15 when Heggins hit the shots that triggered a comeback. Then Dixon started slowing things down and setting teammates up. Dixon passed to a cutting Josh Chapman for a layup, and twice he found Chris Charles for open 3s. Suddenly it was a tight game.
A 3-pointer by Dixon got South even at 35-all, and two free throws by Gaddy gave South the halftime lead.
When Heggins opened the second half with a driving bucket and a free throw, South had a 40-35 lead. Then Gaddy knocked down two 3s off nice passes by Tony Propst and Heggins, and South was in firm control.
South’s lead peaked at 64-50 when Dixon struck for three more from very long range with eight minutes left, but Dillard and Michael Key (19 points) kept coming.
South’s lead was down to 71-65 with 1:38 remaining when Dixon called for the ball, took the inbounds pass, dribbled the ball down, and then squeezed his 6-7 frame into the lane for a backbreaking three-point play.
“Davie was very good, and we really needed to get a good shot on that possession,” Dixon said. “My teammates trusted me to get that shot.”
Added Heggins, “Carlos can score, anytime, anywhere. He’s just such an educated basketball player. We spread the floor, and they didn’t have an answer for him.”
Gaddy air-balled a late free throw, but he came back from that embarrassing moment to knock down four free ones in a row, and South owned a championship.
This was the fourth alumni tournament staged in the past five years. Scooter Sherrill put on the first three at Carson. Dixon, who will be returning to Japan for another pro season, always shows up.
“I think Carlos is the best that ever played at South,” Propst said. “And he’s one of the best the county’s ever had.”