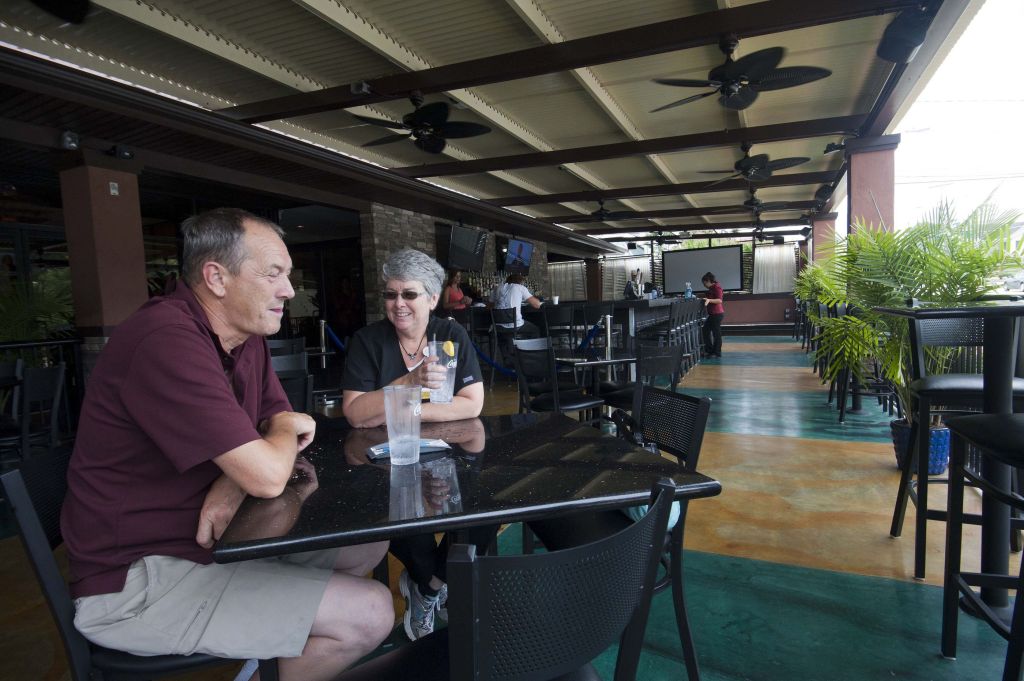 SALISBURY — If you haven’t been to DJ’s lately, you may not recognize the place.
Once a Burger King, the restaurant at 1502 W. Innes St. has transformed yet again with a new 2,500-square-foot outdoor dining room and bar and transforms into a nightclub with the touch of button.
Make that eight buttons.
The ceiling has eight louvered sections, which operate independently. When open at night, the ceiling reveals the heavens, giving the new nightclub its name, Sky Lounge.
“You don’t feel like you’re in Salisbury, North Carolina, that’s for sure,” owner Louie Mourouzidis said. “You feel like you’re in a place that would be on a Greek island or in Miami.”
Mourouzidis, who was born in Greece, said he modeled the design and decor for Sky Lounge on European outdoor restaurants and lounges.
Saying only that his investment was “substantial,” Mourouzidis has created a unique dining and nightlife experience with an open but protected environment, sleek black furniture, bar that seats 22, green and gold concrete floor and lots of ceiling fans. With 19 tables, Sky Lounge can accommodate 120 diners, bringing DJ’s seating capacity to 320 in nearly 8,000 total square feet.
Billowing curtains and lush plants soften the mostly black interior of the Sky Lounge. At night, colorful lights illuminate the walls and bar. Three sectional sofas and tables are on order to grace the raised platforms when they are not in use by bands and comics.
Even when a heavy rainstorm moved through recently, lunch customers in the Sky Lounge did not get wet.
The entertainment line-up features some pretty well-known artists, including Jamie Lynn Spears, sister of Britney, and the band Bear With Me, which recently opened for chart-topper Paramore. They’re both set to perform this fall, as well as Unknown Hinson and Brothers Osborne, which was named to the Rolling Stone Country’s 10 New Artists You Need to Know list this summer.
Fastball, an Austin, Tex. rock band that had several hits in the 1990s, opened the Sky Lounge on June 28.
Starting in August, the Sky Lounge will alternate stand-up comedy and jazz on Thursdays or Fridays, with bands on Saturdays, and offer a condensed menu until 2 a.m. on Friday and Saturday.
The new addition has no air conditioning, but fans and a breeze kept diners comfortable on a recent Thursday at noon. In the winter, manager Lisa Brown said her staff will use tall heaters and window coverings to maintain a temperature in the 60s.
“I think we will be able to use it almost year-round,” Brown said.
In addition to Sky Lounge, Mourouzidis has nearly finished a complete renovation of the inside of DJ’s as well, with new furniture, flooring and decor. He took out part of a wall that separated two dining rooms, opening up the interior and making it feel more spacious.
Mourouzidis, who has 45 full-time and part-time employees, opened DJ’s in 1995. Although he has owned and operated a variety of restaurants and nightclubs since then, including the former Ethos and Club Zidis downtown Salisbury and businesses in High Point and Concord, Mourouzidis said he now only has the Salisbury DJ’s location, which is taking all of his time and attention.
Would he consider another restaurant or nightclub venture? Not anytime soon.
“No more,” he said. “This is it.”