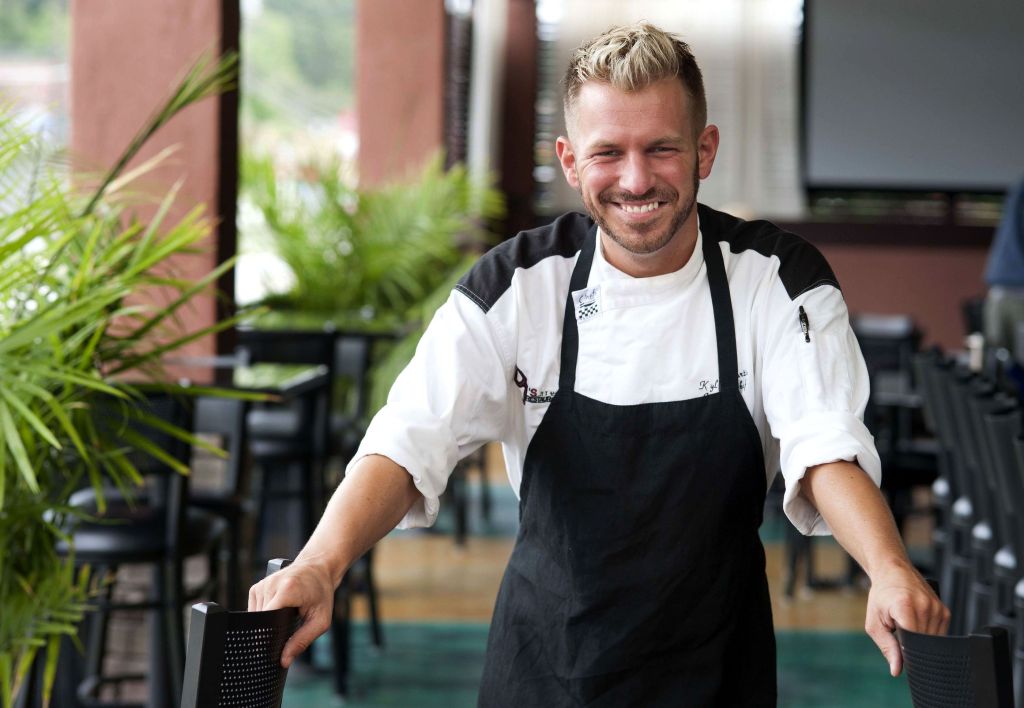 SALISBURY — Does DJ’s have a rising star in the kitchen?
Kyle Curtis, the restaurant’s new executive chef, will compete on the Food Network show “Cutthroat Kitchen.”
Curtis, who serves both DJ’s and the restaurant’s new Sky Lounge outdoor dining room and nightclub, will be in Los Angeles for three days this week, filming an upcoming episode of the show that features four chefs who try to outcook and outsmart each other. Curtis and DJ’s owner Louie Mourouzidis are scheduled to depart today.
Originally from Greensboro, Curtis graduated from the University of North Carolina at Greensboro hospitality program and completed a three-year apprenticeship with the Greensboro Country Club. He came to Salisbury to serve as chef at Ethos, another restaurant and nightclub Mourouzidis owned in downtown Salisbury that closed last year.
Curtis will be one of four contestants on a single, hour-long episode of “Cutthroat Kitchen,” which features chefs sabotaging each other by doing things like taping a potato masher to an opponent’s arm or forcing a chef to make margaritas using a blender powered by a stationary bicycle.
Curtis said he no idea what kind of challenge he will face when the cameras start to roll. Everything is kept very hush-hush so no one has an advantage, he said.
While some cooking shows allow the victor to continue competing, Curtis said he and his competitors will be done after one episode. And that’s the way he wants it.
“I’m not looking to become some kind of celebrity chef,” he said. “I just thought this would be fun and get me out of my comfort zone.”
Curtis’ previous experience as a stand-up comic in Greensboro may help with some quick comebacks and banter with the show’s host and judges.
He applied and auditioned, got called back and did a Skype interview with the show’s producers.
When he hasn’t been busy preparing to go to Hollywood, Curtis has been re-inventing the menu at DJ’s.
“We wanted to keep the staples and what has kept people coming here for 20 years,” he said. “But we’ve added some specialty dishes that have a Southern feel with a new spin.”
New items include the Innes Street sirloin, a 10-ounce grilled filet topped with a wild mushroom and cognac demi-glace, served on top of creamy mashed potatoes and freshly grilled asparagus for $19. Vegetarians and those avoiding gluten can order the stuffed eggplant augusta — sliced eggplant wrapped around sweet corn, red rice, manchego cheese and peppadew filling and topped with a smoked tomato burre blanc served over a roasted corn and chickpea salsa for $15.
Curtis even added alligator to the menu. The cast-iron blackened, marinated ’gator is served over manchego grits for $18.