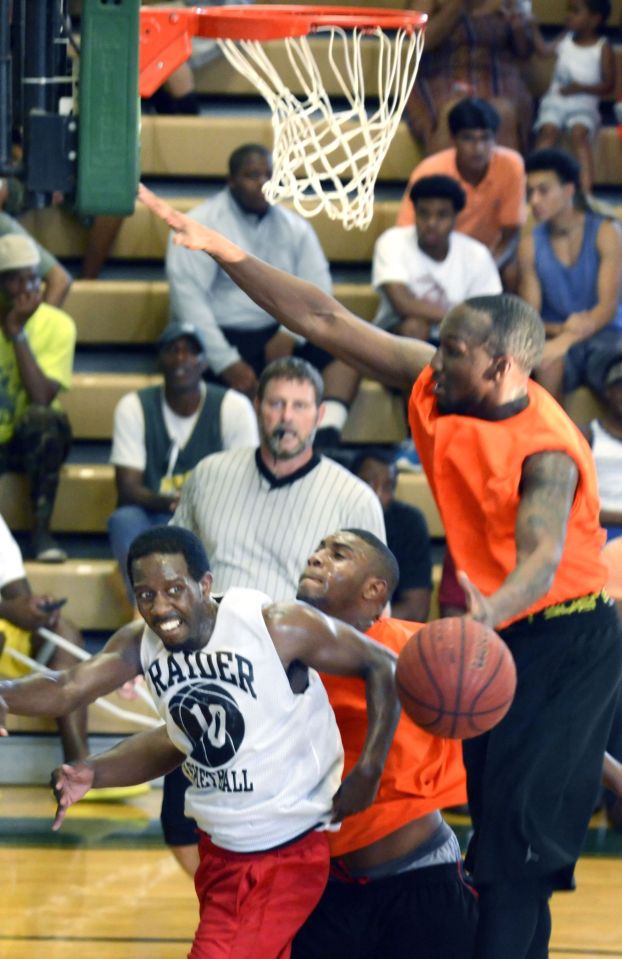 SPENCER — Tony Propst, 35, was a key figure the last time South Rowan won the Sam Moir Christmas Classic.
That was in 1995, believe it or not, but maybe he’s going to be part of another South tournament title.
Propst contributed more than his share as South steamrolled Lexington 83-62 in the North Rowan gym in the first round of the Run It Down Alumni Tournament on Friday.
Mostly Propst contributed some timely 3-pointers.
“When you get older, 3-pointers are all you can do,” Propst said with a laugh. “I don’t take it to the rim much these days.”
Early 3-pointers by Propst, tournament organizer Stephen Heggins and superstar Carlos Dixon pushed South to a 13-4 lead, and the Raiders were never seriously challenged by a short-handed Lexington team that was only able to muster five able bodies. Lexington was as athletic as it gets, but the orange-clad Yellow Jackets made as many windmill dunks as they did jumpshots.
“They only had five guys and we had nine,” said Propst, who also was an outstanding QB for South’s football team. “That made the gameplan we talked about pretty simple. Run ‘em and pressure ‘em and get em in foul trouble. We knew tha once they were in foul trouble, they had to play lazy defense.”
Dixon, 32, is a staple of Rowan alumni tournaments, but the former Virginia Tech standout is still a force. He will leave in the fall for his fifth pro season in Japan. The 6-foot-7 forward likes Japan, and the Japanese fans obviously appreciate his very well-rounded game.
“It’s pretty easy to play with Carlos,” Propst said. “Every time Lexington thought about making a run, Carlos would hit a 3.”
Dixon rained six 3-pointers in all, dominated the boards along with Marcus Rucker and poured in 34 points.
The secret weapon for South was Rucker. Rucker’s career at South was brief – nine games in 2001 — but he averaged 14.2 points in those games and was about as athletic as anyone the Raiders ever have suited up. He capped Friday’s romp with ae emphatic reverse jam off a casual, no-look feed from Dixon.
“Rucker’s getting older too,” Propst said with a a laugh. “But he’s still got young legs.”
South also got contributions from Johnathan Gaddy, Carl Brown, Levar Heggins, Chris Charles and Josh Chapman.
South led 40-29 at halftime, and there wasn’t much doubt where this one was headed.
“They only had five players and it was really hot in that gym,” Dixon said. “We just ran up and down, and a lot of our guys shot the ball well.”
Eighty-two points in two 20-minute halves — with a running clock — is a lot of points.
South will try to keep it going today against rival Carson in a semifinal that is expected to start around 2 p.m. in the North gym.
“It’s going to be a fun game,” said Propst, who has three daughters, ranging from 1 to 17. “Reminiscing and playing ball with these guys is always fun.”