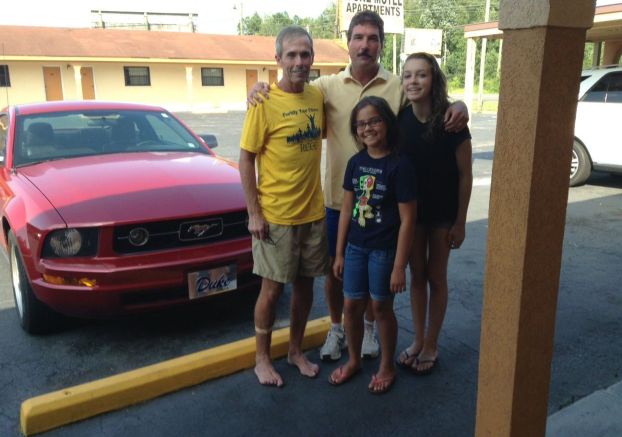 Heat, nail in back tire make for a tougher day in Georgia

Once again, late last night there seemed to be a good plan for today. Then this morning, I decided to take another route that made more sense. The next few days were supposed to be hot with a real chance of storms. By the first route, there was no option for a motel at the right time. There was a good choice after 40 miles and another after 120.
It seemed to make sense to go to Jesup, Ga., from Statesboro and be all set to enter Florida on Saturday. Plus, I could get off the road before the hottest part of the day and maybe miss the storms. I want to go to Callahan by late tomorrow, my first town in Florida, and then will head for St. Augustine.
I didn’t have to worry much about the route once I was on it. Highways 25 and 301 took me south for 58 miles, much of it on very good roads but almost always with manageable rumble strips. Surprisingly, I had hills of the moderate variety. I knew they would eventually leave as I headed south, but it took about 45 miles for that to happen.
Claxton, Ga., was one of two memorable towns. Yes, they do have a fruitcake factory and people really work there and they ship new cakes. For some reason, I thought that they just passed around already made cakes. It was a nice little town, and not hot yet.
On to Glennville and my second stop at McDonalds for ice and this time ice cream. Logging and wood chip trucks were still around, but traffic remained moderate.
I got to Ludowici, where several busy highways came together. They had at least three busy convenience stores, this after not seeing a store for 20 miles. I was pretty dry and hot by this time, with just over 60 miles complete for the day. I got a Reese’s Cup too, and it turned out that I needed it.
It seemed like I was on an interstate highway after I made the last turn toward Jesup, Ga., my planned home for the night. About four miles into the last 11, I heard something beating on the back fender. I stopped and saw that a nail was in my rear tire and the air was leaking out. Nothing to do but change it. Rear tires are much harder to change, and of course I have to unload everything to make it easier and to get to my tools.
It was hot and getting hotter, and I was on concrete. I was missing an important tool, but somehow got a new tube in and the tire mounted. My pump is only for emergencies, and the missing tool really is a fitting that allows the use of a CO2 cartridge to fill the tire easily. I rode away, taking it slow to be easy on the not quite filled tire.
That is when my angels started their work. I knew that my friend and neighbor, Kenny Roberts, was in the area with his family. We had been trying to get together for ice cream, but it hadn’t worked out. I called Kenny, but had to leave a message. I stopped at the first place that looked like it might be able to help and talked to Mr. Walker of Walker Automotive & ATV Repair. He told me that the nearest bike shop was at St. Simon’s Island. Just then, Kenny called back and he just happened to be just ready to leave the beaches at St. Simon’s with his family. He gladly stopped and got two of the fittings for me and brought them to my motel, about 45 minutes away. Kenny, his wife, Sharron, daughter, Lisa, and granddaughter, Nolie, all came by and we talked awhile. It will be my pleasure to treat them to ice cream when we all get home.
So tonight, after 70 miles and settled down in Jesup, I plan to head into Florida tomorrow if all goes well. I just hope the day will be just a little less challenging than today. Looks like the heat is going to hang around in this area, but getting back to the sea breezes will be good.
Rowan County resident David Freeze is cycling from Bar Harbor, Maine, to Key West, Fla. Contact him at david.freeze@ctc.net.

Plenty of rehydrating after 99.5 miles in the sun

While planning for today’s ride, I had several goals in mind. I wanted to make it into Georgia, finish the... read more