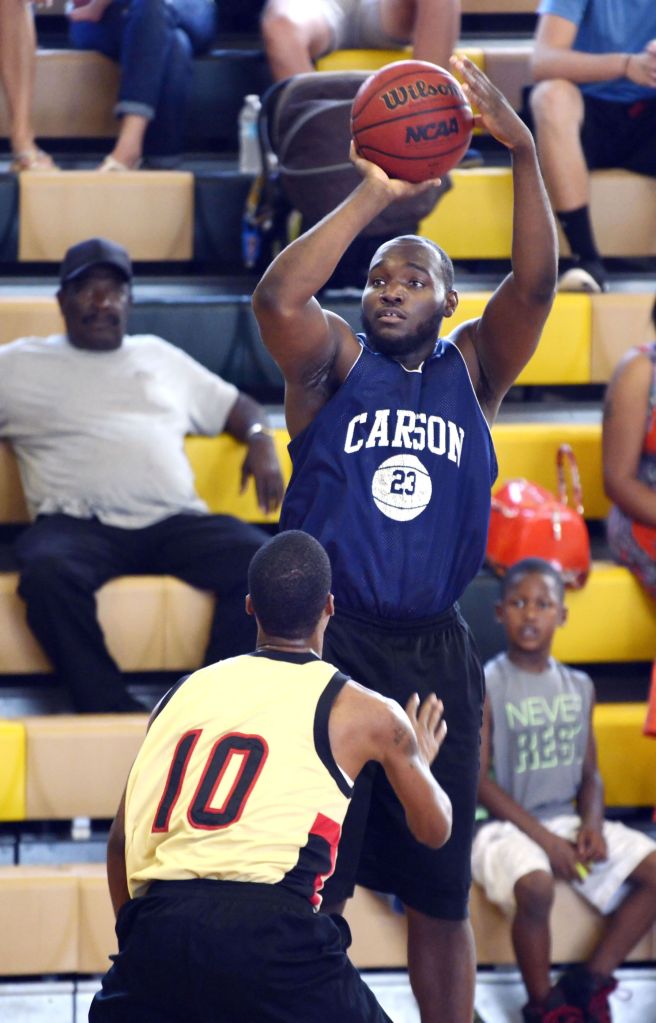 SPENCER — Darius Moose has been a really good college player at Brevard, but Moose knew what might be coming in this weekend’s alumni basketball tournament.
That’s because Moose and his buddy, Catawba shooter Nick Houston,recently got together for some 2-on-2 warmups with their former Carson teammate Cody Clanton.
“Cody beat Nick and me,” Moose said, shaking his head. “Cody is one of those guys who could take 10 years off and still score 50. He’s just so athletic.”
Clanton keyed Carson’s 75-74 opening-round win in the Run It Down Tournament against Salisbury. It was a thriller that wasn’t decided until Salisbury’s Jalen Tucker missed a 30-foot runner at the horn.
It wasn’t just Clanton’s 23 points that propelled Carson, it was him pulling down nearly 20 rebounds and repeatedly setting up Moose, Houston and recent graduate Tre Williams for buckets.
Clanton is just your basic husband and father of two now and he didn’t play college sports, but in the North Rowan gym on Friday, he showed he’s still got most of the wheels that made him Carson’s all-time football record-holder for receptions in a season (65), career receiving yards (2,371) and career TD catches (24). He’s also added considerable strength since high school — not to mention a beard — and he’s much tougher on the boards now than in his prep years.
“I don’t get to play basketball a lot now, but I do play when I can, and it’s always fun to reunite with Moose and Nicj,” Clanton said. “We played together pretty well, and I was impressed with Tre Williams. His game has really matured since the last time I saw him.”
Moose has a guard’s height, but a power forward’s muscle, and the bumped and spun his way to 13 of his 17 points in the second half. He scored 10 in a three-minute burst to open the second half.
“I got the shots I wanted in the first half, but I felt sluggish and I just didn’t make them,” Moose said. “But I got right in the second half.”
Williams also scored 17 for the Cougars, with 12 coming in the second half. Houston scored 11.
Brandon Ferguson, Andrew Hower, Dontae Gilbert and Jarod Raper also contributed to Carson’s winning effort.
Salisbury was hard for the Cougars to shake mostly because of 6-foot-6 Rashawn Joshua, who wore a bunch of different uniforms as a Rowan County high school player. Joshua was tough for Moose to shoot over and he flew in for some rim-shaking dunks on the offensive end.
“That guy was a great ballplayer,” Moose said.
Chinchez Rankin also was big for the Hornets with five 3-pointers, while Tucker added 11 points.
Clanton made what appeared to be a backbreaking, straight-on 3-pointer for a 70-63 lead with 1:43 left, but the Hornets kept scrapping.
When Clanton missed two free throws with 5.2 seconds left — the first thing he did wrong all day — the Hornets had one last gasp, but Tucker’s hurried shot didn’t have much of a chance.
Carson takes on South Rowan in a tournament semifinal at North today at around 2 p.m. South rolled against Lexington 83-62.