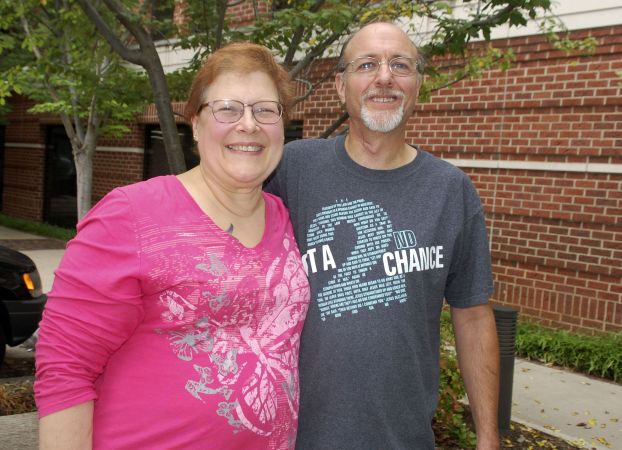 Theresa Brandt refers to the tattoo on her lower right leg as “my reality check.”
The tattoo is a voluptuous, sassy pig, just like her, Brandt says. The pig also has wings. It’s a realistic reminder that no matter how much you want something or how much you work for something, you might only get it when pigs fly.
“Sometimes, you just have to let it go,” she says.
But Brandt is not letting go her goal of raising money for research and taking on the two-day, 39.3-mile Avon Walk for Breast Cancer. She committed herself to the walk last October after serving as a volunteer at the Avon Walk’s finish line in Charlotte.
Her mother, Mary Birnbaum of Salisbury, is now a two-year survivor of breast cancer, and Theresa sees this as a chance for herself to do something heroic.
As first documented by a Post story in early January, Brandt knew she would have to make dramatic lifestyle changes even to think about walking the length of a marathon (26.2 miles) one day and a half marathon (13.1 miles) the next.
She joined a Weight Watchers online program, and started walking, usually with husband Joe, her chief cheerleader. Theresa set a goal of losing 80 pounds by the end of 2014, and so far she is halfway there.
Meanwhile, she has raised about $1,000 toward her required commitment of $1,800 to participate in this year’s late October walk.
Brandt, 57, says she feels better, and her ego has been given a boost with the 40-pound weight loss. “It’s a good feeling to have success,” she says.
When she started, Brandt acknowledges, she was obese. She has adult diabetes and also deals with fibromyalgia.
When Brandt started a walking regimen, she also was coming back from a total left knee replacement in January 2012.
Given these challenges, Brandt hopes that through her complete lifestyle change she can inspire others, put another face on finding a cure for breast cancer and remind people awareness has to start earlier.
As a nurse for almost 40 years, Brandt has been around people rehabilitating from cancer surgery or at the bedside of cancer patients in their last moments.
Almost to a person, the dying cancer patients say they wish they had more time to do something with their families. Brandt says she would love to spare her 24-year-old daughter and 2-year-old granddaughter from ever having to say that.
“This is not something lightweight,” Brandt says of finding a cure. “… How many times in life do we get to do something heroic, or be part of something heroic?”
ggg
Brandt’s road toward October hasn’t been easy, given a couple of major detours along the way.
“Time has been my enemy for my training,” she says.
Earlier this year, Brandt helped as needed with her former husband, who by the end of April had suffered his third stroke. Complications followed, and he died May 10, devastating their daughter.
This summer, Theresa, an experienced actor, and Joe jumped at the chance to perform in the Piedmont Players’ production of “Look Homeward Angel,” a two-week production that opened Thursday night.
Theresa plays the role of Mrs. Clatt; Joe, Mr. Farrell.
The play has eaten into Theresa’s training time, but she figures that at least she’s moving. By day, Brandt works full-time as a pediatric nurse for Triad Adult and Pediatric Medicine in High Point.
As for walking, Theresa and Joe take to the trails of Dan Nicholas Park on weekends. They also like the paths of Hurley Park in Salisbury and the neighborhood streets around it.
It’s especially good because it’s close to the hospital, Theresa says, laughing.
ggg
The Avon Walk is only 12 weeks away. Theresa plans to participate in a six-mile training walk in Charlotte this weekend and others in August and September.
Walk coaches have been calling regularly by telephone and shooting her emails. Brandt says she can’t wait to meet them in person.
She also has joined a team of walkers for the Avon event — the Avon Solo Strutters.
Six miles is the longest distance Theresa has tackled at one time, so she has some serious training ahead of her. “I’ll definitely have to pick up the pace,” she says.
Making the final push in fundraising also is a concern. When possible, she has sold crocheted coffee cozies, bracelets and pins to go with her mother’s delicious baked goods.
Contributions can be given to Brandt or made directly to the web page set up for her at avonwalk.org/goto/brandtjourney. A minimum donation of $5 is required, but Brandt says that’s the price of a good coffee at Starbucks, a Happy Meal at McDonald’s or a pack of cigarettes.
A bowling fundraiser at Woodleaf Lanes also is planned from 6:30-9;30 p.m. Aug. 8.
At home, Joe does most of the cooking, and Theresa says she’s drinking lots of water, coffee and unsweetened tea, along with eating plenty of fruit.
“I’m loving peach season,” she adds.
Theresa Brandt has other tattoos, including one she calls her “tree of life” on her lower left leg. As with all of her ink, it’s mostly in purple, aqua and gold, and there are flowers representing her son, daughter and grandchild; wedding rings signifying her marriage two years ago to Joe; and limbs linking to two families.
Weeks from now, when she crosses the finish line in Charlotte, it will be all about the tree of life — for many people.

SALISBURY — When you walk into the World War I trench at Rowan Museum, sensors trip the battle sounds of... read more