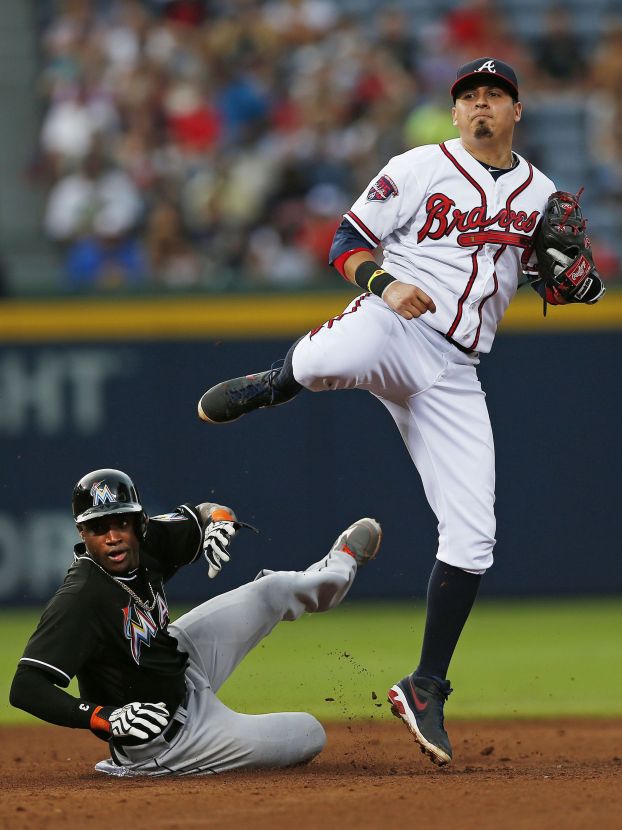 ATLANTA — Atlanta closer Craig Kimbrel blamed himself for two curveballs that went awry and cost the Braves a game.
“That’s part of baseball,” Kimbrel said Thursday night after the Miami Marlins scored in the ninth inning for a 3-2 victory. “Not everything goes perfect every time you go out there. You’ve just got to find a way to get through it and unfortunately we didn’t do it tonight.”
In a wild ninth inning, Kimbrel threw a wild pitch that allowed Marcell Ozuna to reach safely and another that advanced him to second before Jarrod Saltalamacchia drove in the go-ahead run with a single.
The Braves won once in the four-game series.
Pitching in a non-save situation with the score tied 2-all to begin the ninth, Kimbrel (0-2) struck out Garrett Jones and had Ozuna struck out, too, but the wild pitch rolled a few feet from the plate after bouncing off catcher Evan Gattis’ shin guards and Ozuna reached safely.
With Saltalamacchia batting, Ozuna advanced to second on another wild pitch and scored on the RBI single to center, easily beating B.J. Upton’s throw to the plate.
Saltalamacchia went 3 for 4 with two doubles.
“I think it’s my third time facing him,” Saltalamacchia said of Kimbrel. “He’s an All-Star closer. He’s got great stuff and really has a great idea of what he’s doing out there. In that situation, I’m just trying to not get too big, put a ball in play.”
Kimbrel, a four-time NL All-Star, allowed one hit and one run and struck out two.
Atlanta dropped 11/2 games behind Washington in the NL East. Miami, which is eight games out, moved into a tie with the New York Mets for third place.
Henderson Alvarez (7-5) gave up six hits, two runs and one walk with four strikeouts in eight innings. The Marlins are 13-3 in his last 16 starts.
Marlins closer Steve Cishek earned his 24th save in 27 chances, retiring Freddie Freeman, Justin Upton and Jason Heyward on fly balls in the ninth.
“To come in here and take three out of four keeps us alive,” Cishek said. “We have intentions to do something big this year and get to the playoffs, and that was a good way to start.”
Alvarez had struggled against the Braves, going 0-2 with a 6.86 ERA in four career starts, and he was coming off an outing that ended after 2 2-3 innings when San Francisco’s Joe Panik hit a liner off his left shin.
Chris Johnson hit his eighth homer, a two-run shot in the second that gave the Braves a 2-0 lead.
“He’s gotten better and better,” Atlanta manager Fredi Gonzalez said of Alvarez. “And I see a maturity on the mound that maybe last year you didn’t see. He was really good. He really had his pitches working.”
The Marlins tied it 2-all in the fifth on Adeiny Hechavarria’s RBI single and Christian Yelich’s forceout.
Aaron Harang, who was attempting to win his fifth straight decision, gave up seven hits, two runs and two walks and struck out five in seven innings.
Marlins manager Mike Redmond successfully challenged that Justin Upton was out to end the sixth. Upton, diving back to first base after Heyward lined out to shortstop, was originally called safe by first base umpire Rob Drake, but the call was overturned.
Redmond has successfully challenged 15 of 19 calls this year.