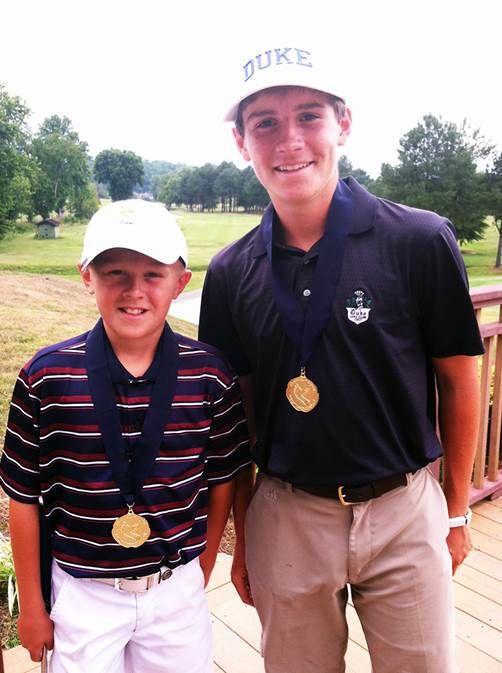 Nick Lyerly, Michael Childress, Ben Childress and Ben Rollins played in the Tarheel Youth Golf Association junior tournament on Wednesday at Maple Chase in Winston Salem.
Lyerly and Michael Childress tied for first place in the 14-15 age group at 1-under 71. Lyerly won a scorecard playoff.
Ben Childress finished second in the 11-under age group with a 41.
Rollins shot 91 and finished 22nd in the 16-18 age group.

College wood bat leagues
Avery Rogers (Guilford, East Rowan) struck out the last two batters to end Kernersville’s 8-3 win against Fayetteville on Wednesday in the Carolina-Virginia Collegiate League.
Rogers has struck out 38 in 20 2/3 innings.
Brandon Brennan pitched the Kannapolis Intimidators to a 6-2 win over Hagerstown on Wednesday at Municipal Stadium.
Kannapolis (47-52, 18-14 second half) won its third straight game.
Adam Engel and Danny Hayes homered for the Intimidators. Engel homered leading off the game.
The series in Hagerstown continues tonight.
• Nick Lomascolo (Catawba) pitched a scoreless inning in relief on Wednesday for State College.
• Daniel Wagner (South Rowan) had two hits for Birmingham on Wednesday.
• Whit Merrifield (Davie) has cooled off a little but only a little. The 25-year-old is still going 1-for-4 or 2-for-5 every night for Omaha and is batting .358 in 40 Triple-A games. Merrifield may get some time with the Kansas City Royals in September.
• Corey Seager (NW Cabarrus) is 7-for-19 since being called up to Double-A. No homers yet.

Raleigh Sanderson’s Ryan Turner scored twice on Tuesday to lead the East boys to a 4-1 win over the West in the East-West All-Star Game at UNC Greensboro.
The East leads the all-time series, 11-8-4.
The Saleeby-Fisher YMCA, East Rowan Branch, is taking registrations for the following sports:
Mighty Kickers Soccer
Open to boys and girls, ages 3-4
The Mighty Kickers league is a great introduction to the sport of soccer and teaches the fundamentals and rules of soccer along with YMCA values and principles.
Registration ends Saturday, Sept. 6.
Fall Soccer
Open to boys and girls, grades K-8 (Ages 5 – 14)
Outdoor league teaches the traditional game of soccer along with YMCA values and principles.
Registration ends Saturday, Sept. 6.
Fall T-Ball
Open to all boys and girls, grades Pre-K-1 (Ages 4 – 6)
Great Introduction to baseball for boys and girls. Players will learn the basic principles of baseball.
Registration ends Saturday, Sept. 6
Sign up today to become a volunteer coach, assistant coach, or official.
Register at the East Rowan YMCA or online at www.rowanymca.org.
For more information, contact Joe Finney at 704-279-1742 or jfinney@rowanymca.org.
Team BCR’s rookie driver, Justin Allison (West Rowan) is still searching for that first win in the ARCA Racing Series presented by Menards. Next, he will take his first look at Lucas Oil Raceway as he makes his debut on Friday, July 25 in the SCOTT Get Geared Up 200.
Allison has earned four consecutive top-10 finishes in the 2014 ARCA Racing Series season at Toledo Speedway, Pocono Raceway, Michigan Int’l Speedway and most recently at Chicagoland Speedway. His highest finishing race was at Michigan International Speedway when he earned an ARCA career best of 3rd.
The Charlotte Sports Foundation has secured a regular-season college football game for the city of Charlotte, pitting the University of Tennessee against West Virginia University. The Volunteers, from the Southeastern Conference, will face off against the Mountaineers, from the Big 12 Conference at Bank of America Stadium on September 1. The kickoff time and ticket information will be announced at a later date.
Applachian State’s women’s team will play five matches this fall, beginning with the William & Mary Invitational on Sept. 14-16.