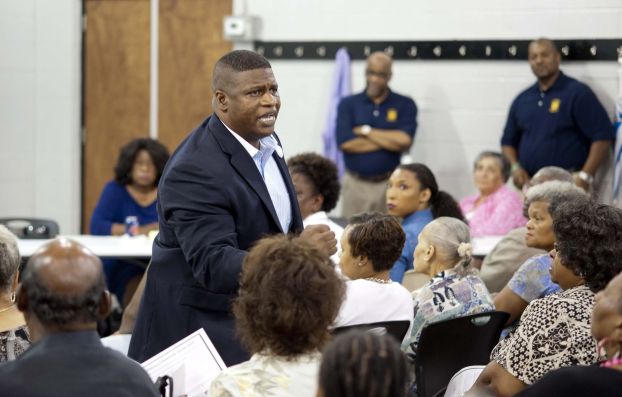 Henrietta Robinson grew up in Granite Quarry, but lived in the West End community at a time when “people knew each other.”

As Robinson was moving away from her West End neighborhood, drugs slowly moved in. So she attended a community meeting Wednesday night at Miller Recreation Center to discuss crime within the city.

“I am very moved by this,” she said afterwards.

The meeting, which lasted nearly two hours, was sponsored by The Chamber (not the Rowan County Chamber of Commerce), the West End Community Organization and the West End Pride Organization.

The purpose of the open forum, organizers said, was to elicit community discussion and hear from residents not just in the West End.

Organizers will gather the suggestions from residents and report their findings at a later date.

Before she left her West End neighborhood, Robinson said she began to see drugs in the community.

“When drugs come in, it devastates a community. They stop living,” she said.

She hopes the community can get back to some of the traditions she recalled.

“I want us to realize we all are one. We are all a part of the human race. This is a great start and I hope it continues,” Robinson said.

“Letting our voices be heard is much needed in our community,” said Dustin Wilson, who is apart of The Chamber.

He called the meeting a great outcome of people being heard. He plans to take the information he heard back into his neighborhood.

“This was great. It was very beneficial,” he said.

“We can gather and talk; we’re going to have to do something. We can’t allow fear to keep us from doing something. We have to be proactive,” said David Bush.

Tony Hillian of East Spencer was matter-of-fact about what needs to happen to bring about change.

“If you have a program, they will come. You have to have something for them to do,” he said.

Judy McDaniel said the community should be able to go back to some traditional ways of life when there were always activities for children. Among all the local summer camps, only about four were free, she said, and parents can’t afford to send their children to costly camps.

She’d also like to see mentoring programs available for the youth, especially those offered through churches.

“I hope we can find a solution to the problem,” she said.

West End Community Organization President Fannie Butler was recognized as was West End Pride President Shirley McLaughlin, both of whom welcomed everyone who gathered.

“Crime and violence does not impact one culture, one race, one zip code,” said Ken Hardin, a member of The Chamber.

Hardin believes the meeting broke down a lot of barriers.

“I felt a sense of cohesiveness; a spark to the entire community,” he said.

Hardin encouraged others to be their own leaders and take “control of your lives.” He called the meeting a game-changer for the city.

Pastor Anthony Smith said he was glad some people were able to voice their concerns, whether through speaking publicly during the forum or through the surveys.

Organizers collected over 100 surveys and plan to gather the data and reconvene in a meeting to report that data. Smith said the meeting was a great start.

Livingstone College President Dr. Jimmy Jenkins, shared his support of the West End and encouraged leaders to use the college as a resource.

One of the evening’s guest speakers, Master Trooper Clee Atkinson Jr., provided some key solutions he believes will put the city on track to taking back their neighborhoods.

Through a series of short video clips and a lively exchange, Atkinson said the biggest investment the community could make was in the youth.

He encouraged parents to parent and churches and other community leaders to be there to support as well.

He said education was the key to solving some problems, as are integrating anti-bullying and gang intervention in the schools.

Atkinson said whether parents realize it or not, heroin, meth and other drugs are infiltrating their neighborhoods.

“I’m coming to empower you guys to be a great community,” he said.

Alex Clark, another guest speaker, is a former drug dealer who spent 18 years in federal prison. He was convicted in 1996 of drug conspiracy.

Clark, who is a Salisbury native, said he got into selling drugs for the money, but his choices led him to miss out on his children’s lives and even the death of one son.

“We glamorize ‘the game,’ it’s not a game. We’re dealing with people’s lives,” Clark said.

He said he wanted to be involved in the forum because “I don’t have a problem being accountable for what I did in this community.”

He said he hoped telling his story would prevent someone else from following the same path.