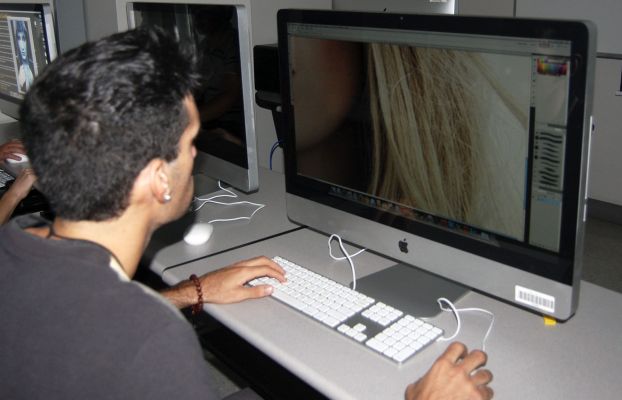 Summer camp looks a little different at Rowan-Cabarrus Community College.
This week, campers tackled graphic design at the college’s south campus. Earlier this summer, campers had the opportunity to learn video game design for Xbox and personal computers. Next week is an intermediate level graphic design camp, and two weeks from now, the college will host a mobile application development camp.
“It’s a series of camps we run based on different aspects of technology,” said Paula Dibley, director of college relations, marketing and communications for Rowan-Cabarrus.
Eric Tucker, an adjunct professor at Rowan-Cabarrus, is the instructor for the two four day graphic design camps.
Seven campers are attending the beginning camp this week, and five are registered for next week’s intermediate camp.
Tucker said the goal of the camp is to prepare students for classes on the college level.
Campers learn to use Photoshop, how to handle files, retouch photos and coloring, manipulate photos, use type and create graphics for television, web and print, Tucker said.
Students use stock photos and their own pictures to complete tutorials and learn the concepts presented at the camp.
One project includes using multiple images to create one cohesive and realistic looking photo.
Karlyn Brafford graduated high school in May and will be taking classes at Rowan-Cabarrus in the fall.
“I’m interested in graphic design and doing it as a career,” she said.
Brafford added she particularly enjoys photography.
“I’m just very artistic,” she said.
Brafford said she learned a number of skills over the week, with photo manipulation being her favorite.
“I think it will help a lot, especially with photography,” she said.
David Wilcoxson said he chose to attend the camp to learn “all the fundamentals and basics.”
Wilcoxson is considering a career in motion graphics and illustration, and he felt a graphic design camp would help him get his foot in the door.
“It’s very individualized,” he said, adding that the small class allowed them each to get one-on-one time with the instructor.
Wilcoxson also enjoyed the hands-on element of the camp.
Dibley added that the college tries to keep a ratio of five or six campers to each instructor at these camps. If more students showed interest, more instructors would be added.
“The college is very much committed to STEM,” she said, referring to science, technology, engineering and math education.
Opinions on STEM subjects are formed as early as fourth grade, and Rowan-Cabarrus wants to influence those opinions as much as possible, Dibley said.
The camps are geared toward rising ninth graders and above. There is no upper cut of limit, but most campers are high school or college aged.
Some younger students have been admitted, though.
“We have made exceptions where there were interest and skills,” Dibley said.
Dibley hopes the camps will raise awareness about the college’s Career and College Promise program, which allows high school juniors and seniors to take college classes for free simultaneously with high school classes.
“Camp has become a bigger focus for us over the past few years,” she said.