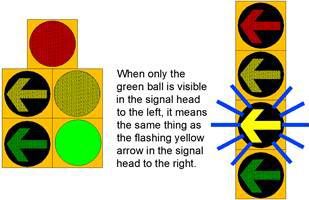 SALISBURY — Turning left is getting easier in Salisbury.
Or harder, depending on your perspective.
City Engineer Wendy Brindle said she’s taken many phone calls about the new flashing yellow arrows at some intersections that allow left turns while oncoming traffic continues to flow.
“People either you love them, or they’re confused by them,” Brindle said.
The new flashing yellow arrow at the intersection of Jake Alexander Boulevard at Mooresville Road will disappear sometime in the coming year when the state restripes the road to include double left turn lanes from Jake onto Mooresville.
Brindle spends time explaining the flashing yellow arrows to help motorists understand how they work. After one resident called the N.C. Department of Transportation to report a “near miss” at an intersection with a flashing yellow arrow, the state asked the city to issue an educational news release.
Brindle said she is not aware of any crashes in Salisbury due to the flashing arrows, which started appearing this spring in on some of the city’s upgraded traffic signals. But she is doing a study of two intersections — Jake at Mooresville Road and Jake at Lincolnton Road — that will include looking through accident reports for any sign of a problem.
The arrows are actually designed — and proven — to reduce crashes, Brindle said.
“Many drivers naturally think a solid green means go,” says Brindle. “However, some drivers forget to yield to oncoming traffic when they have a green light. We hope the change to a flashing yellow arrow will become more intuitive for drivers.”
The Federal Highway Administration authorized use of flashing yellow arrows in 2009 after extensive testing. Studies show that drivers had fewer crashes with flashing yellow left-turn arrows than with traditional yield-on-green signal configurations.
The use of flashing yellow arrows at busy intersections is becoming more popular in cities all over the country, but some drivers are still confused about how to treat the flashing yellow arrow when navigating through an intersection, Brindle said.
Here are the basics:
• A flashing yellow arrow means left turns are permitted, but a driver must first yield to oncoming traffic and pedestrians and then proceed with caution.
The flashing yellow arrow is sometimes used to replace the solid green light, which remains a signal for a driver to proceed with a left turn after yielding to oncoming traffic and pedestrians.
• When the available time for the flashing yellow arrow ends, the solid yellow left-turn arrow begins. The solid yellow retains its standard meaning: The left turn signal is about to go to red and you should prepare to stop, or prepare to complete your left turn if you are in the intersection.
• A solid red arrow still means that drivers intending to turn left must stop and wait.
• A solid green arrow means left turns have the right-of-way and oncoming traffic has a red light.
Whether motorists turning left has a solid green ball or a flashing yellow arrow, it’s up to them to determine if they have a sufficient gap in traffic to make the turn, Brindle said. The flashing arrow can remind left-turning motorists that they must yield to oncoming traffic.
If Brindle determines that the arrows have been a problem at any intersection, she can turn them off during peak volume hours and then turn them back when there is less traffic. The city’s upgraded signals give her that capability.
Crews from the city and N.C. Department of Transportation have been working on the city’s $3.6 million signal upgrade since February 2012, including new wiring, cabinets, technology and signals for traffic lights in Salisbury. Because the improvements should improve traffic flow and cut down on idling time at stoplights, the federal Congestion Mitigation and Air Quality Improvement Program, or CMAQ, is paying 80 percent of the cost. The city and N.C. DOT are splitting the remaining 20 percent.
Since the state owns 74 of the traffic signals in Salisbury and the city owns 11, the state is paying the lion’s share. Salisbury’s portion is $110,000.
The state has upgraded 47 signals and the city has upgraded eight.
Contact reporter Emily Ford at 704-797-4264.

Holiday Inn Express gets thumbs up

SALISBURY — The city is one step closer to having another new hotel and welcoming Holiday Inn back to Salisbury.... read more