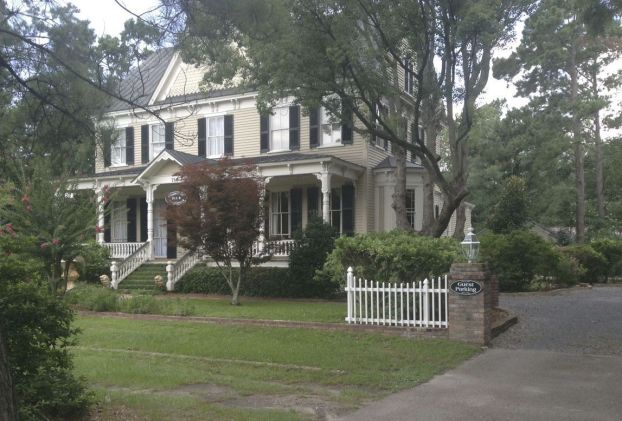 David Freeze: Lots of trials but some fun, too

Once again, the weather was just a little foggy this morning. Still, down the road from Andrews, S.C. I went. My flashing red light shows up really well and everyone gave me plenty of room.

I had two choices, and of course one was to follow the Adventure Cycling map and probably see lots more woods and rough roads. The other was to wing it and go see what there was to see. That’s the choice I made.

Out of Andrews on Hwy. 41 took me along another unchanging roads for 14 miles, but I wanted to take U.S. 17A and see at least a few real towns. First was Jamestown, but I was only there long enough to change roads. Next was Macedonia, though it was even hard to notice on a bike. About this time I had alternating rumble strips and no shoulder at all. It could have been dangerous but the traffic was reasonable. U.S. 17A alternates between moderately good paving and some that rattled my whole body over endless bumps that couldn’t be avoided.

Right before Monck’s Corner, I had good and smooth shoulders. It was about the only time during the day that this occurred. I didn’t stay long in this town, except to find that my new favorite breakfast was not available at the local Wendy’s.

I headed next to Summerville, finding that Summerville was first called Pineland and it passed one of the nation’s first laws about not cutting down trees. The settlement began about the time of the Revolutionary War. Summerville claims the right also of making the nation’s first sweet tea. For sure, it has one of the prettiest historic areas that I have seen. I will go back, and maybe see Lou Melfi again. He kept me on the right track when I needed directions.

On the 16-mile ride to Summerville from Monck’s Corner, I had good pavement but no bike lanes. I was amazed to find that the two towns were connected by one 16-mile long sidewalk. It looked brand new.

All this time, I was on U.S. 17A. Between Summerville and Cottageville, the road got worse. There was plenty of broken pavement, and a long stretch where there were no shoulders at all. Most on my mind were dozens of logging trucks racing back and forth to deliver their loads. I began to realize that I was seeing the same trucks over and over, running empty one way and loaded the other. One truck stood out for his unusual metal sun visor, so he was easy to spot. But another, white and dirty, kept getting too close to me especially when he was empty. Hopefully, I don’t see him again.

Between Cottageville and Walterboro, the road had broken and the uneven pavement reminded me of Colorado roads. The difference was that today’s road had plenty of traffic. We had a short, heavy rain just before reaching Walterboro, which brought me to the town’s first convenience store soaking wet. After getting directions from three different people for a reasonable motel, I headed off.

Walterboro has another beautiful historic district. One after another of 100-150 year-old homes. What amazed me most is that Walterboro is the home of the Tuskegee Airmen. I rode over to the airport to see their monument. Walterboro Air Field was one of the final training points for pilots heading to World War ll and once had over 6,000 men stationed there.

After a quick stop at the IGA grocery store, I headed off in search of that motel. Three miles later, one local resident who wanted me to stay at the Rice Planter’s Inn was standing beside the road telling me where to turn. Keep in mind that this was at least miles from where we first saw each other. By the way, he was perfect in his choice. The Rice Planter’s inn has everything, and the price couldn’t be better. Plus, I get a free breakfast at the Waffle House in the morning. I am settled in Walterboro for the night after 91 miles, some of the bumpiest on that bike seat ever. I was glad to get off for the night.

Tomorrow, I am headed into Georgia, probably near Statesboro. Just Georgia and Florida to go. One of the things that I appreciate the most is after I get off the bike and submit my report and photos, then I can relax. Riding that bike on days like to today requires a lot of concentration, and it is good to turn that off. No matter, it’s time for another adventure tomorrow as we head into Georgia.

Your daily look at late-breaking news, upcoming events and the stories that will be talked about today: 1. THE FINAL... read more