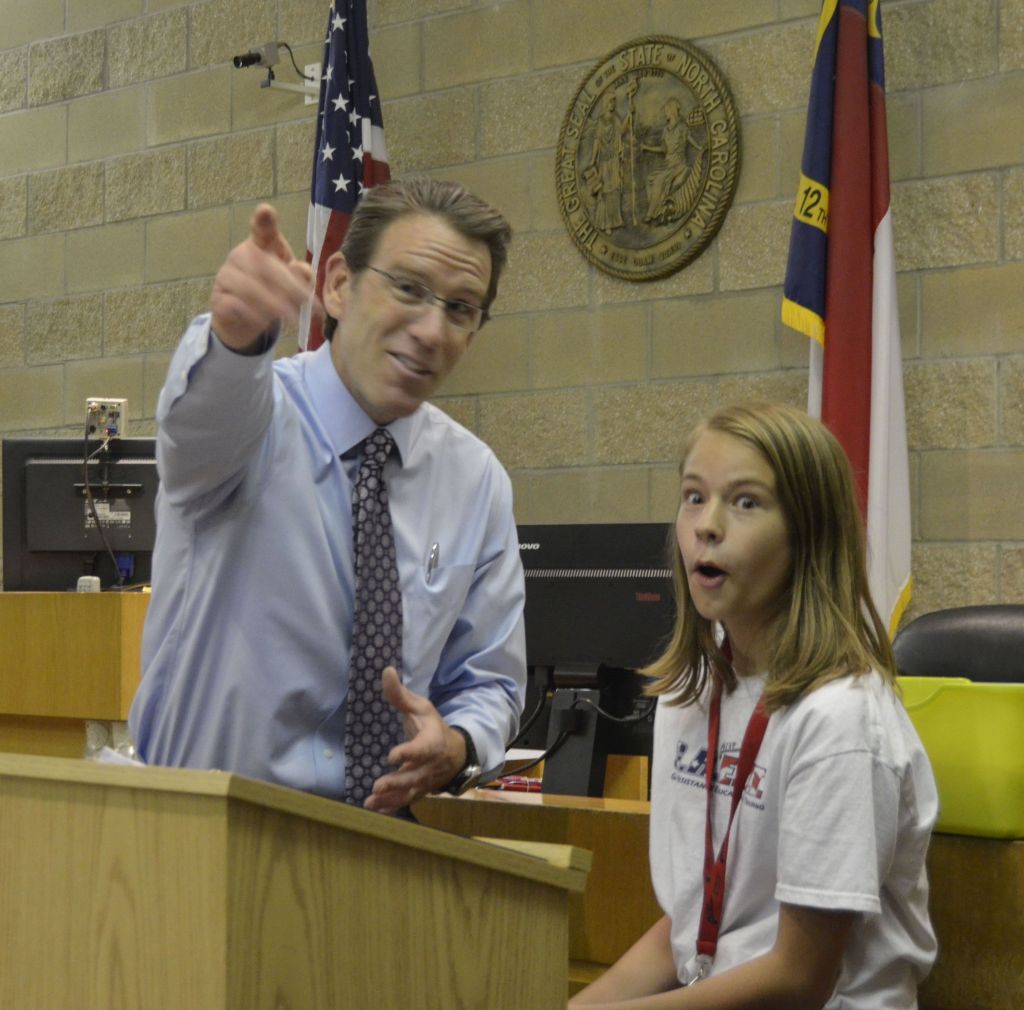 Brandon Jefferson sat on the district court judge’s bench with an intense look, one would’ve almost thought the 6-foot-2 middle schooler was practicing for a future role.
Jefferson, 12, is one of nearly 20 campers who got a close-up view of the court system Tuesday during a session of the Rowan County Sheriff’s Office Gang Resistance Education And Training (G.R.E.A.T.) program.
The program, normally offered during the school year, began Monday and will include a week’s worth of activities.
This is the second week of a three-week session. The first was held in June in the western part of the county. This week’s session is in eastern Rowan County. The final session will take place next month in Salisbury.
The camp is a revival of a program that the sheriff’s office held years ago. The camp curriculum will include issues such as communicating with others, conflict resolution, goal setting, healthy self-image and juvenile law procedures.
Jefferson said he signed up for the camp because he thought it would help him learn something new.
When prompted to specify what he’s learned, Jefferson said he’s learned about gangs. His grandmother encouraged him to enroll in the camp. He’s attended a YMCA camp in the past.
“Just because you’ve been to a camp like this before doesn’t mean you can’t learn something,” he said.
He enjoyed his experience in court role playing as the judge and looks forward to going to Dan Nicholas Park later in the week.
Christian Morris, 13, is an Explorer with the Sheriff’s Office, who joined after talking to a friend who was an Explorer.
He wants to become a police officer, Morris said. Going to the courthouse and portraying the district attorney was “pretty cool,” he said.
Morris said he enjoys the camp outings.
Samantha Nanney, 14, said her favorite part of the camp so far has been role play in court. Samantha was the defendant in the case.
“I got to do the fake trial and got to see how it would be in court,” she said.
Her niece, Cheyenne Nanney, 12, also attended the camp.
In the two days of camp, Cheyenne most enjoyed the tour of the Rowan Museum. She was the police officer who testified on the witness stand during the mock trial.
“It’s really fun. I’m looking forward to tomorrow, going to Dan Nicholas Park,” she said.
Sarah Kennedy, a soft spoken 10-year-old, said it’s her first time ever attending a camp. She and her brother, Cody Robinson, 14, are enrolled.
“It’s really fun, the places we’ve gone. I’ve learned so much,” she said.
Master deputies Jennifer Mason and Ryan Walker have kicked the camp in high gear along with several deputies who’ve volunteered during each session.
“The biggest thing is it’s for the kids,” Mason said.
She said some of the children don’t get to build a relationship with officers. Some may have only seen officers at a low point in their lives or seen them arrest family members.
On the ride over to Rockwell Park, Mason said one young lady told her she thought she wanted to join the military or be in law enforcement.
Walker said there may be some child who can encourage another to open up to an officer by getting to know and trust officers through a camp setting.
Contact reporter Shavonne Potts at 704-797-4253.