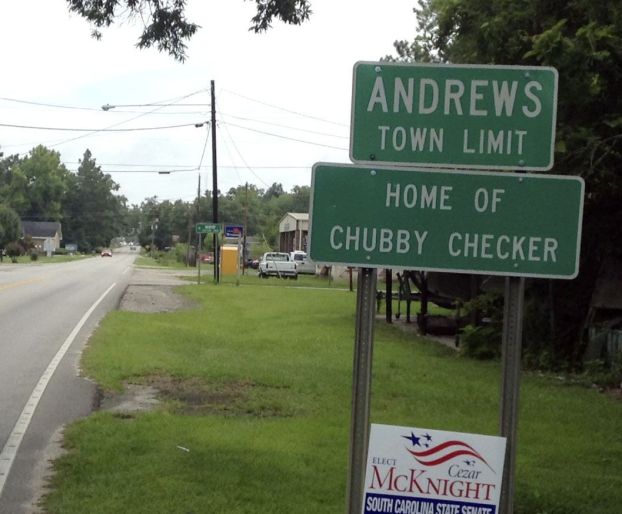 “Let’s twist again, like we did last summer!” It took a while, but I have a song on my mind. Last year, crossing the country, I sang constantly to pass the time on the bike. “East bound and down, loaded up and truckin’. Are we gonna do what they say can’t be done? I’ve got a long way to go and a short time to get there,” and so on. Late this afternoon, I rolled into Andrews, S.C., after not the most exciting day. But the sight of the sign that said, ‘Home of Chubby Checker’ got me going and it felt good.
Andrews is a pretty little town that was once dubbed the fastest growing city in the United States during the 1920s. I am sitting outside on a nice chair, in front of my very good motel just watching the traffic go by while I write this. Couldn’t think of much I would rather be doing. The church chimes are playing on the next street over. Just need some watermelon.
I got up just after 5 this morning, thinking that I would get another early start. For the first time, it was both cloudy and foggy, so I had to wait a little bit. I walked the bike across the street and talked to one of the nicest local residents. She gave me the scoop on directions and more. Having waited long enough, I turned on the flashing light on the rear of my bike and headed out. The list of towns today were not very well known, starting with Wampee. I got there on Hwy. 90, and still really didn’t know when I got there. I was somewhere close to a great Wendy’s though, and learned the first of several new things. Keith Tedder told me that I could order a egg, cheese, and tomato panini without it being a special order. That thing was so good that I will get more.
Then came the first hiccup. I was supposed to turn on Hwy. 31, but the road was closed with a bridge out sign. I didn’t chance it and took Hwy. 90 toward Conway. Very soon, it had dreaded rumble strips that made me ride in the road. There was a good bit of traffic and lots of trucks. Finally, I made the 14 miles to Conway and got lost after listening to a policeman tell me how to find Hwy. 701. A nice lady in a convenience store put me back on track, but I ended up on the worst road of the trip yet. That includes Massachusetts city streets.
I kept waiting for this town called Bucksport, which turned out to be another no services town. Then the next town of Yauhannah was nothing better. Looked like not more than a bunch of hunting, fishing and deer processing. Maybe they shouldn’t have so many deer and fish lying beside the road and smelling bad. On to Pleasant Hill, which there were two nice folks in the store, but not much else.
Shortly afterwards the rain started. Clouds looked serious, but about 15 minutes was all the rain we got. Just a cooling off shower. I passed by Rhems and never saw it.
Now on Hwy. 41, another one with rumble strips but not much traffic, I headed for Andrews. First stop was at the Post Office to ship some things back home. Just as I did last year in Kansas, there were just certain things it was time to send home. One of them was the bike combination lock that I have never even once used to lock up the bike over the last two summers. I also sent back all the used maps from the first part of the trip, a bunch of notes and a pair of waterproof pants. Only about four pounds in weight, but everything counts and takes up space.
Tomorrow, I hope to get close to Walterboro, but the ride may be too long. I can’t find any cheap motels there yet, plus I might change the Adventure Cycling route to get away from rumble strips and add more scenery. Tomorrow will probably develop as it goes. Two foxes and a couple of heron did add to the day though.
For tonight, I am in Andrews, SC, after 84 miles. Now it is time to eat some of that watermelon that I got at the Piggly Wiggly, and hum a tune or two.
Rowan County resident David Freeze is cycling from Bar Harbor, Maine, to Key West, Fla. Contact him at david.freeze@ctc.net.

And the winner is…