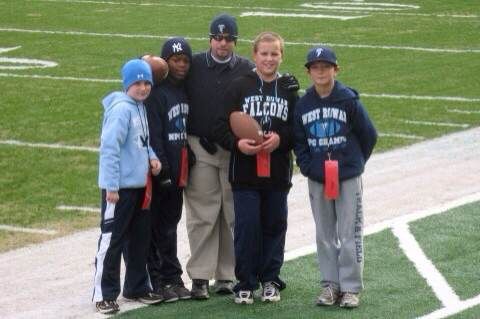 A handful of people were there for West Rowan’s three state championships and nine consecutive winning seasons.
There was one guy who you wanted to have the ball in his hands.
That man, Billy Guinn, won’t be there when West Rowan hosts Mooresville to start the season in a few weeks. Someone else will help coordinate the ball boys and it won’t be the same.
Guinn died earlier this month at 34. He volunteered with West athletics for all of his adult life after graduating in 1999. You could find him patrolling the West sideline, encouraging players and boosting morale when it was needed.
“He was the biggest, most loyal Falcon fan,” West Rowan coach Scott Young said. “It probably won’t hit me he’s gone until the first game this year.”
Guinn didn’t have an official title but never asked for one. He only missed two football games in 10 years. During that time, he also was a staple at basketball and baseball games.
Young, who’s leading the West squad in the East-West All-Star Game at Grimsley High in Greensboro, said Guinn was as much a part of the Falcons’ run as anybody.
“Billy was a student when I got there in 1998,” Young said. “He helped me with the fields as a senior. He always had a heavy interest in the athletic programs. He’s been a part of us since he graduated and was very dedicated.”
Guinn also prided himself as an assistant on some of the junior varsity baseball teams led by Todd Bell, now the athletic director. Bell noticed a guy who always showed up on Thursday and Friday to stand on the sideline with the team. He’d ride to away games..
“Every year I coached baseball, he was my right-hand man,” Bell said. “He never received any pay and never expected anything.”
In 2001, Bell and Guinn helped the JV team to an undefeated record. Guinn called the pitches.
“I let him call every pitch,” Bell said. “That was his highlight at the end of the season.”
Guinn was a truck driver and attended Woodleaf Baptist Church. He was married with a son.
“Everyone remembers Billy being a great guy,” said Joe Nixon, former West assistant and current North Rowan head coach. “He loved being part of the West Rowan community, He was always there to help out with what needed to be done.”