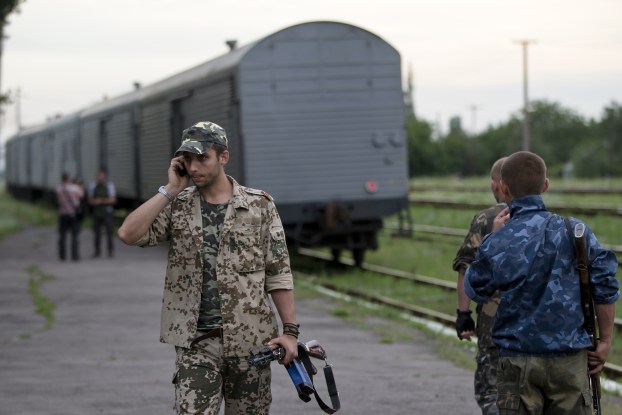 HRABOVE, Ukraine (AP) — Bowing to international pressure, pro-Moscow separatists released a train packed with bodies and handed over the black boxes from the downed Malaysia Airlines plane, four days after it plunged into rebel-held eastern Ukraine.
With body parts decaying in sweltering heat and signs that evidence at the crash site was mishandled, anger in Western capitals has mounted at the rebels and their allies in Moscow. Their reluctant cooperation will soothe mourning families and help investigators, but may do little to reconcile the East-West powers struggling over Ukraine’s future.
Russia’s Defense Ministry said Monday it saw no evidence a missile was fired and denied involvement in the downing of Flight 17 — and suggested the Ukrainian military was at fault. President Vladimir Putin spoke out but showed no sign of abandoning the separatists as fighting flared anew near the site of the crash.
President Barack Obama accused the rebels of tampering with evidence and insulting victims’ families, warning of new sanctions. Europeans will consider their own sanctions Tuesday.
The bodies of the 298 victims, most from the Netherlands, have become a part of the conflict in Ukraine because they could hold evidence of what brought the plane down on July 17 as it was flying from Amsterdam to Kuala Lumpur.
Grief turned to anger as families begged to get the bodies of their loved ones back, while the separatists held on to the remains.
“Bodies are just lying there for three days in the hot sun. There are people who have this on their conscience,” said Silene Fredriksz-Hoogzand, whose son, Bryce, and his girlfriend Daisy Oehlers died on their way to a vacation in Bali, in an interview with The Associated Press in the Netherlands. “When I am in my bed at night, I see my son lying on the ground. … They have to come home, not only those two. Everybody has to come home.”
International forensics experts finally gained access to the crash site Monday — an emotional experience for the head of the Dutch National Forensic Investigations Team, Peter Van Vliet. Seeing the wreckage gave him goosebumps, he said.
The team stumbled across remains that had not yet been removed and inspected the perished passengers’ luggage.
In Torez, a rebel-held town 9 miles from the crash site, inspectors bowed heads and clasped hands before climbing aboard refrigerated train cars holding the collected bodies. Armed rebels surrounded them, while commuters boarded other trains nearby.
The smell of decay was overwhelming. Workers wore masks, while passersby twisted their faces in horror at the odor. Temperatures hit 84 degrees, and a train engineer told the AP that a power outage had hit the refrigeration system temporarily overnight.
The rebels in Torez did not appear too conciliatory as the tense day wore on. They repeatedly tried to block reporters from access to the visiting experts, growing more aggressive throughout.
Late Monday, trucks arrived at the Torez station with plastic bags apparently filled with body parts, as well as piles of luggage — suitcases, backpacks, a purse with a Louis Vuitton label.
Ukrainian authorities said the total number of bodies recovered was 282.
Dutch investigators demanded the separatists transfer the bodies immediately, and the rebels complied after several hours.
With a long whistle and puff of smoke, the train bearing the bodies pulled slowly out of the station. Rebels holding automatic rifles walked alongside as it chugged away, a cluster of children on bicycles looking on.
It was headed through troubled territory, its destination not 100 percent clear.
Dutch Prime Minister Mark Rutte said the train was heading for the rebel-held city of Donetsk, 30 miles west of the crash site, and then on to Kharkiv, site of a crisis center controlled by the Ukrainian government. He said Ukrainian authorities have agreed to let the bodies be transferred from there to the Netherlands for identification, but gave no time frame.
Early Tuesday, the rebels handed over both black boxes from Flight 17 to Malaysian investigators in Donetsk. A rebel leader, Alexander Borodai, said the orange-colored flight recorders were being handed over to Malaysian officials on the condition that they would be delivered to experts at the International Civil Aviation Organization.
“I can see that the black box is intact even though a little bit damaged, but in a good condition,” said Col. Mohamad Sakri of the Malaysian National Security Council. He added that the number one priority was for the bodies of the victims to be delivered to Amsterdam.
Earlier, a team of international observers at the sprawling crash site described strange behavior by workers.
“When we were leaving, we observed workers there hacking into the fuselage with gas-powered equipment,” OSCE spokesman Michael Bociurkiw told reporters in Donetsk.
He said there was no security perimeter Monday at one of the bigger debris fields, and monitors saw that one of the largest pieces of the plane “had somewhat been split or moved apart.”
In Washington, Obama asked, “What exactly are they trying to hide?”
“This is an insult to those who have lost loved ones. This is the kind of behavior that has no place in the community of nations,” he said.
On Sunday, the U.S. said there was “powerful” evidence that the rebels had shot down the plane with a Russian surface-to-air missile, including video of a rocket launcher, one surface-to-air missile missing, being driven away from the likely launch site; imagery showing the firing; phone calls claiming credit for the missile strike and phone recordings said to reveal a cover-up at the crash site.