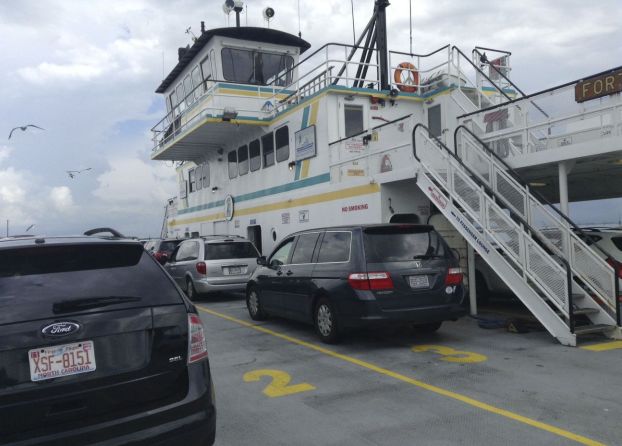 Pedaling through Fort Fisher, trying to beat the heavy rain

Today, I planned to get started as early as there was daylight, knowing that I had a lot of ground to cover. The skies were cloudy and threatening rain early, plus it was warm and humid. I started out from Surf City on Highways 210 and then 17 as I headed toward Wilmington. Traffic was moderate to begin with, but increased as I got closer to Wilmington. Still, there were good shoulders and courteous drivers, so the ride was off to a good start.

After reaching Wilmington, I took Highways 132 and then 421 toward Carolina Beach. I was amazed at how much Carolina Beach has changed since the last time I was there. We came here to play softball and had several other vacations over the years. The last 10 years have changed the place dramatically, with many more choices for restaurants and shopping now. Hap Alexander sent me an email to stop and get a free breakfast on him, but I didn’t get the message in time. It would have been fun to do.

The first rain of the morning was falling as I turned toward Fort Fisher. The ferry schedule had been posted several times already, but I thought there was no way to make it by the next one at 10:45 a.m. Yet the closer I got, the more I pushed it and pulled in just as the last car was being loaded. This time, the ride wasn’t free. I’m not sure how much for cars, but the fee is $2 for a bike. The rain stopped and it was a beautiful ride.

We got off the ferry at Southport, then I rode into the town. Southport is much bigger than I figured, with plenty of trendy little shops and a lots to see and do. After taking a few photos, I headed on down Highway 211 toward Supply. That is another long and very straight road that doesn’t have much scenery, making it seem even longer.

Next came a turn south on Highway 17 towards Shallotte and Little River. My good friend and fellow cyclist Dwight Howell was trying to get together as I passed close to Ocean Isle, but we missed on our phone calls a couple of times. Dwight’s family is vacationing this week and it would have been nice to see him.

As I continued on toward Little River, I was pedaling along in a daze when I saw two guys standing beside the road waving me in. It was wonderful and a huge boost to see Bobby and Chris Sloop and Chris’ son, Keaton. They live close to me on Patterson Road but were riding through Myrtle Beach today. They spotted me on the way south as they were headed back north. It was great to see them, especially near the end of long day of riding.

Next up was the South Carolina line. About that time, after repeated light rain, the heavier stuff got going. I had already called last night about a place called the Lake Shore Motel, and it turned out to be as good as I expected. There is a nice little lake to look at, even though it has been raining now for about three hours. For the third time on the trip from Maine, heavy rain has come late in the day and I made it into the dry for the night. I am in Little River, S.C. after a ride of 94 miles.

Tomorrow, I will head away from the coast for the time being toward towns like Monck’s Corner and Walterboro, S.C.

As I mentioned last night, I have a pretty good handle on the amount of miles remaining between here and Key West, Florida. It looks like about 1,060 miles to go. My prayers include that drivers will be continue to be courteous, not impatient, and be willing to share the road. Key West, here I come.