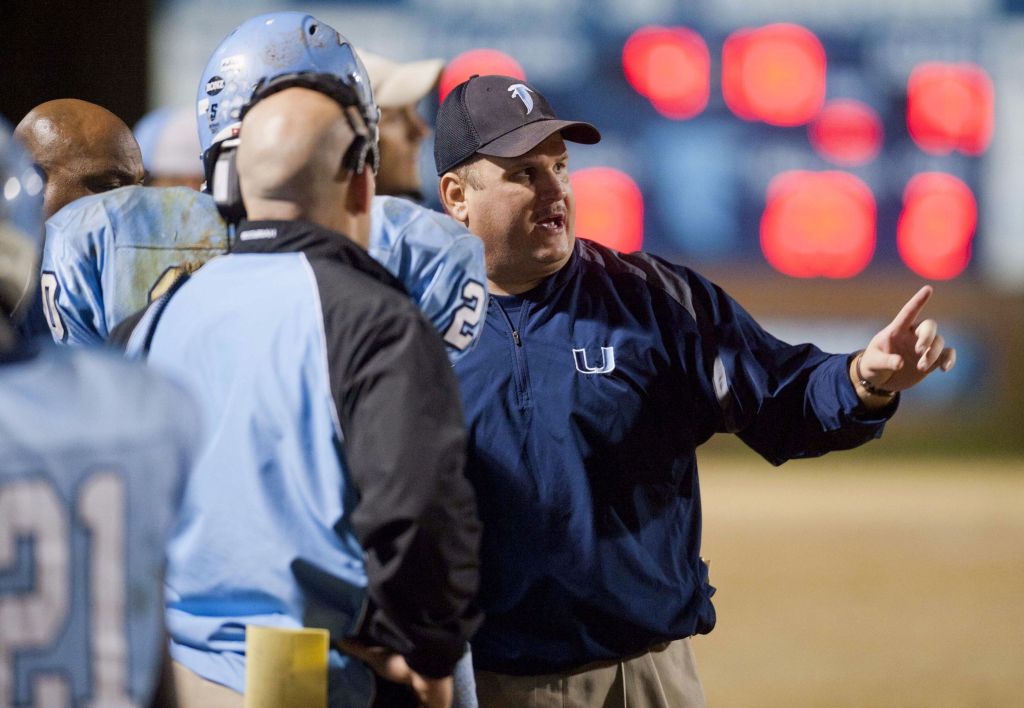 GREENSBORO — Make no mistake, when Scott Young leads the West squad onto the field at the East-West All-Star football game tonight, it’s not an exhibition.
That’s not the approach that’s landed him three state championship rings and its not one he’s entering today with.
“There is a scoreboard,” Young said Wednesday night while rounding up the team to go see 22 Jump Street at a local theater. “So yeah, we wanna win. We want these guys to have the best experience possible.”
Young, about to enter his 17th season at West Rowan, was named a head coach in the game last year. It was only a matter of time for one of the state’s more accomplished coaches. As you probably know, Young guided West to nine straight seasons of double-digit wins from 2004 to 2012.
After a year hiatus at High Point’s Simeon Stadium, the game returns to Jamieson Stadium on the campus of Grimsley High.
Local selections for the game included West offensive lineman Chris Hassard and North Rowan linebacker Xavier Robinson. Both were all-county picks last year with Robinson serving as the county’s Defensive Player of they Year. Hassard will play at UNC Pembroke and Robinson’s joining St. Augustine’s. Robinson and Hassard are projected to start.
“They’re both great players and great people,” Young said.
A.L. Brown’s Kyrell Williamson, a linebacker headed to Winston-Salem State, and receiver/DB Johnny Delahoussaey, who signed with the University of Charleston, are also in the game. Williamson was the MECKA Defensive Player of the Year.
Young said the coaches have been in town since last Wednesday and the players reported Thursday.
“It’s been awesome,” Young said. “They’re all really good players and also great kids. I’ve coached in the Shrine Bowl before and we had some disciplinary issues there. With the 32 we have here, there’s been no problems.”
The team attended a Greensboro Grasshoppers game in addition to Tuesday’s movie and attending the basketball games Monday night. National champion coach Gene Chizik is scheduled to speak today as part of the coaching clinic.
“Greensboro takes pride in this game,” Young said. “They’ve really rolled out the red carpet for us.”
Brett Chappell (Pisgah), Mark Holcomb (North Davidson), Jeremy Funderburk (Wilkes Central), Keith Phillips (Ashe County) and Lin Stadler (Rockingham County) are the West assistant coaches.
“Not only am I working with great players, the coaches are first-class,” Young said. “
Tyler Bray, who helped South Point eliminate West Rowan in the first round of the state playoffs last year, will get the start at running back.
West quarterback Logan Bradley led Gastonia Forestview to the 3A region final, throwing for 3,182 yards and 39 touchdowns.
Kenny Purvis, who broke records at Central Cabarrus last year, will be a factor on offense. Purvis rushed for 477 yards last year against Hickory Ridge to snap a school record. Eastern Guilford’s Raquan Jones and Pisgah’s Hunter Wike also figure to make some noise.
The game begins at 8 p.m. with a fireworks show at halftime. The West squad pulled out a 14-7 victory last year.