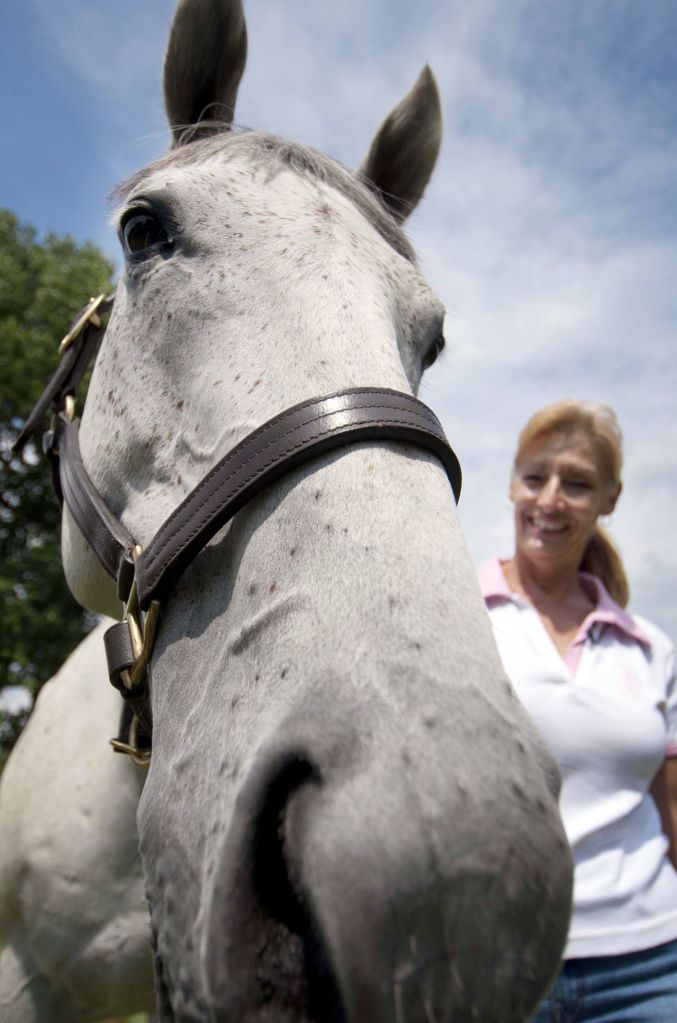 SALISBURY — On the 16-acre Double M Farm off Price Road, Blue finds himself in horse heaven.

The two ponds, all the pasture land, the four saddles and 10 bridles — it’s all for him, the only horse on this idyllic farm of Ann and Dave Moulton’s.

A sticker on the back of Ann’s sports utility vehicle suggests some of her feelings about Blue: “My Best Friend Lives in a Barn.” But it doesn’t begin to express her love for this 7-year-old dapple-gray.

There’s a reason she considers Kentucky-bred Blue, whose registered name with The Jockey Club is Gentleman Breck, as a duke, prince or king.

Blue is a great-great grandson of Secretariat, arguably the most famous thoroughbred of all time. Secretariat won horse racing’s Triple Crown in 1973 by setting track records in the Kentucky Derby and Preakness and establishing a world record in winning the Belmont Stakes by a mind-boggling 31 lengths.

Blue is the same towering height and weighs 1,250 pounds. He looks as muscular and stout as his famous ancestor, and the Moultons say he exhibits the same kind of speed.

On the farm, Blue has galloped past their four-wheeler when it was going 35 mph, Dave says.

“When you get on him, you better know what you’re doing,” Ann adds. “He knows he’s a big horse. When he starts running, you can’t stop him. He can put you on the back of the saddle and keep you there.”

“Blue-Blue,” as Ann likes to shout out to him, has a big engine, a big chest and a big heart.

Ann and the horse trust each other enough so that Ann can lie with Blue in the pasture, or sit on top of a lounging Blue as though he were a park bench. This is pretty unusual behavior from a high-strung thoroughbred.

He likes most strangers, finding them a curiosity more than anything. “A lot of people come to see him because they know the lineage,” Ann says. Blue also can be a little snooty, as if he recognizes his bloodlines.

“Blue knows who he is,” Ann says. “You can’t demand anything from him.”

Blue — or Gentleman Breck — foaled April 25, 2007, in Kentucky and was originally owned by Patricia Skaggs. He was nominated for the Breeders’ Cup as a 2-year-old, but he never raced, except for match races.

Blue’s father was Yankee Gentleman; his mother, Capellas New Star. Yankee Gentleman proved to be a great runner in Louisiana, racking up $2.7 million in earnings before going to stud.

The name Gentleman Breck came from his father and “Breck” had been the name of Skaggs’ high school in Lexington, Ky.

The Moultons have Blue’s lineage and certificate of foal registration from The Jockey Club and his nomination to the Breeder’s Cup. Ann thinks when Blue’s racing career didn’t pan out, he was a stud for awhile — though there’s no documentation. He’s a gelding (castrated) now.

Skaggs sold Blue to a central South Carolina horse farm, from where the Moultons purchased him in 2011.

“The reason he’s not on the track — you’re looking at her,” Ann says. “… We’re going to live out our lives together, and I hope one day to show him.”

Ann Moulton is convinced her coming to own Blue is “a God thing.”

A native of Greenwood, S.C., and a horsewoman all of her life, Ann had a pinto pony named Champ when she was 5 and started riding Tar Baby, a full-grown quarter horse, by age 7.

Her Uncle Barney bought her a quarter horse named Dance when she was 13. She trained him for barrels and poles in arena races, and they won plenty of ribbons together.

In the summers she would visit her aunt and uncle in Aiken, S.C., which is horse country, and they would take her to the stables and training tracks where thoroughbreds were being worked. She also got her first chance in Aiken to ride a racehorse.

“I had tears running down my face,” she says of the telecast. “To me, Secretariat was the greatest athlete that had ever walked this earth on four legs — a super horse that only God could make.”

She wondered what it would be like to touch or ride a horse of that magnitude, and Ann says she prayed God would someday bless her with a horse of his choice.

In the years that followed, Moulton would live in Georgia, Florida and North Carolina while going up and down the East Coast riding, showing and training other people’s horses.

When the Moultons settled on the Price Road farm about three years ago, Dave said it was time for Ann to get a horse for herself. “So I asked God, did he have a special horse for me, and would he show me?” Ann says.

She took her search online and was intrigued by the photograph of the roan horse in South Carolina.

In September 2011, the Moultons traveled to the farm in central South Carolina without even calling the owner first. In fact, they trespassed, and Ann’s heart melted at her initial glimpse of the big horse.

“I walked up to the pasture, and this horse walked up to me and put his head and neck around me and gave me a hug,” Ann says.

Dave Moulton says he reached back for his checkbook about the same time.

Ann Moulton claims she never knew Gentleman Breck’s connection to Secretariat until getting him home and turning up his lip to determine whether he had a thoroughbred’s tattoo.

He did, and that number led them to The Jockey Club registration for Gentleman Breck. (Ann has always preferred her stable name for him of “Blue.”)

“I had just bought the great-great grandson of Secretariat,” Ann says. “I had forgotten my prayer — it had been so long — but God never did.”

Today, Ann is still trying to recover from neck surgery and a bum shoulder from all of her years of riding.

Blue is her greatest therapy.

“I can go out there and just be around him, and all my cares go away,” she says. “I feel like I’m blessed to have this horse.”

Ann thinks Blue is protective of her. On the farm, he has killed a coyote, wild turkey and jackrabbit.

The horse also has tried to help with the chores. When a load of winter hay arrived once, he grabbed bales off the truck and tossed them down.

“If he would just throw them in the right place,” Ann says.

Dave Moulton hopes to build a new barn in the future. It’s just one more amenity for the horse who knows he’s royalty.