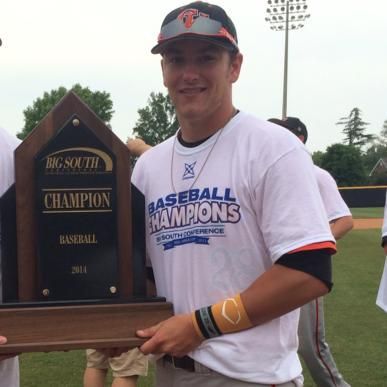 CORAL SPRINGS, Fla. — Outfielder Greg Tonnesen’s freshman season at Campbell included just seven games and three plate appearances, but it was a long way from discouraging.
Tonnesen, a Carson graduate who joined the Camels as a preferred walkon, knew his freshman season would be spent mostly watching and learning, so he kept his mouth shut and his eyes and ears open.
“I knew going in at a good Division I program it was going to be a building year, but hopefully a building year that would prepare me for the future,” Tonnesen said. “It’s looking good for next season. We lost three senior outfielders, and I’ll have a chance to compete for a position.”
Tonnesen isn’t a burner, so he won’t be a center fielder for the Camels. He’ll play one of the outfield corners, and he has enough arm to handle right field.
He’s a good all-round athlete. He went at it year-round at Carson. He had 25 catches and scored three touchdowns as a two-year starter at tight end in football and he also was the first Cougar to qualify for the 3A state swimming meet in the 100 freestyle.
His natural tools translated best to baseball, where he was a two-year starter for the Cougars. Besides having a strong arm, he’s a lefty hitter with size. He’s 6-foot-3 and still maturing physically.
“I went to college at 185 pounds, but we spend a lot of hours in the weight room,” Tonnesen said. “I’m up to 200 pounds now.”
The best part of Tonnesen’s freshman season was the team success. Campbell went 41-21, winning 40 games for the third straight year, and Tonnesen participated in the delirious dogpile after Campbell won the Big South Conference Tournament.
“Just being part of a team that won a championship was awesome,” Tonnesen said.
Tonnesen’s only RBI of the season was awesome for him. It came on a sac fly against Manhattan.
“Everything here is about team over self, so I just went up there trying to do my job,” Tonnesen said. “That was my first college at-bat, and it felt good to accomplish a goal and drive in a run.”
Campbell’s season ended in the regional at Columbia, S.C., one of the nation’s hotbeds for college baseball. Being involved in that kind of atmosphere provided a lifelong memory for Tonnesen.
“When you’re a kid growing up, that’s exactly what you dream about,” Tonnesen said. “That’s a beautiful field and a beautiful stadium, and it was sold out. I felt like I was in the major leagues.”
Campbell’s head coach Greg Goff left Campbell in June to try to rebuild the Louisiana Tech program.
While Goff did an amazing job in his seven years in Buies Creek, there’s no reason to think Campbell’s program will miss a beat. Goff’s successor, Justin Haire, was Campbell’s associated head coach, recruiting coordinator and hitting instructor.
Tonnesen is doing his best this summer to preprare to compete for playing time as a sophomore. What he needed most was quality at-bats and he’s getting them in the South Florida Collegiate Baseball League. Tonnesen competes for the Coral Springs Canes, in the Fort Lauderdale area, and is swinging a wood bat against experienced college pitchers.
He’s played in 16 of the Canes’ 17 games and he’s 8-for-32 with four RBIs. He’s also walked eight times. He scored four runs Saturday as the Canes swept a doubleheader.
While most of Tonnesen’s teammates stay with host families, he has the benefit of residing with an aunt and uncle who live 30 minutes from the Canes’ ballpark.
“That’s really kept the cost down,” Tonnesen said with a laugh. “It’s been a lot of fun. This is low stress and low tempo compared to college baseball, and when I’m not playing ball I’m usually on the lake fishing.”
Tonnesen is pleased with the baseball progress he’s making, and he wouldn’t change anything if he had to make his college decision over again.
“It’s going well,” he said. “Campbell is a great fit for me.”