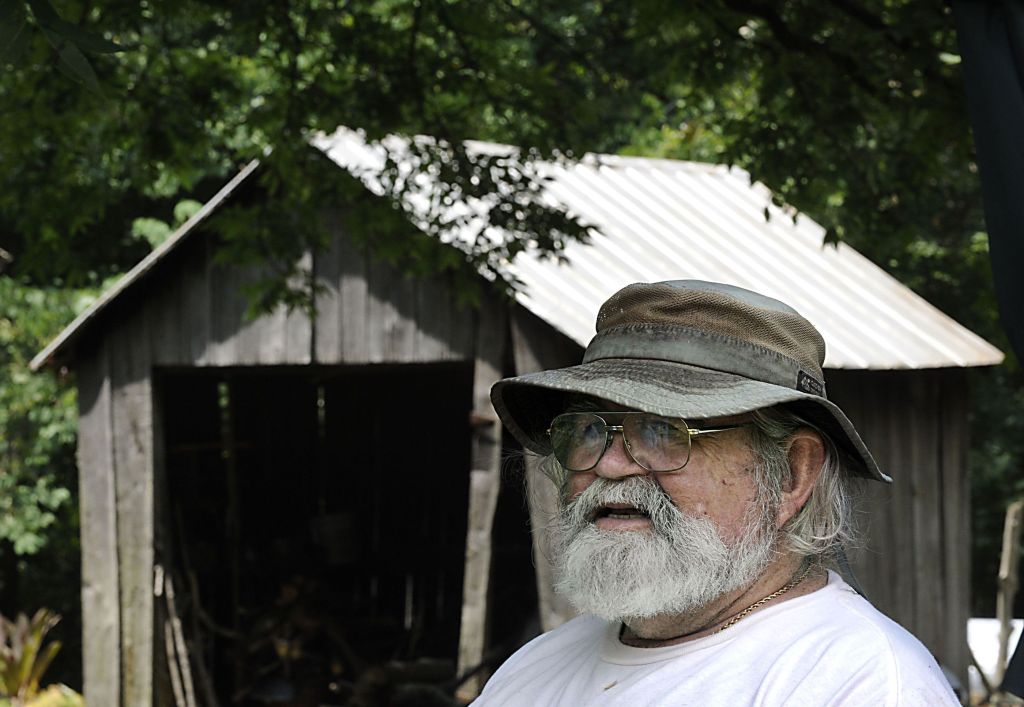 Steve Martin pulls a thick holly branch from the woodpile behind his house on Old Beatty Ford Road.
With a handsaw, he shortens the branch to the length he wants. Standing the branch on end, he positions the sharp end of a froe – a tool used to cleave wood along the grain — on its soft center. With a hammer strike, he drives the froe, splitting the branch in half.
Martin picks up one half of the branch. He likes its slight curve.
Using a broad hatchet, he chops away at the outside of the half-branch, sculpting it, looking for the shape he knows is inside. Another minute or so and that shape starts to emerge and becomes recognizable as a spoon.
Before Martin’s done, he’ll use a hook knife to dig out the bowl of the spoon and a carving knife to perfect its handle. He’ll finish it with oil and have a work that’s suitable for showing off and sturdy enough for everyday kitchen use, a claim he and his wife have tested.
“We have several, but one’s almost 30 years old,” he said.
Martin traces his woodworking roots to a Saturday afternoon in the late 1960s. Watching TV, he switched the channel to PBS and saw Roy Underhill doing “old-timey woodworking” on his show, “The Woodwright’s Shop.”
“Somehow, it just got my interest,” he said.
He piddled with the craft over the next couple of decades, all the while accumulating tools of the trade. It became more than a diversion after he retired in 2000 from the State Health Department.
“My wife said, ‘You need a hobby,’ ” he recalled. “… I got serious about it.”
Serious might be an understatement. Martin does everything the old-fashioned way, by hand and, in some cases, other extremities. In 2003, he built his own foot-powered lathe — one of a handful he knows of in the state — “to demonstrate to kids and other people how an old-timey wood lathe worked.”
Martin demonstrates his skills at local schools, history camps, fairs and other events. He also teaches classes he calls “Carving 101” to people who want to learn to carve wooden spoons. The next one-day class is Aug. 23 at River Pines Art in Gold Hill. (See accompanying article for details.)
The classes started when the grandson of two friends — River Pines owners Lennie and Ann Cooper — wanted to learn to carve a spoon. Others wanted to learn, too, but they couldn’t make it to that first session.
“So I set up another one and another one. … Now I’ve been doing it almost a year, every three months,” Martin said.
Martin doesn’t only find spoons in the wood.
He carves kuksas, which he describes as half-bowl, half-spoon creations eastern European soldiers serving the British army in the colonies would make themselves from local trees.
He can show you his hand-made spurtles, derived from Scottish kitchen utensils used to stir porridge.
He even builds benches.
And some of Martin’s most impressive work might be the large bowls that look like they belong in an art exhibit. In fact, the biggest thing he’s carved was a bowl measuring 36 inches long, 16 inches wide and 6 inches deep.
“A woman asked me to make it, and I made it, and the woman said it was too big,” Martin said. And the woman’s husband said he didn’t want to pay what the bowl cost after Martin put 100 hours into producing it.
That bowl was made of cherry, one of Martin’s favorite woods. He also likes back walnut, maple and birch, some of which he finds on his own nine acres and some that friends and acquaintances offer him when they or storms or age fell trees on their property.
And other people don’t mind paying for them. Particularly in demand, he said, are creations with spalting, a coloration in the wood caused by fungi.
But Martin can tell you all you want to know about hand-carved wooden spoons, and the multitude of shapes, sizes and origins, including Celtic spoons, intricate Welsh wedding spoons, long-handled Swedish spoons.
And it’s the spoons that hook people.
Martin recalled a day a couple of summers ago when he was at the Old Stone House in eastern Rowan for a history camp. A limb had fallen from a dogwood tree, and the camp director told some boys to fetch it for firewood. Martin noted the wood was too green and wet to burn well, but he had a use for it.
“Before they went home that afternoon, I had carved a spoon,” he said, “and they were amazed.”
Last week, Martin was preparing for another camp at the Old Stone House, loading his lathe, tools, wood and examples of his work into a van parked beneath a sprawling chestnut tree that seemed to throw shade wherever it was needed by his home on Old Beatty Ford Road.
And for all the festivals, the sales, the classes, Martin said that’s still his favorite thing about his serious hobby.
“I just enjoy that,” he said, “sharing with kids how our forefathers came to this country with few tools … and made everything they needed to survive in the wilderness.”
Starting with a piece of wood that can contain just about anything, even a spoon.
• • •
If you’d like to see Martin demonstrate his woodworking, some of his upcoming appearances will include Autumn Jubilee at Dan Nicholas Park in October and Old Timers Day at Morrow Mountain State Park in November. Some of his work is on sale at River Pines Art on St. Stephens Church Road in Gold Hill.