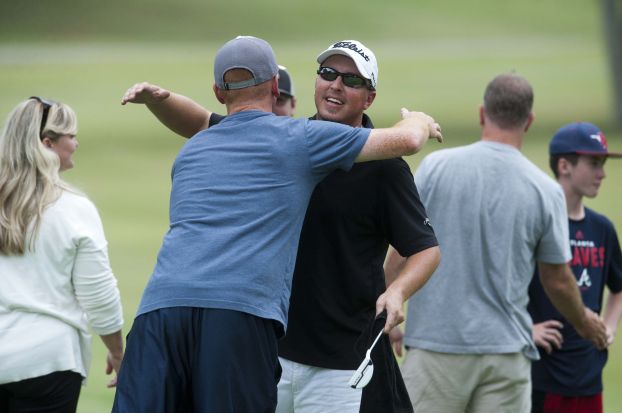 SALISBURY — Eric Mulkey sank a putt to win the Horace Billings Rowan Amateur, and delivered his Sunday-best fist pump on Hole No. 17 at Corbin Hills Golf Club.
The 33-year-old then quickly unclenched his fist to shake hands with seemingly all of the gallery, consisting of around 20-plus carts, who spilled out toward the flag to congratulate him.
It was as close as you’ll see to fans storming the green. Consider it a standing ovation for the performance that finalists Mulkey and Nick Lyerly put on. The ending, with Mulkey winning his first Rowan major, was a crowd-pleaser.
“That makes me feel like everyone appreciates me and respects me,” said Mulkey after winning 2 and 1. “I appreciate them and respect them as well. It was great to see. I don’t think I’ve ever seen a bigger crowd out here.”
Mulkey, who hadn’t played in the Amateur in several years after having kids, was a bit-part actor who turned out to play the lead role in the 36th edition of the tournament. Seeded 11th with a qualifying score of 72, Mulkey bounced the 15-year-old Lyerly in the final with the 12-foot putt that washed away the sins of the previous hole.
“Right before I putted I had a little moment of silence,” Mulkey said. “I had to regroup to three-putting 16 and just needed to redeem myself. When I hit the putt I said ‘Just make sure it gets a chance to go in.’ I knew it was going in as soon as I hit it.”
No. 16 was an anomaly on an otherwise sound day for Mulkey, who nearly faced his younger brother Tyler in the final. He rarely missed a green and walked away with just one bogey in the championship round. He sliced up fairways and placed himself near pins with laser precision.
“I wanted to play aggressive,” Mulkey said of the final few holes. “I didn’t want to let off the gas pedal, so to speak.”
Mulkey topped perennial contender and qualifying medalist Kevin Lentz 2 and 1 in the semifinal morning round. The final featured an even slate until Mulkey won No. 13 and then No. 14 to gain a two-hole edge.
Before edging Lentz, Mulkey beat two-time Amateur champ Keith Dorsett 1-up in the quarterfinal on Saturday.
Lyerly proved a worthy competitor and stuck with Mulkey. The East Rowan rising sophomore won at No. 16 to pull within a hole. Mulkey hit a 7-iron from about 150 yards away to get to the green in two shots with Lyerly. Lyerly misfired on a long putt to give Mulkey a chance to win.
“He putted a lot better than I did,” Lyerly said. “I missed some putts that I should have made. That was the difference.”
Mulkey, who played for two state championship teams at Salisbury High in the 1990s, reached his first final in 2009 and lost to Ryan Honeycutt. This time, he left little to chance and came in focused on No. 17.
“I didn’t want to go to 18,” Mulkey said. “I wanted to end it right there. I tried to play aggressive on that hole.”
Playing in only his second Amateur, Lyerly, the five seed, beat Tyler Mulkey 4 and 3 in the semifinal. Tyler Mulkey had reached Sunday by winning all three rounds after a playoff.
Lyerly made a 20-foot putt for birdie to go 1 up on No. 3. Mulkey was 1 up through eight holes. Lyerly won No. 10 to knot it back up. The next two holes featured ties until No. 13.
Mulkey came close to the pin on the 13th, a par-3 hole, and tapped it in to take the lead for keeps. He then won No. 14 to gain distance.
“He was tough,” Mulkey said of Lyerly. “He hit fairways and greens. I felt like I was doing everything I could to stay in the match. I got a couple of breaks in the middle of the round.”
Lyerly edged Honeycutt, a three-time champion, 4 and 3 in the quarterfinal and Brandon Cranfield and Andy Lombard in the earlier rounds. Lyerly says he’ll play in the Labor Day Tournament with Steve Gegorek.
“We both played great,” said Lyerly of the final. “He was a little bit better. I went up one early and he got it right back. It was either all square or he had the lead the rest of the way.”