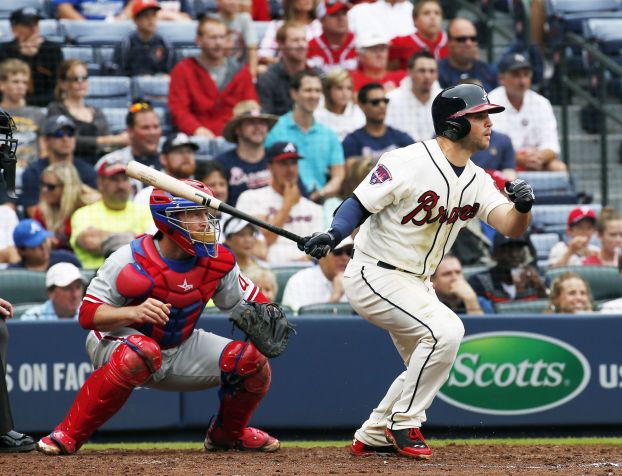 ATLANTA (AP) — Tommy La Stella is making an impression on Atlanta Braves manager Fredi Gonzalez.
Since coming to the big leagues in late May, La Stella is 6 for 7 with the bases loaded, driving in 13 runs in those at-bats.
“When we got him from Triple-A, all our minor league and player development people said that this guy can hit,” Gonzalez said after Sunday’s 8-2 win over the Philadelphia Phillies. “He can find the barrel with the ball. He sure has done that. Hopefully, that continues.”
La Stella drove in three runs and Chris Johnson hit a two-run homer to back Alex Wood. The Braves have won of five of seven and remained second in the NL East, one percentage point back of Washington.
Wood (7-7) allowed one run and three hits in six innings with eight strikeouts to win for the first time four starts. He retired his last 13 batters.
The first five innings were played in a steady drizzle before heavy rain caused a 1-hour, 39-minute delay in the middle of the sixth.
Philadelphia took a 1-0 lead in the second when John Mayberry Jr. homered, but the Braves went up 2-1 in the bottom half on Johnson’s seventh homer.
Phillies starter Kyle Kendrick (4-10) got in trouble in the third, walking B.J. Upton, hitting Freddie Freeman with Justin Upton with pitches and forcing in a run with a bases-loaded walk to Jason Heyward that make it 3-1.
After Johnson lined out, the Braves went up 6-1 on La Stella’s three-run double. La Stella’s latest big hit came two days after the second baseman he replaced, Dan Uggla, was released.
La Stella relishes getting a chance to bat with runners in scoring position.
“You’re going to find yourself in those situations whether you want them or not,” La Stella said. “I think it goes a long way to see yourself in those situations and see yourself succeeding.”
Kendrick gave up six runs, five hits and two walks in five innings, dropping to 1-4 with a 6.99 ERA in his last six starts.
“It’s been a tough year for me,” he said. “I don’t know why. It’s just been a bad year. Guys have bad years. So far, that’s how it’s been. Just keep pitching.”
Wood, who returned to Atlanta’s rotation on June 25 after nearly seven weeks in relief, improved to 4-6 with a 2.95 ERA in 12 starts.
“It felt pretty good when (Johnson) hit that two-run homer, so that was definitely a big confidence booster for me,” Wood said. “After he did that, I felt like I could kind of take the game over, and that’s what I was able to do.”
After the rain delay, Phillies reliever Mario Hollands gave up two runs in the sixth on Andrelton Simmons’ bases-loaded walk and Freddie Freeman’s RBI single.
Philadelphia has lost four of five and dropped 11 games back in the NL East. Just 9-42 when scoring three runs or less, the Phillies missed a chance to score with the bases loaded in the eighth when Jimmy Rollins grounded into a double play and Chase Utley popped up.
Marlon Byrd hit his 19th homer in the ninth off David Carpenter.
NOTES: When Mayberry misplayed Kendrick’s pickoff attempt nf B.J. Upton in the third, it was Philadelphia’s first error in 78 innings. … Phillies LHP Cliff Lee is expected to return from the DL Monday at home against San Francisco after missing nine weeks with a strained left elbow. In six career starts against the Giants, Lee is 5-0 with a 0.88 ERA. … Braves C Evan Gattis, sidelined since June 29 with a bulging disk in his lower back, is expected to end a rehab assignment and return to the lineup for Monday’s home game against Miami. He went 2 for 6 with two RBIs Sunday as designated hitter for Triple-A Gwinnett. … RHP Julio Teheran starts Monday for the Braves and is 4-0 with a 2.50 ERA in six career starts against the Marlins.