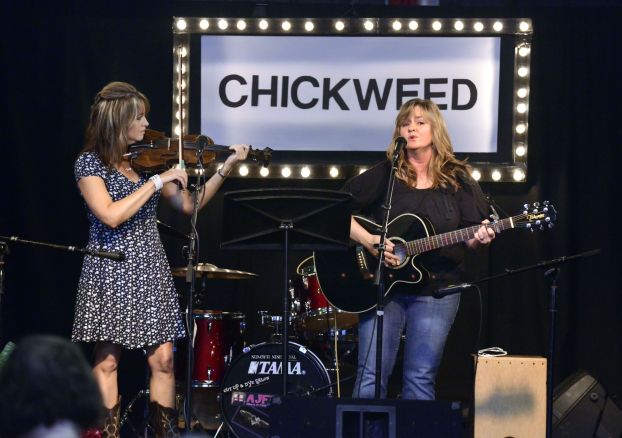 As April Turner told stories to a drum beat, people crowded toward the front, away from the open rear door where rain dripped onto the concrete. Turner encouraged the audience to clap, or directed them to wave their hands as part of her “Storytelling Through Dance” performance at Saturday’s Chickweed Festival.
Umbrellas filled the closed off section of North Lee Street as people gathered to browse a variety of vendors, or huddled inside to listen to a wide range of female musicians and performers.
Chickweed: Celebrating Indestructible Women got its start in 2012 when seven local women wanted to create something by women, for women. They got Chickweed off the ground and decided to donate all proceeds to the Family Crisis Council of Rowan County, a local nonprofit organization that aids victims of domestic violence in Rowan County. It was an instant hit, and has been gathering momentum ever since. This year, Mayor Paul Woodson officially declared July 19 to be Chickweed Day, and the week of July 12-19 to be Chickweed Week for Salisbury.
Founder Sue McHugh says she looks back on the past three years and is overwhelmed by the support Chickweed has received.
“I don’t know another event as warmly embraced by the community,” McHugh said.
For the first time, McHugh says, community volunteers stepped in to help the Chickweed crew and the Family Crisis Council set up for the event. Performers came from Charlotte, Asheville and Texas, and Chickweed had to refuse a large number of vendors and performers, McHugh said, because there wasn’t time or room enough for all of them. And before the festival even got started Chickweed received $8,000 in unsolicited donations — twice what the event raised for the Crisis Council last year. If it keeps expanding, McHugh said, Chickweed may become an all day event, or have to switch venues from the Spoken Space Theater to somewhere larger.
Renee Bradshaw, executive director of the Family Crisis Council, said when Chickweed contacted her in 2012 to ask about support for her organization, she was a little overwhelmed. But, she said, it’s become a great blessing.
“It has grown to be a phenomenal event.” Bradshaw said.
Bradshaw is grateful not only for the support, but also for the awareness that Chickweed raises. The Family Crisis Council had a tendency to fly under the radar, she said, but not anymore. The support they’ve has received from Salisbury has been incredible, Bradshaw said. “We’re thrilled that the community is standing up for women and children that are abused,” she said.
Despite rainy weather, Chickweed attracted a large crowd. For many, such as Alice Rich, it was a first experience. Rich heard about Chickweed via Facebook last year and says she’s been looking forward to the event ever since.
Rich says that to her, Chickweed exemplifies what she loves about Salisbury: community. She loves the close, welcoming feel of the festival and its focus on the arts, as well as how it interweaves and supports many other festivals — such as the Friday Nights Out and Salisbury Pride, which support Chickweed in return.
“Everybody is excited to be around that,” she said
Brian Romans and Jessica Buckwalter run a table at Chickweed for the Salisbury Arts Station, and have attended the festival every year. They were pulled in by McHugh, and say the one thing they’ve noticed is that the festival keeps getting bigger. They hope it will continue to grow.
While they’ve changed the focus of their table every year, this time they invited people to create small paintings which they will use to create a larger piece for the Family Crisis Council.
Another first-time attendee, Margaret Almeida, became involved via the Family Crisis Council. Almeida is the pastor at Second Presbyterian Church, and her congregation has supported the non-profit for years. She said so far, she loves the festival and its atmosphere of fun and celebration.
She’s lived in Salisbury for 20 years, and says it’s easy to think that you know everyone, but going to events like this, where there are people from all walks of life, proves her wrong. “It’s a great opportunity to see the wealth of the community,” she said.
For Bradshaw, Chickweed is a night like no other, and she can’t thank McHugh, the vendors, performers, and community enough for all they’ve done, or be more proud of them for taking a stand against domestic violence.
“This is a time for celebration,” she said.

Pedaling over 3-mile bridge no fun when wind picks up

When I went to bed last night, I had a plan for today. But after a good night’s sleep, I... read more