Pedaling over 3-mile bridge no fun when wind picks up 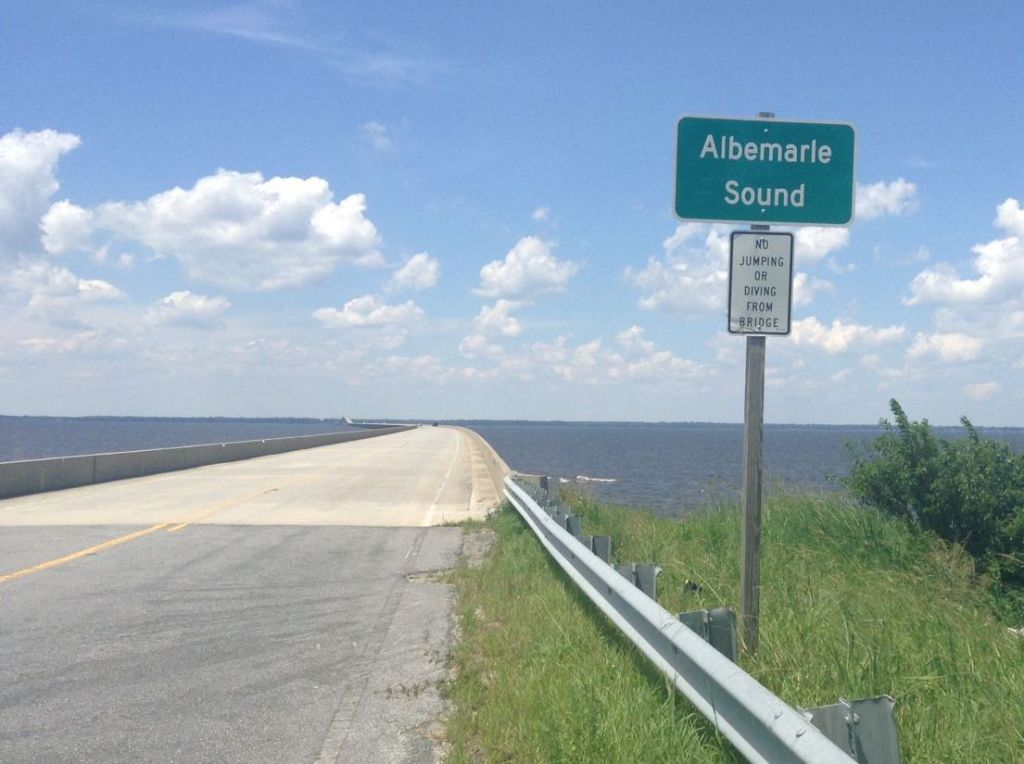 When I went to bed last night, I had a plan for today. But after a good night’s sleep, I got up and thought about another route. Quickly putting it together, I left Suffolk, Va., just as the sun was rising.
I rode through town heading south with not much worries about traffic. My new planned route was to follow Highway 32 for most of the day, eventually arriving at Historic Plymouth, N.C.
The road was light in traffic to start, and wide enough to be comfortable even if there was not much of a shoulder. The first little town was Sunbury. Not much reason to stop, so I continued on.
A crop dusting plane just happened to be climbing and diving along the road, so I had plenty of interesting entertainment.
Right away, I found myself on new pavement. To a loaded bike, this is the best music. A smooth ride is so pleasurable and nothing makes it happen like new pavement.
I saw a worker named Clifton holding a stop sign as I approached some of the road work. I asked him if I had to stop, and he said, “No, but all these cars have to. You can go ahead, but just don’t hit anything.”
This was a lot better than I heard last year in the Grand Teton’s when the pavers tried to pull me off the road.
Next, I stopped at the only convenience store around and James Cullins asked about my ride. He was on his own bike, and at the store to pick up gas. I got a couple of egg, cheese and tomato sandwiches to fuel my own engine.
The road was only gently rolling, with lots of very flat stretches. I noticed that my bike was acting up a little, not shifting the chain as it should. There is a visit to a bike shop in my near future.
I began to see major chunks of swamp along the road. Part of it is the Great Dismal Swamp. There was black water and green water. Once, I thought I saw a small alligator run into the water as I went by. George Washington had acquired some property in the area and tried to drain part of the swamp with limited success.
On I went past massive fields of cotton and soybeans. There were lots of well kept farms and some of the cleanest roadsides I have seen in any place across the country. I passed near Hertford, the home of Jim “Catfish” Hunter, a great Yankees pitcher who died of ALS.
Edenton was the biggest town of the day, and I hoped to find a bike shop. As best I can tell, they don’t have one. Ice cream at McDonalds hit the spot in the meantime.
When I changed the route early this morning, I did it mainly because I could see that Highway 32 crossed a large body of water. Suddenly, I saw the Albemarle Sound and a bridge that was about three miles long. For most of the morning, I had a gentle tailwind, that suddenly turned into a headwind as I approached the Sound. Pedaling got harder, but nothing like it did when I actually went on the bridge. My bike lane was about 3 feet wide, and the gusts pushed me perilously close to the edge. I crossed to the other side of the road and then only had to worry if the gusts pushed me into the oncoming cars. That seemed to be the better option. After what seemed like half an hour, I came off the bridge and found myself pushed by a tailwind again.
That tailwind made my focus better as I pushed the last 20 miles toward Plymouth. People all along the way were out in their yards and most waved as I went by. With about 10 miles remaining, I stopped to confirm directions with a painting crew at a historic church. Tyler Reed, Robby Wright, and David Oliver were painting the Pleasant Grove Methodist Church’s roof. That roof was steep and they looked to be almost done.
On to Plymouth, and with the help of a resident, I found a motel. Another good buy Susan! Then I took a ride over to the waterfront. The Roanoke River has its own lighthouse and Plymouth has a claim to the last Confederate victory in a land battle in North Carolina. The Confederate Ironclad CSS Albemarle was sunk while moored at the Plymouth docks.
Total mileage for today was again 90. It was an easier day, especially with the headwind behind me. Tomorrow, I hope to find a bike shop in New Bern or somewhere else nearby. Rain is predicted, but I should be in Wilmington in two days. Every day is another adventure!
Rowan County resident David Freeze is cycling from Bar Harbor, Maine, to Key West, Fla. Contact him at david.freeze@ctc.net.