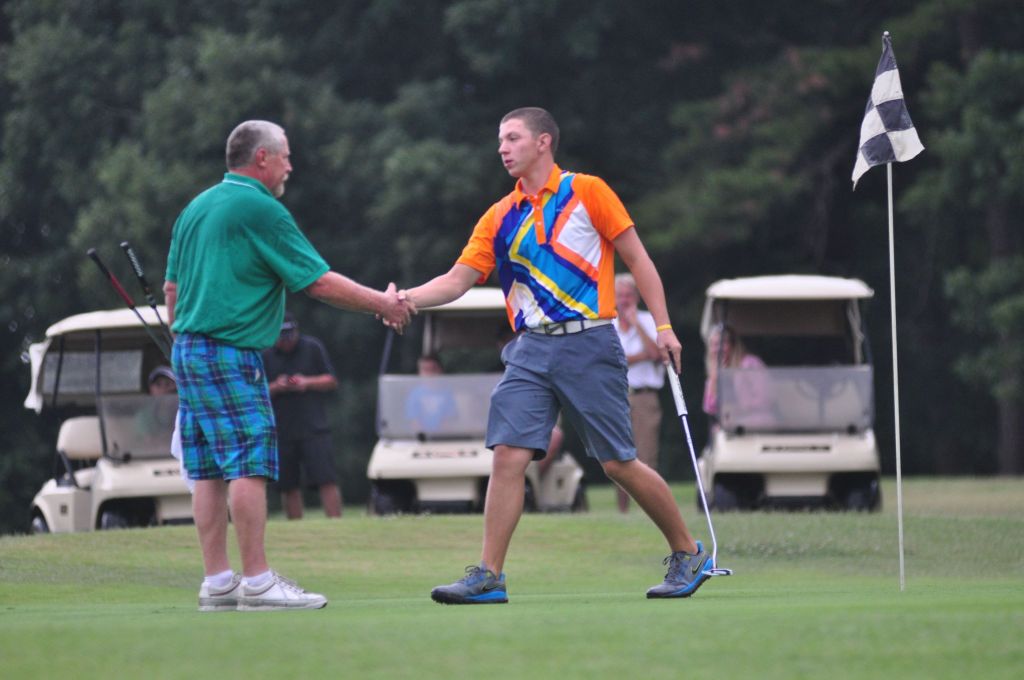 SALISBURY — After three rounds, the 19th hole is Tyler Mulkey’s favorite at the 36th Horace Billings Rowan Amateur.
For the third straight round, Mulkey beat his opponent in a playoff hole to join his brother Eric Mulkey in reaching the semifinals at Corbin Hills Golf Club this morning.
Rain didn’t effect the Mulkey parade Saturday, as Eric upended Keith Dorsett by a 1 up margin to advance to the final day like his younger brother. The siblings join Kevin Lentz and Nick Lyerly in the fourth round today.
“Mixed emotions tomorrow,” Eric said from the clubhouse. “I’ll be pulling for him and pulling for myself as well. It’d probably be the first time ever two brothers would be playing each other.”
Tyler, an All-County player this year on the prep scene, is playing in his first Amateur. He beat Shane Benfield in 19 holes Friday.
“It’s somewhere I didn’t expect to be,” Tyler said. “I played good, especially on the 19th hole.”
The recent North Rowan High graduate trailed George Benfield by a hole heading to 18 before taking the must-win hole and heading over to 1. Tyler didn’t get the tee shot he wanted, hitting into some trees to the right of the fairway to set up a difficult second shot.
After his ball hit a tree branch on its ascent, it landed on the green about 10 feet from the hole. Tyler punched it in for a birdie to end a fun day for a sizable gallery.
“I was trying to just get it on the green,” Tyler Mulkey said. “I hit it really good on the second shot and putted it in.”
In the morning round, Tyler Mulkey edged fellow young buck Logan Shuping in 19.
Eric, who paired with Dorsett to win the Labor Day 4-ball Tournament in 2004, upset Dorsett, a mainstay in local majors.
Eric was two holes down at the turn and won the next four holes to assume control. He birdied 11 to go 1 up and birdied 12.
“He’s one of the toughest to beat out here,” Eric Mulkey said of Dorsett. “I hit the ball solid and didn’t let getting down early bother me. I hung in there and felt like things would go my way eventually.”
Eric has been in the final before, having lost to Ryan Honeycutt in 2009.
Lentz beat Steve Gegorek 5 and 4. Lentz, who was the qualifying medalist with a 67, birdied 1, 6, 7 and 14 to move to his first Amateur semifinal. Lentz faces Eric Mulkey this morning.
“Every time I play with [Gegorek], he’s around par,” Lentz said. “This is the first time in the semis and I’m excited.”
Lentz beat Drue Davis 4 and 3 in the morning round.
Lyerly, a rising sophomore at East Rowan, beat Honeycutt 4 and 3. Playing in his second Amateur, Lyerly, seeded fifth, fell behind after the first two holes before getting a few birdies to acquire the lead.
“I was down the first couple of holes,” Lyerly said. “I was able to get some birdies.”
Lyerly faces Tyler Mulkey, whom he qualified with, in the semifinal.
“It’s nice to make it to the final day,” Lyerly said. “It’s definitely more than I would expect.”
Semifinal tee times are scheduled for 8:30 a.m. The final will take place around 12:45 p.m. Complete results of Saturday’s action are in scoreboard.