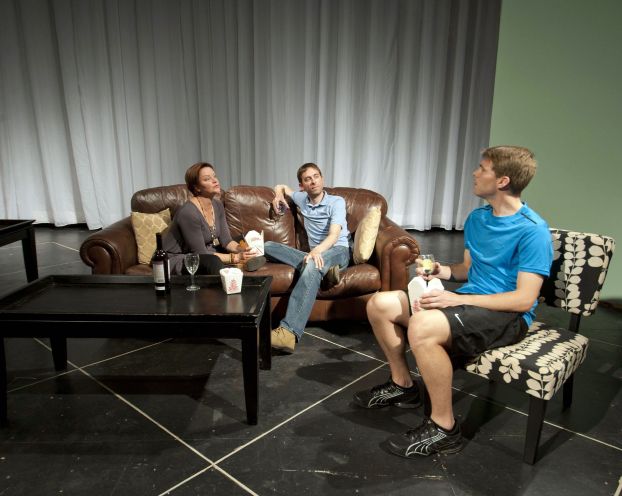 “Next Fall” is a sensitive play about love and its many forms. It has humor, tenderness, anger, fear, redemption — all the things that make us human.
St. Thomas Players’ production at Lee Street theatre is well worth your time, especially if you’ve gone through the loss of someone you love. It is the story of a gay couple who love each other despite the vast difference in their beliefs — one is Christian and the other has no belief whatsoever — and the people who love them.
Director Jennifer Hubbard gathered an excellent cast and treats the play with the good-heartedness that it needs. Sponsored by Salisbury Pride and the Cataldo family, “Next Fall” brings an important discussion to the stage.
Luke, played by the adorable and charming Patrick Hogan, is the Christian who says grace before meals and urges Adam, the non-believer, to accept Jesus so they’ll meet again in heaven.
Tony Moore is the right actor to play Adam. He has so much appeal and is so comfortable on stage that the audience immediately identifies with him. Adam has some serious questions about sin and forgiveness and Luke tries to explain his beliefs. Luke knows what he’s doing is a sin, but is convinced that knowing Jesus and praying will ultimately save him. Adam doesn’t believe in anything, not even himself. He’s a hypochondriac, always assuming he’s going to die, so it’s ironic that Luke is the one who is desperately injured in a traffic accident.
Moore plays Adam’s insecurities and self-searching with the right amount of finesse. As the two argue about faith, it’s sad to see them so far apart in understanding. Sad that this one thing is an insurmountable barrier.
Luke is a young man comfortable in his sexuality, until it comes to his parents, who still don’t know. It sort of stretches belief that they don’t. There are so many signs.
His hard-driving father is disgusted by the mere idea, and a firm believer in every letter of the Bible, literally. He never understands who Luke loves and who loves him back. But Butch loves him, and he’s taught Luke a lot, given him his faith. Barnet Sherman is Butch, a hard-driving successful man who wanted Luke to be a lawyer. He finally admits Luke is a good actor and he’s happy that his son is happy. Sherman takes on a tough role and makes Butch come to life.
Luke’s mother, played excellently by Carrie Poole, is a mess left over from an earlier era. She was not there for Luke. She couldn’t take the pressure of raising him, yet he needed her so much. Poole captures the role so well and plays it with such genuine emotion that it’s hard to fault her, no matter how self-centered and flighty she is. She comes to see the truth of Adam and Luke’s relationship.
Alice Rich is very sympathetic as Holly, one of Adam’s friends, who comes to love Luke, too. She is a sort of sounding board and peacemaker for them, a nurturer they both need. Rich thoroughly becomes Holly.
Tim Campbell is strong as supporting character Brandon, who loved Luke, and loves his Bible. He creates a strange line in his head for what’s right and what’s wrong. He and Adam are not friends, but Adam needs someone to help him understand Luke.
The play is a good example of opening up a tough subject and treating it in a sensitive way. There’s no open condemnation, no ugly confrontations, though one comes close. Its message really is this: We must love one another while we can, accept our differences and compromise. We don’t know how long we have in this world. Forgiveness is always possible.
“Next Fall” is a good choice for St. Thomas Players, which seeks to “explore and enhance the close relationship between the arts and one’s spiritual life.”
Performances continue tonight and Saturday and July 24-26 at 7:30 p.m., with a matinee this Sunday at 2:30 p.m. at Lee Street theatre. Tickets are $15 general admission and may be purchased at www.leestreet.org/tickets or by calling 704-310-5507.