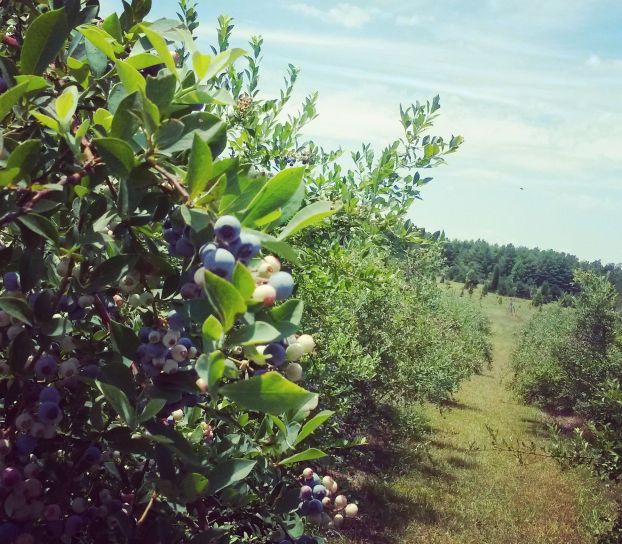 Blueberries are busting out all over

It has been around 30 years since Bryce Kepley first experimented with growing blueberries at the back of his Christmas Tree field, the aptly named “Pinetop Farm” on the big bend in Majolica Road. From the street you can’t see them but the smell wafts in the air.
He will be the first to tell you North Carolina’s blueberries usually come from the eastern part of the state. Whether it is the high water tables, or the acidity he is not sure. However Bryce is making out just fine here in Salisbury. No soil treatments are used at the Pinetop Farm. It is genuine, unaltered Rowan County soil in which Bryce’s seven varieties of “Rabbit Eye” blueberries are thriving.
Even in this dry summer, with his irrigation systems down, Bryce is experiencing what he would call a “Blessing in Disguise.”
The berries are still plump, and because the excess water has not diluted them, they carry an incredible flavor. The same kind of blessing occurred when Bryce’s berry pickers went on to find new work. He simply opened his two acres of blueberries up to be a pick-your-own.
Bryce offers red buckets for customers to pick their blueberries in and he already has his scales set to counter their weight. He has regulars who bring their own buckets, he knows the weights of those as well. Charging only $1.70 per pound he has made himself very attractive to families.
Pine Top farm provides an easy entrance on one side and exit on the other so traffic can flow through smoothly. He uses no pesticides and keeps his berries 100 percent genetically modified free. While this might not sound like rocket science, he is an engineer, and on the other side of Salisbury at Talia Farms, a Nasa employee operates a blueberry farm.
Heather and Bob Altizer never set out to be blueberry farmers. It found them in what Heather identifies as a spiritual calling to get involved in the community.
Blueberries were chosen after realizing it would be in poor taste to plant what the neighbors were planting. Talia Farms is, after all, located on Goodman Lake Road, commonly called “Produce Road.” The couple have taken to their blueberry cultivating pretty seriously. Their property is now the home of 2,000 plants with Heather and Bob doing all the picking and packing.
Blueberries are not the easiest crop to grow in Salisbury. When they started planting on Valentine’s Day of 2009, the couple had many obstacles ahead of them. The clay soil is not the same as the sandy acidic kind to the east, or out by the coast.
There are more problems than soil and climate. A buck in rut season can tear down a six-foot blueberry in an attempt to remove the velvet from its antlers. The state biologist of North Carolina cannot say why the coyotes often chew their irrigation lines. Heather suspects it is the babies, teething.
Those behind Talia Farms say it’s a misconception that local blueberry growers are in competition. Heather says there is an abundance of demand to go around.
Emphasizing it is not easy to grow them here, first time customer Rose LaCasse wanted to buy berries because her own plants are not doing well. Heather quickly diagnosed the yellow but not blue berries as a pH balance misfire.
Meetta Lampert arrived to purchase three pints to replace the three plants she lost this year. Growing blueberries in the Piedmont area of North Carolina takes persistence, overcoming obstacles and a struggle — all making for a better berry.
A few miles away, Randy and Pam Elium at Elium Berry Farm knew they could grow blueberries when they saw wild huckleberries growing on their property — the plants are of the same family.
Sure enough, the natural 4.9 pH of their soil has remained unchanged since 1986 when they began the endeavor.
Having a beehive on location assists their pollination.

July the time to celebrate many foods